Two weeks after discussing the Ultimate Museum PC, the first “new” hardware components arrived (nearly all on the same day). Chief among these are two motherboards: Supermicro P6DBE and ASUS P2B-DS. The boards are very similar, yet quite different. Just like the old BP6, they’re dual-processor boards built around the Intel 440BX chipset, using many of the same hardware components.

Before discussing the boards further, a quick refresher on Pentium II/III class processors; the various models are typically referred to by their codename, since Intel’s designations leave out far too much crucial detail. Only desktop models are mentioned here:

Coppermine and Tualatin processor existed in Celeron versions as well. Those had smaller cache, slower FSB, and did not support SMP at all (unlike the Mendocino Celerons). There are no known 440BX-based boards which support the Tualatin CPUs natively, but adapters (slockets aka slotkets) do exist. The latter-day 440BX (Slot 1) boards supported all Pentium II/III processors from Klamath up to Coppermine without any adapters or hardware hacks. Taking into account Slot 1 processors only, that means CPUs ranging from 233MHz all the way up to 1GHz!

Now back to the newly arrived boards. The Supermicro P6DBE is a no-nonsense board for users who care about getting work done and stability rather than messing around with various tweaks and overclocking. I was lucky to get a revision 3.0 board which natively supports Coppermine CPUs. That however requires a sufficiently new BIOS. Fortunately I happened to have an old 233 MHz Pentium II lying around, a processor which is supported by even the oldest BIOS versions and therefore suitable for upgrading the BIOS. 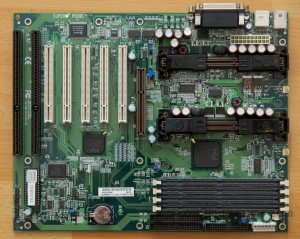 The P6DBE only supports the standard 66/100MHz FSB frequencies. With four DIMM slots it can house up to 1GB RAM. PC-133 SDRAM usually works, but there’s a catch: 256MB DIMMs must be organized as two rows, otherwise the chipset only ‘sees’ half of the capacity. This is common to all 440BX-based boards.

The P6DBE has one AGP slot, five PCI slots, and two ISA slots—the reason for getting this board! One of the slots is shared (either ISA or PCI but not both). The board came with adaptable retaining clips for Pentium II/III processors, as well as a TRMS1 terminator for use with a single-CPU configuration.

A bit of a drawback is the fact that the Supermicro board uses AMI BIOS with the silly graphical setup. But the board works and was tested with two 850MHz Pentium III processors.

Apart from the onboard Adaptec AIC-7890, the P2B-DS hardware is rather similar to the P6DBS, but the similarity is deceptive. The ASUS board is far more customizable, with supported FSB speeds of 66/75/83/100/103/112/133MHz. The AWARD BIOS also offers more options than the AMI BIOS. As an added bonus, the latest P2B-D/P2B-DS BIOS revisions even support Tualatin processors, something which is not available on the P6DBE. 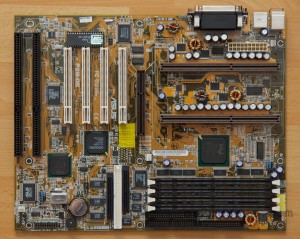 I was again lucky and the P2B-DS is a revision 1.06 board with native support for Coppermine processors.

The P2B-DS also supports up to 1GB RAM in four slots, with the same caveats. It includes one AGP slot, four PCI slots, and two ISA slots (yay!); no slots are shared. For whatever reason, the P2B-DS did not come with any retaining clips.

The CPU slots on the P2B-DS are noticeably closer than those on the P6DBE, but the capacitors right next to the slots are lower. This is something to consider when choosing cooling options. Again the board was tested with two 850MHz Pentium IIIs and appears to be working just fine.

Both boards are laid out better than the ABIT BP6; the IDE/floppy connectors are right next to the memory slots, closer to the drives in a typical case. Both boards are well labeled with crucial jumper settings clearly marked on the PCB; as a result, the manual is often not required. That said, both manufacturers still offer the respective manuals (and BIOS updates) on their sites.

It’s too early to settle on a final choice of components, but the current Museum PC is built around the Supermicro P6DBE board using strictly standard components and settings—no overclocking, no adapters, no hacked BIOSes. The board is equipped with two 850MHz Pentium III Coppermine processors (100MHz FSB), each with 256KB full-speed L2 cache, S-spec SL43F. There are four 256MB PC133 SDRAM DIMMs, for a total of 1GB RAM. The graphics solution is currently a Radeon 9200SE AGP, an old card that was simply lying around.

The processors arrived with large aluminum heatsinks but no fans; presumably they were designed for a slimline case with sufficient airflow provided by a chassis fan. The heatsinks alone proved entirely inadequate, and were therefore jury-rigged with fans liberated from Socket 370 heatsink/fan coolers. This proved more than satisfactory and the processors don’t quite reach 35°C under heavy load.

The system has been running very stable so far (including a successful run of memtest86+). It is surprisingly pleasant to use when running Windows XP SP3; obviously it’s beyond oversized for DOS and more than adequate for OS/2.

The “new” system compares rather favorably to the old one; a Coppermine 850MHz Pentium III is roughly twice as fast as a 533MHz Mendocino Celeron. Increasing the FSB speed from 66MHz to 100MHz also provides a major performance boost. This isn’t noticeable under DOS, but is very much felt under Windows XP.

It would be wonderful to find two 1GHz/100MHz FSB Slot 1 Pentium IIIs, S-spec SL4KL or SL4BR. These are the fastest CPUs that the P6DBE board supports natively. Sadly, these processors appear to be quite hard to find.

The P2B-DS board, being far more tweakable, may one day end up with Tualatin Pentium III-S processors, but that’s a different project. The hard part is finding slockets which support SMP.

For now, the task is to verify that both boards really work flawlessly with various hardware and install a few random operating systems.