OS/2 Warp 4 was released in September 1996. Its codename was Merlin, perhaps because the Star Trek themed ‘Warp’ was now part of the official product name. This was not a particularly happy time for OS/2. Late 1995 saw the OS/2 for PowerPC debacle, shortly followed by the cancellation of the entire PowerPC-based Power Series line of computers. By the time Warp 4 was released, the IBM management had already decided to “de-emphasize” OS/2. IBM saw that they could not compete with Windows 95, not in a world controlled by Microsoft.

The disastrous failure of OS/2 for PowerPC spelled the end of the PSP (Personal Systems Products) division in Boca Raton, Florida. After the consumer-oriented push in the Warp 3 era, IBM now decided to focus on their core market again, corporate customers. Warp 4 was released at a time when the Internet was a major force and there was much talk of nebulous “network computing”.

OS/2 Warp 4 was something of an unplanned child. In 1994 and 1995, the development focus was on OS/2 for PowerPC.  When that fizzled, the soon-to-be-obsolete Intel version was suddenly the only game in town. In 1996, IBM grafted some of the technologies developed for OS/2 for PowerPC onto the Intel version (GRADD display drivers, internationalization support) and threw in a few freebies. The user interface got a significant facelift, but the kernel was essentially unchanged since Warp.

With Merlin, the product line became simpler than ever: There was just one package, delivered on a CD-ROM and three 3½″ boot floppies (the CD wasn’t bootable). It was the equivalent of Warp Connect “blue spine” (DOS and Windows 3.x support included) and the package was likewise blue. The downside was that only the most expensive OS version was now available.

This time, OS/2 was installed in a VirtualBox virtual machine (VM) for testing purposes; that made it easy to take screenshots of the installation process. The VM had 96 MB RAM assigned and used a 2 GB IDE disk. The disk size was chosen to work with the original Warp 4 disk drivers; to support larger disks, the installation floppies would need to be updated. This was the first screen greeting the user (reading the entire first floppy took about one second in a VM):

The installer was not very different from Warp Connect, and included the network configuration. There were lots of options to choose and it was a far cry from modern one-click OS installers. 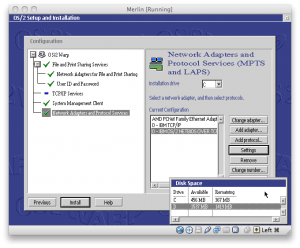 The network configuration was not entirely straightforward. OS/2 defaulted to the NETBIOS protocol for file sharing, but to be usable on modern networks (Windows 2000 and later, SAMBA), the NETBIOS over TCP/IP must be used. Unfortunately the installer for some odd reason didn’t allow DHCP configuration for TCP/IP at the same time. Either the NETBIOS for TCP/IP protocol must be added after the initial installation (not entirely straightforward), or TCP/IP must be installed with a dummy static address and DHCP enabled later (easier).

Overall, the installer made it all too obvious that numerous previously standalone product were bundled together. Once OS/2 Warp 4 was fully installed, the desktop looked like this: 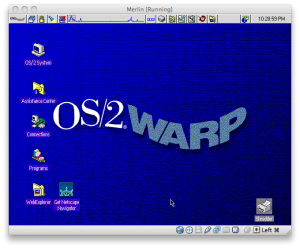 Visually. the desktop was unmistakable with the blue background bitmap. It was also significantly different from Warp 3: The icons had a new isometric “3D” look and the LaunchPad was gone, replaced by WarpCenter. Warp 4 also used a new, more legible and compact system font, called WarpSans.

The OS/2 desktop looked surprisingly well in 16-color VGA, but the resolution was clearly unsatisfactory for a 1996 system. As mentioned earlier, Warp 4 supported the GRADD display driver model, and also shipped with the GENGRADD generic VESA-based driver. Unfortunately the initial GRADD release was quite buggy; the later IBM GRADD driver packages in fact required Warp 4 with Fixpack 5 applied and wouldn’t install on the initial release.

Fixpack 9 was installed on the test system, shortly followed by GRADD build 083. Now the desktop looked like this: 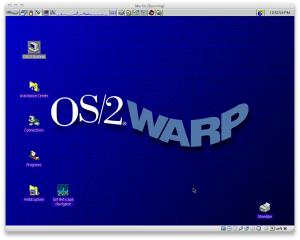 There wasn’t any single feature in Warp 4 that could be called the big thing, but there were several important new features, a collection of numerous mid-size things rather than a single big one.

One of the more immediately visible features was called WarpGuide. It was an optional user interface enhancement which guided users through settings dialogs, intended primarily for users unfamiliar with OS/2. WarpGuide displayed a floating window which essentially turned an ordinary properties dialog into a wizard, breaking down the settings into a sequence of simple step. The screenshot also shows the colored tabs for notebook style dialogs, one of the more noticeable user interface enhancements in Warp 4: 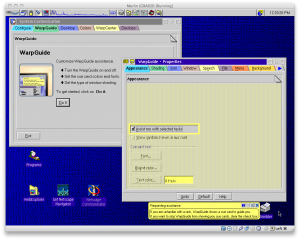 Another new feature which enhanced the user interface, but also offered entirely new functionality, was VoiceType—dictation and voice control. IBM had previously marketed VoiceType as separate product for OS/2 (since 1993) and sold special DSP accelerator boards. By 1996, higher-end desktop computers were powerful enough to handle voice recognition entirely in software. OS/2 Warp 4 was the first operating system to offer built-in voice recognition. VoiceType was still an early product of its kind; it required “training” to learn a particular person’s speech patterns and users had to pronounce each word separately. Even with these limitations, VoiceType was usable, especially for users who for any reason needed to operate a computer hands-free. 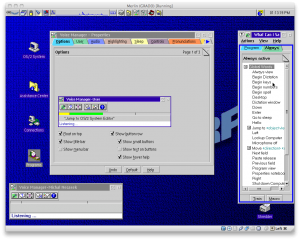 A web browser wasn’t anything new in OS/2, after all IBM’s WebExplorer had been shipped with the original OS/2 Warp in 1994. Unfortunately by 1996 WebExplorer was showing its age and was unable to process an increasing percentage of websites on the Internet.  IBM was collaborating with Netscape on an OS/2 port of Navigator, the most popular browser of the time. Navigator for OS/2 was not ready by the time Warp 4 was released, which is why the OS only shipped with a “Get Netscape Navigator” icon on the desktop. However, beta versions were publicly available, such as Beta 1a in September 1996:

For browsing the Web 2.0, Navigator 2.02 is nearly as useless as WebExplorer, but the Web was a very different place in 1996-1997. In the late 1990s, IBM followed the release of Navigator 2.02 with Netscape Communicator 4.04 and later 4.61. The browser was delivered as a free download to existing OS/2 users.

OS/2 users had something of a love-hate relationship with the Netscape browsers. For accessing the web from OS/2, Netscape was more or less the only game in town. Unfortunately, the OS/2 port was plagued by stability problems. It wasn’t just that Netscape crashed, that happened on all platforms. The OS/2 port was worse in that it often seized up in such a way that the process could not be killed and the system had to be restarted. This mis-feature was possibly related to the way Netscape was using the Win32 porting layer shipped with OS/2.

Somewhat related to web browsing was another new feature, Java. In another industry first, OS/2 Warp 4 shipped with IBM’s implementation of the Sun Java 1.0.1 JDK. OS/2 included not only the Java runtime but also the compiler, documentation, and sample programs. 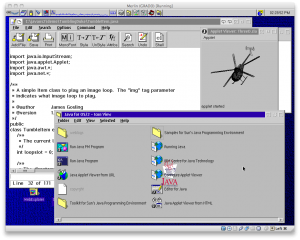 Java was a strategically important technology for IBM. The “write once, run anywhere” mantra was appealing to a company with a large portfolio of incompatible platforms. On OS/2, Java had two purposes, sometimes difficult to distinguish from one another. Supporting Java made OS/2 a better system, providing the ability to tap into the increasingly popular Java “platform”. At the same time, IBM was encouraging corporate customers to convert their existing applications to Java, which would make it easier for them to move off of OS/2 and to a different platform. That strategy met with a limited success, not least because in the late 1990s Java wasn’t a sufficiently mature environment.

The last (and least important) new feature was OpenDoc, a component-based document framework, a product of the ill-fated Taligent alliance. OpenDoc was primarily developed by Apple and was meant to be an anti-MS Office technology, a cross-platform version of Microsoft’s OLE. It is unclear why IBM even included OpenDoc in Warp 4; it was memory hungry, unstable, and almost completely useless. The OpenDoc components shipped with OS/2 were hardly more than a technology demo. OpenDoc was canceled several months after the Warp 4 release and never made a real impact on the world of OS/2, or indeed the world in general.

The War Is Over

The world of OS/2 was a bit strange in 1996. IBM effectively conceded the war for the PC desktop, but due to inertia, Warp 4 was a nice little OS. Technically OS/2 was somewhere between Windows 95 and Windows NT—with good legacy support and a fair chunk of legacy code like Windows 95, but also a fully protected operating system like NT; good networking capabilities and an advanced filesystem like Windows NT, but at the same resource requirements closer to those of Windows 95.

One of the more obvious signs that IBM had no long-term plans for OS/2 was the fact that the OS/2 API was largely frozen at the Warp 4 level. IBM continued enhancing the Open32 portability layer (not least for Netscape) and kept delivering Java updates. Later on, even several OS level GUI configuration were even delivered as Java applications, a technically questionable but politically understandable strategy. However, the OS/2 API was “done”, and deficiencies such as the archaic single input queue (SIQ) were never properly addressed.

IBM was very clearly pushing for Java and web-based applications, a company-wide policy by no means specific to the OS/2 division. Network computing was the buzzword of the day. IBM had some success with Workspace on Demand (WSOD), essentially a version of Warp 4 modified for easy manageability and network deployment.