The CD-ROM releases of OS/2 2.1 were unusual in that there was a single “EMEA” CD which included 13 NLVs, but a box with French or German or UK OS/2 2.1 only contained bootable installation floppies for that one language version. A Russian version of OS/2 was packaged separately.

The so-called EMEA CD was very minimalist, with the CD jacket only showing the OS/2 logo and the text “OS/2 2.1”. The CD itself was not much more verbose. 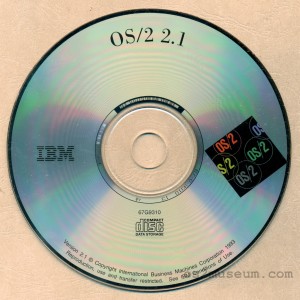 On the other hand, the installation diskettes were labeled in the appropriate language, as was the packaging. Printed documentation was likewise translated.

The “EMEA” CD didn’t quite cover Europe, the Middle East, and Africa. It included UK English, German, French, Italian, Spanish, Dutch, Portuguese, Danish, Swedish, Norwegian, Finnish, Canadian French, and Brazilian Portuguese versions. As mentioned above, the box only contained boot floppies for one language, but it was possible to manually create installation floppies for any of the provided NLVs from the CD as all the necessary files were included on the CD.

The UK version of OS/2 2.1 was almost indistinguishable from the US release. The documentation used US English spelling, for example. Essentially the only difference was a different default keyboard layout and country setting. 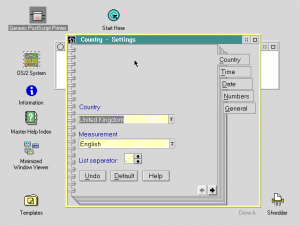 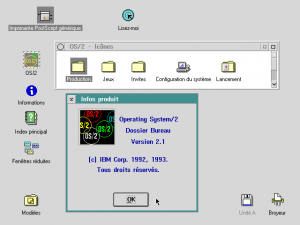 There were fairly significant differences between the DBCS versions of OS/2. This pertained especially to input method editors (IMEs), Win-OS/2, and DOS support. 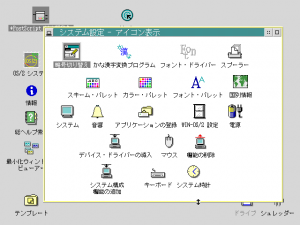 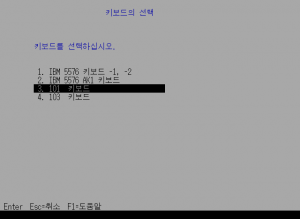 Installing DBCS OS/2 was usually not entirely straightforward for a person not familiar with Japanese, Chinese or Korean, but it was greatly facilitated by the fact that IBM used the same key combinations as the US version of OS/2 in the installation screens and dialogs. This was taken to an extreme in the shutdown screen: 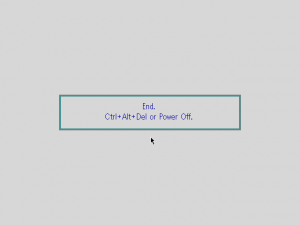 The DBCS versions of OS/2 were significantly more complex when it came to DOS and Win-OS/2 support, and somewhat inconsistent. 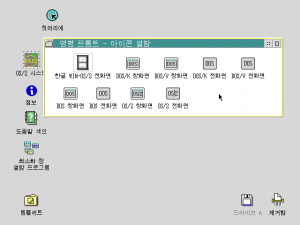 For example the Korean version of OS/2 2.1 came with three different DOS prompts: DOS, DOS/K, DOS/V. DOS was basically the US English version of OS/2 DOS support. DOS/K supported both the Korean and US codepage, while DOS/V only used DBCS codepages. Both DOS/K and DOS/V were localized into Korean.

All DBCS versions of OS/2 came with the appropriate DOS/V support. Note that a full-screen DOS/V session used graphics mode (in order to display complex ideographs), not text mode. 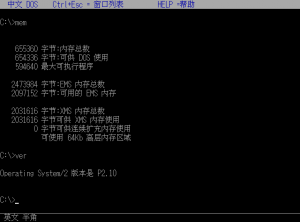 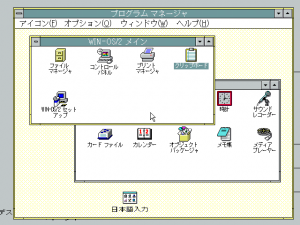 Some later OS/2 versions even shipped with multiple Win-OS/2 versions (e.g. Japanese and US), likely because some software designed for the US market wasn’t fully compatible with Japanese Windows 3.x. 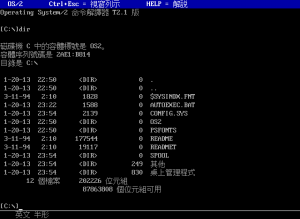 For this and other reasons, DBCS versions of OS/2  required somewhat modified display drivers (both full-screen and Presentation Manager). That of course complicated the lives of DBCS OS/2 users. It may be worth noting that the graphical text mode support was initialized almost immediately when booting OS/2:

Support of Other Countries

OS/2 2.1 was localized into a relatively small set of languages, but supported a much wider set of languages and countries with the appropriate country, codepage, and keyboard settings. Such indirectly supported languages included Turkish, Polish, Czech, Hungarian, or Icelandic.

The OS/2 Museum is looking for the remaining NLVs of OS/2 2.1: Russian, Hebrew, Thai, and Arabic.

This entry was posted in IBM, OS/2. Bookmark the permalink.