The Golden Years—the most successful version of OS/2

In October 1994 IBM released OS/2 Warp, the most popular version of OS/2 and arguably one of the coolest operating systems ever (Warp Connect even said so on the box—“The totally cool way to run and network your computer”—so it must be true). It was so good that some people used it for many years after the release. Its underpinnings weren’t all that different from OS/2 version 2.11 but it was a great leap forward in terms of usability.

OS/2 Warp was also IBM’s most serious and best attempt at gaining dominance on the PC desktop, or at least winning a significant market share. At one point and in some countries, OS/2 Warp may have accounted for 5% of the desktop market or more, but it is extremely difficult if not impossible to get reliable figures. OS/2 certainly had a significant foothold in the banking and insurance industries, both traditional IBM customers.

Similarly to OS/2 2.1, there were two versions of OS/2 Warp available: basic Warp without Win-OS/2 called “Red Spine” because of the appearance of the box (labeled “Enhances your existing DOS and Windows”). This version was prevalent because most people already owned Windows 3.1, whether they wanted to or not. And of course Red Spine was cheaper too. The other version was Warp with Win-OS/2 called “Blue Spine” (the box said “Includes DOS and Windows application support”). Both these versions were avaliable on floppies or CD-ROMs. By this time the floppy versions were fairly rare, especially because it was possible to create floppies from the CDs; it could make sense to buy the CD version even for people who couldn’t directly install from CD (or not yet). 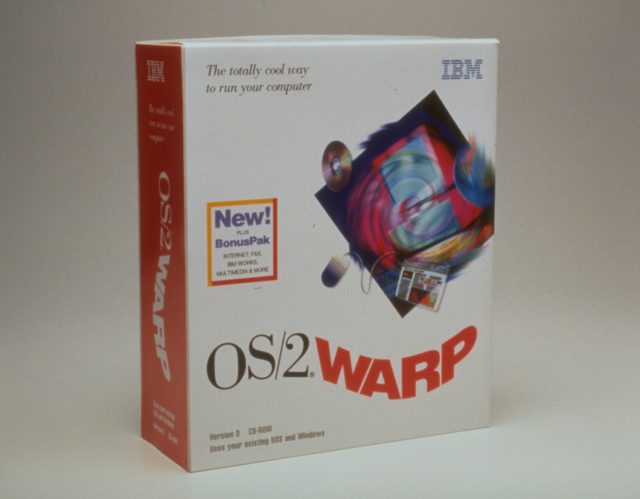 In mid-1995 the Warp family got two new members with the introduction of Warp Connect (again in Red and Blue Spine versions), extending the choice to whopping four possible versions, not counting different distribution media.

OS/2 Warp had several things going for it (in no particular order):

Naturally OS/2 Warp suffered from a few weaknesses as well (again in no particular order).

And now let’s take a closer look at the improvements over the previous versions of OS/2. First the technical differences:

There were numerous usability enhancements as well:

Here’s what OS/2 Warp looked like right after installation:

Cleaner and nicer than OS/2 2.11 wich one brand new feature—the LaunchPad at the bottom of the Desktop. The LaunchPad was a neat feature and demonstrated the power of the WPS with full drag-and-drop support.

I installed OS/2 Warp without Win-OS/2 (Red Spine), the more popular version. It came in a nice glossy cardboard box and contained two 3½” HD floppies and two CDs (obviously this was the CD-ROM version). One CD contained the operating system, drivers and sample multimedia files (sounds and movies). The other CD held the Bonus Pak, a set of applications and tools of which the two most important ones were IBM Works and IBM Internet Connection for OS/2. Also in the box was a nice User’s Guide and a directory of OS/2 ISVs and consultants.

Installing OS/2 Warp on a test system (a Pentium III-600 with 256MB RAM and a 32MB Matrox G400) was straightforward after building updated boot floppies with the latest IDE and floppy drivers. Installing from a CD didn’t even take long. Once the basic OS was set up, drivers for the Matrox graphics card were installed and the system was ready for use.

The biggest new thing in OS/2 Warp was of course the Internet. OS/2 suported the Internet long before Microsoft even realized its importance. This time the catchphrase on the box read “Your on-ramp to the information superhighway”.

The “superhighway” stuff was contained on the second CD, the BonusPak disk. Next to FaxWorks, VideoIn or IBM Works there was IBM Internet Connection for OS/2. It was aimed purely at dial-up users and contained an IBM dialer plus “Dial Other Internet Providers” (DOIP) dialer, at that time only supporting SLIP and not the newer and later prevalent PPP.

Basic Internet client software was also supplied—FTP, Telnet, e-mail, news, WWW (very rudimentary at that time). Plus support for some protocols that are completely extinct nowadays, such as Gopher.

The IBM Internet Connection was a very scaled down version of IBM’s TCP/IP kit which had been available since OS/2 1.3 days. 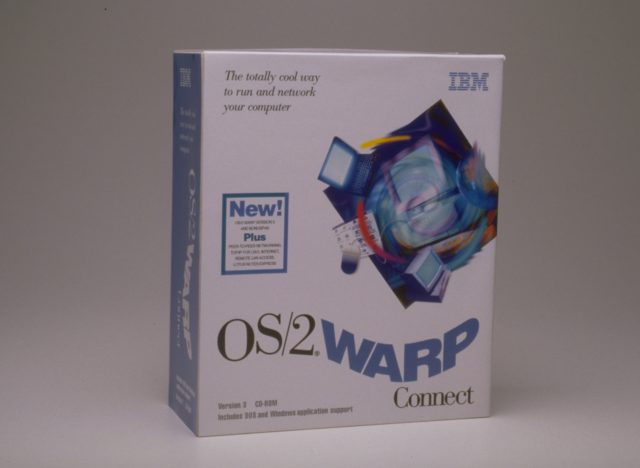 This merging of several previously standalone products made things a little confusing, especially for newcomers. For basic networking support there was MPTS (Multi-Protocol Transport Services) which was required by all the other products. The IBM LAN Requester had not changed much since OS/2 1.x days, still supporting the familiar NET command. IBM Peer was a very scaled down version of the LAN Server without most administration tools. Perhaps the most interesting of the pack was the TCP/IP support. Again it was a somewhat scaled-down version of IBM’s TCP/IP kit without NFS support, X server and similar esoteric software. What it did include however was full support for TCP/IP transport protocols and a number of client applications: FTP, Telnet, Gopher, e-mail, news (NNTP) and WWW—much like the IBM Internet Connection in plain OS/2 Warp.

This is what Warp Connect looked like after installation (with IBM Peer and TCP/IP installed):

There are quite a few more folders than in plain Warp and there could be even more if all options had been installed. This is what WebExplorer, one of the early web browsers, looked like:

Even this old WebExplorer 1.01 can still render some of the web’s most interesting pages.

The first application examined is the oldest and perhaps best known: ColorWorks from SPG, proudly called by its authors “The Artist’s Ultimate Power Program”. The first version of ColorWorks was released in 1995 and was later followed by versions 1+ and 2. It wasn’t exactly cheap (the box sported a $329.99 price tag) but also not more expensive than other similar programs (e.g. Adobe Photoshop).

For the most part ColorWorks was similar to other image manipulation apps but it had at least two unusual and probably unique (at the time) features: DIMIC and SMP Smart Threading. DIMIC stood for Dynamic In-Memory Image Compression and it referred to a technique ColorWorks could use to store the images compressed in RAM at the expense of processing speed. This allowed ColorWorks users to edit much larger images than they’d normally be able to. SMP Smart Threading was nothing other than multithreading support. ColorWorks could split its workload into several threads which would run concurrently. While this had no real effect on single processor machines, it could significantly speed up processing on SMP machines (at that time those would be running OS/2 2.11 SMP):

While SPG promised linear increases in performance up to 64 CPUs which is technically impossible (due to memory bandwidth bottlenecks), it is very likely that on 2-4 way SMP machines the performance increase was quite impressive.

At any rate ColorWorks was a capable program, as evidenced by one of the sample images supplied with it:

ColorWorks had all you’d expect from such a program—drawing functions, color manipulation, filters, all the works.

The other graphics program was TrueSpectra Photo>Graphics. It is difficult to say what kind of program it was exactly—it was an interesting hybrid between a bitmap and vector oriented drawing program. Photo>Graphics worked in a unique way: its output is a bitmap but it is not stored as a bitmap, but rather as a collection of objects (which can be bitmaps), text and effects—more akin to a vector oriented app. This has two important benefits:

TrueSpectra Photo>Graphics looked like this—the screenshot is from an old beta from early 1996, the oldest easily obtainable version:

With Photo>Graphics it was easy to change the text and images or alter the result in any way the user desired. The output was turned into a single bitmap only when it was printed or exported to disk.

OS/2 in the Marketplace

OS/2 didn’t have it easy—outside or inside IBM. It is well documented that at the time of Windows 95 release, Microsoft was putting serious pressure on the IBM PC Company, refusing to sign the Windows 95 OEM license until the last moment and requesting much higher payments from IBM than from other OEMs.

There was also one internal IBM project that had great bearing on the future of OS/2: OS/2 for PowerPC. It was a somewhat nebulous project which kept changing directions during its lifetime. It is hard to tell what was at the beginning of this project, if there indeed was any clearly definable beginning at all. At some point in the early 1990’s IBM decided that it would be wonderful to have this cool Workplace OS. It was to be a microkernel-based, object oriented uber-OS running on a RISC platform (a very ominous collection of buzzwords). It was to be able to run several operating systems at the same time. Nobody can agree anymore on which OSes exactly those were but it is certain that they included OS/2, Windows NT, MacOS and Solaris. Why anyone would want to run all these OSes on a single machine at the same time is something IBM never adequately explained and probably didn’t even think about hard enough. Obviously “because we can” was not a correct answer.

At any rate, IBM kept changing the goalposts and the project ended up as OS/2 for PowerPC, officially called in the final stages OS/2 Warp Connect, PowerPC Edition. IBM was hyping this product quite heavily between 1993 and 1995. There were many articles written about it, and there were beta versions of the PowerPC SDK available. There were porting workshops going on and companies like Stardock or Sundial Systems ported their products to OS/2 for PowerPC (reportedly without much difficulty).

As the release date for OS/2 Warp Connect, PowerPC Edition neared, the hype subsided. And when OS/2 for PowerPC was supposed to be released, IBM was suddenly quiet. The product was stealthily released but almost impossible to get.

There were multiple reasons for the failure of the OS/2 for PowerPC project. Some were external to IBM, others were purely internal:

On the whole, OS/2 for PowerPC was a spectacular failure and had grave consequences for OS/2. The PSP division (Personal Systems Products) was seriously weakened and didn’t survive for long. Billions of dollars were spent and effectively wasted for the most part, even though several technologies developed for OS/2 for PowerPC later resurfaced in OS/2 Warp 4 and elsewhere. One can only wonder what would have happened if IBM had spent those billions on the Intel version of OS/2 instead.

There is one very important lesson to be learned from this debacle: don’t believe industry pundits. They can’t see into the future even though they like to pretend that the opposite is true. From late 1980’s until mid-1990’s the conventional wisdom was “CISC is dead, RISC is the future”. Well, they were right, but there was one fatal flaw. These pundits predicted that Intel x86-compatible CPUs as the most typical CISC processors were out and would be replaced by a new RISC based architecture, such as the PowerPC (or perhaps Alpha or MIPS). But the engineers at Intel and other x86 compatible CPU vendors (AMD, Cyrix) weren’t stupid. What they did was build CPUs with a RISC core and a x86-compatible front end. Thus they achieved what the pundits didn’t expect: RISC performance while retaining 100% backwards compatibility with CISC. And so OS/2 for PowerPC was doomed even if it hadn’t been plagued by all its other problems.