The 32-bit version 2.0 of OS/2 contained a hidden Easter egg with a flamingo, a boat, and development team credits. The Easter egg could be invoked by selecting the desktop (either the background or a folder) and pressing Ctrl+Alt+Shift+O. 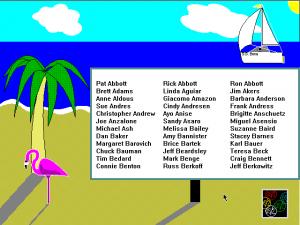 This undocumented key combination started \OS2\BITMAP\AAAAA.EXE, if present. The file \OS2\BITMAP\AAAAA.MET (a Presentation Manager metafile) contained the background image. The Easter egg was part of the desktop bitmaps package and wasn’t installed by default. The files had the hidden and system attribute set and therefore weren’t normally visible.

For whatever reason, the Easter egg was not shipped with OS/2 2.1, OS/2 2.11 or OS/2 for Windows, even though it was part of some OS/2 2.1 beta releases. In fact references to aaaaa.exe/aaaaa.met can be found in SYSINST2.EXE on distribution disk 1 in most, if not all, releases of OS/2 2.1. What’s more, the key combination to invoke the Easter egg was retained and supplying the two files would restore the functionality. Presumably on OS/2 2.0 systems where the Easter egg had been installed it would continue to be available after upgrading to OS/2 2.1.

It is unclear whether this was a deliberate decision or a packaging omission. Evidence (unchanged hotkey functionality, references in SYSINST2.EXE) points towards the latter.

In OS/2 Warp, the Easter egg was back, essentially unchanged but additionally displayed the message “The OS/2 Team dedicates this release to Darren Miclette”. What was that about? 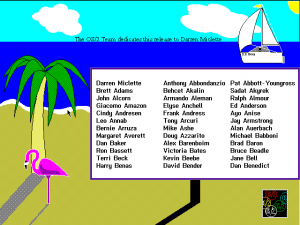 Darren Miclette was a member of the OS/2 development team in Boca Raton, Florida. Among other things, he was the inventor of US Patent 5671417, “Method and system for inserting floating code hooks into multiple versions of code”. This was a technique for flexible code patching where the code to be patched did not have to exactly correspond to a single expected image. Instead, the patching code would search for specific patterns and would find the correct locations even if the code to be patched was recompiled with minor modifications.

What the above technique did was enable IBM to release OS/2 for Windows, code name Ferengi. OS/2 for Windows would “absorb” an existing Windows 3.1 setup, rather than shipping its own Win-OS/2 code. The upshot was that IBM did not have to pay Microsoft royalties for Win-OS/2. At the time, Microsoft was very successful in forcing OEMs to preload Windows 3.1, hence most owners of new PCs already possessed a Windows 3.1 license anyway. The same technique was later used in “blue spine” (with Win-OS/2) and “red spine” (without) OS/2 Warp and OS/2 Warp Connect.

Darren Mark Miclette died on September 25, 1994 at the age of 29; OS/2 Warp was released in October 1994 with the hidden tribute to Darren. The same Easter egg was also shipped with OS/2 Warp Server, including the Advanced SMP release.

In OS/2 Warp, the Easter egg files (\OS2\BITMAP\AAAAA.EXE and .MET) were no longer hidden and a curious user had a fair chance of stumbling upon them.

In OS/2 Warp 4, the Easter egg screen changed somewhat. The flamingo, palm tree, and a boat called S.S. Boca were no longer appropriate as the OS/2 development team had moved from Boca Raton, Florida to Austin, Texas. The Easter egg now showed a green plain at sunset, with mountains in the background. It would be difficult to say that the Easter egg had a high artistic value. 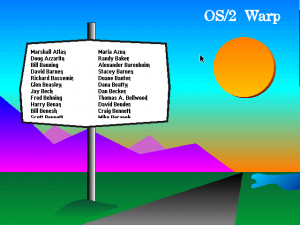 The Warp 4 style Easter egg was still implemented as AAAAA.EXE and .MET in the \OS2\BITMAP directory and still invoked with Ctrl+Alt+Shift+O.

Note that on faster systems (possibly anything beyond a Pentium Pro or so), invoking the Easter egg via the Ctrl+Alt+Shift+O key combination is somewhat broken; the Easter egg comes up but immediately disappears again. Running AAAAA.EXE from \OS2\BITMAP produces the expected results.