Thanks to a kind reader, the OS/2 Museum obtained a file archive of the ThinkPad 701 recovery CD. The 701C/701CS was also known as Butterfly thanks to its unique folding keyboard. 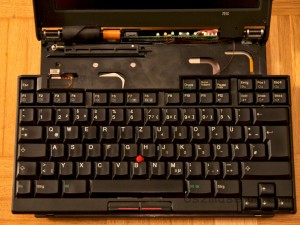 The recovery tool appears to have been designed for all ThinkPads and desktop PCs that IBM sold during the era (circa 1995). Since the recovery CD was, well, a CD, the software was able to either boot from a specially created floppy in the target system and directly use a built-in CD-ROM, or connect a CD-ROM-less target system (such as the ThinkPad 701) over a parallel (or even serial, if one had a lot of spare time) cable to a host system equipped with a CD-ROM.

Neither of these methods sounded particularly attractive. PCMCIA-attached CD-ROMs are rather exotic, and the files weren’t even on a CD anyway. A parallel cable would have been a possibility, but since the host system needed to run Windows 3.1 (and have a parallel port), this was rejected too. Oh, and the ThinkPad 701 needs a port expander or a special cable to even have a physical parallel port connector, since it is so small.

On the other hand, the ThinkPad 701 has two PCMCIA slots, and both PCMCIA to CF adapters as well as CF cards and microdrives are inexpensive and easy to find. Better yet, with a USB to CF adapter, it’s very convenient to transfer large chunks of data to/from a modern PC or a Mac. How hard would it be to restore the Butterfly using a CF card? Not too hard.

The recovery CD contains two distinct sets of files: a number of individual files in the ‘preload’ directory for performing the restore, and two largish ZIP archives in the ‘zip’ directory which contain files to be copied onto the target system. The two archives, named mobile1.zip (108MB) and mobile2.zip (160MB), are designed for the 50 MHz 486 DX2 and 75 MHz DX4 models, respectively. The former contains PC DOS 6.3, Windows 3.1, and preloaded applications. The latter additionally includes OS/2 Warp 3 in a dual-boot configuration.

Preparing the CF card is trivial. A 512 MB card is big enough to hold both of the recovery archives; in a real pinch a 128 MB card would be big enough to restore the smaller one. The CF card has to be formatted with a FAT16 filesystem and must contain the ‘zip’ directory copied from the recovery CD in its root directory.

The tricky part is the DOS boot floppy containing the recovery software. Fortunately, although IBM provided a tool to create the floppy with one of several predefined configurations (different CD-ROM models/docks or cable transfers), the software is transparent enough. Most of the controlling logic is in AUTOEXEC.BAT, which calls several custom utilities.

It’s possible to start either with one of the predefined floppies or from scratch by restoring the ‘preload\dosboot.dsk’ image (using the included LOADDSKF utility) and copying the required tools from the ‘preload’ directory.

What’s not directly included on the recovery CD is the PCMCIA ATA driver stack. It could be extracted from the ZIP archives, or from the pctpx130.exe package which any pcbbs mirror will have.

The rest is a matter of constructing a requisite CONFIG.SYS, editing AUTOEXEC.BAT (initially copied from one of the several existing alternatives), and copying all requested drivers and tools onto the floppy.

Once the preparation is complete, all that remains is to insert the PCMCIA/CF card, boot from the restore floppy, respond to the prompts, and finally sit back until the restore is done (it takes a while).

Note that by default, the restore process repartitions the disk, destroying any existing data in the process. If that is not desirable, it is possible to comment out the re_part step from AUTOEXEC.BAT. In that case, a sufficiently large primary partition must be provided. The formatting step can be skipped as well, in which case a FAT16-formatted C: drive with enough free space must exist.

The findzip utility is responsible for finding the recovery archive on an existing drive. The argument ‘1’ or ‘2’ determines whether mobile1.zip or mobile2.zip will be used.

Note that the updateea utility (which is run last) is crucial for preloads which include OS/2. The utility processes Extended Attributes (EAs) without which OS/2 will not function correctly.

For the DOS-challenged, an image of the adapted boot floppy is available here. It will completely wipe repartition the disk and restore the mobile2.zip archive (with OS/2 preloaded); if any of that is undesirable, AUTOEXEC.BAT needs to be edited as described above.

If everything went well, the ThinkPad will boot to something like this (the ThinkPad Advisor): Note that the restore archive for ThinkPads without OS/2 is somewhat older and contains a different ThinkPad presentation. As mentioned above, the better ThinkPad 701 models (with DX4 CPUs and 8MB RAM on board) were preloaded with both DOS 6.3/Windows 3.1 and OS/2 Warp. 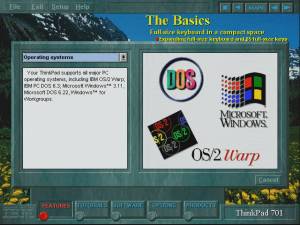 And as with many contemporary laptops, the ThinkPad 701 came with a bevy of preloaded software of questionable usefulness: 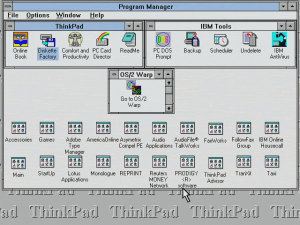 The “Go to OS/2 Warp” icon was prominently placed in the center of the screen. OS/2 was installed on the same FAT partition as a dual-boot system; OS/2 also used the same Windows 3.1 installation for its Win-OS/2 support. Windows 95 was not available as a preload option, but was a supported supported operating system on the ThinkPad 701.

As always, it’s nice to see a 20-year old system spring to life more or less as it had been originally shipped… give or take a few scratches and gouges here and there, and a dead battery.

This entry was posted in IBM, ThinkPad. Bookmark the permalink.