Would you believe that besides all the other Made in China fake brand-name items, there are also fake memory modules? Of course you would! At least Kingston and Samsung modules have been seen in the wild; the Kingston ones are depressingly common.

Two out of these four Kingston Value RAM modules are fake (click on the image for higher-res photo). Let’s call them A, B, C, D starting at the top. Can you figure out which ones are the fakes? 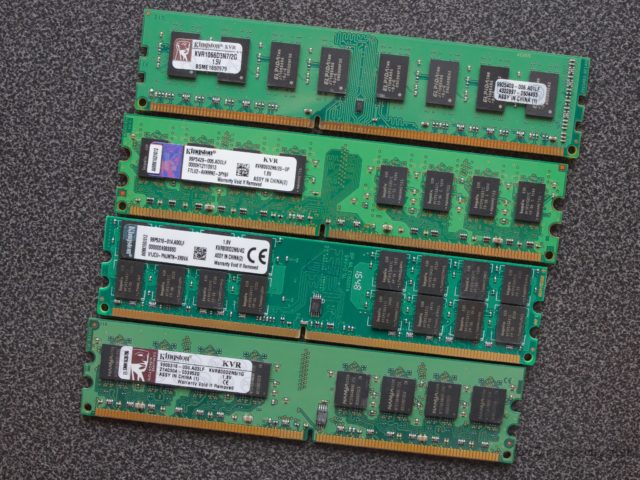 The two fakes have been purchased on Amazon within the last few weeks (the genuine ones are from the spare parts pile). It is unclear whether the sellers even realize they’re selling fake goods. Kingston provides some helpful information because they clearly have been fighting with counterfeit products for a while.This photo may provide a hint because it shows the new-style Kingston security image fairly well: 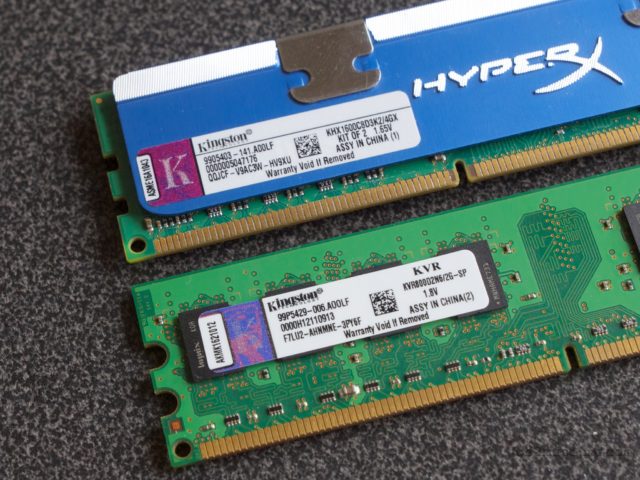 A fake and a genuine Kingston. Which is which?

One of the above modules is a genuine Kingston, one is not. The lower (green) module is module B from the first photo.

The fakes are relatively obvious if one has genuine modules to compare with. Unfortunately given Kingston’s protection technology, spotting the fakes from photos isn’t so easy—no wonder they sell so well (and that’s when the seller shows the actual product photo!).

Identifying the fakes from SPD information is, on the other hand, trivial. But not everyone knows how to do that and more importantly, you have the module in your hands (and your PC) first. It’s apparent that the fakers don’t bother faking the SPD data which makes a reliable determination of what’s genuine and what’s not reasonably easy.

For what it’s worth, I suspect modules with Kingston-labeled memory chips are not fakes. But Kingston also sells enough modules with chips from Hynix, Elpida, Nanya, and others that non-Kingston chips certainly don’t imply a non-Kingston module.

This entry was posted in DDR RAM, Fakes. Bookmark the permalink.

17 Responses to Spot the Fakes