So This Actually Works…

In a discussion on a previous post, Richard Wells suggested that an ATI VGA Wonder-16, a 16-bit ISA VGA card, should be able to operate in an 8-bit slot. I can confirm that yes, it does: 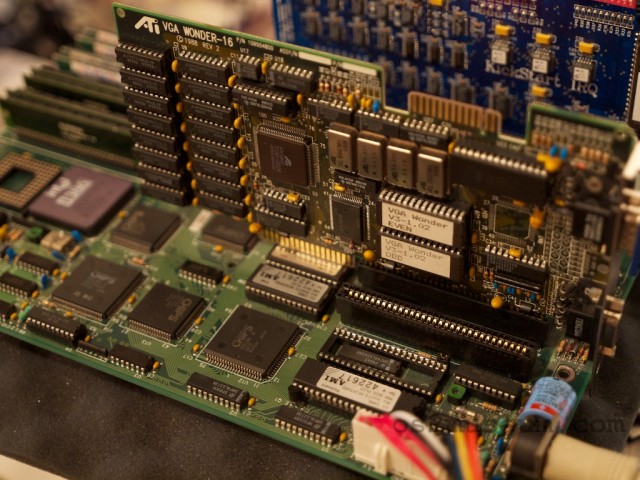 Note that the card does not require any reconfiguration, it detects that it’s running in an 8-bit slot and acts accordingly. A wonder indeed.

The card does have a selectable setting to choose whether its ROM should operate as 8-bit or 16-bit memory, but that only seems to affect operation in a 16-bit slot. The manual mentions that even in some 16-bit slots the ROM might be automatically switched to 8-bit mode. That hints the card automatically detects what kind of slot it’s in.

Note that on this particular board the card doesn’t sit in the 8-bit slot quite tight because the BIOS chips get in the way (there are two 8-bit slots, each with a ROM chip right next to it). It does not cause any short-term problems. There are also no worries about possible short circuits because the edge connector sits on top of the ceramic ROM package.

Richard is entirely correct that this is a highly versatile card. It can handle analog VGA monitors as well as older EGA/RGB/TTL color and monochrome monitors, it can emulate EGA/CGA/MDA well, and at the same time it’s a SVGA card with VESA support (via TSR) and everything.

The VGA Wonder-16 is not a terribly fast card but it’s not insanely slow either, and it would be unrealistic to expect blazing speeds from a card built in January 1989 or so. After all, this was ATI’s first graphics card with a 16-bit bus. ATI’s later models with the 28800 chip such as Wonder XL and Wonder XL24 should be similarly flexible and faster.

This entry was posted in ATi, PC hardware. Bookmark the permalink.

20 Responses to So This Actually Works…