The other day I attacked an old and long forgotten 286 PC stashed away in the basement. The PC is dead because the power supply blew years ago and the motherboard has a non-standard power connector.

But the case was packed with goodies like this one: 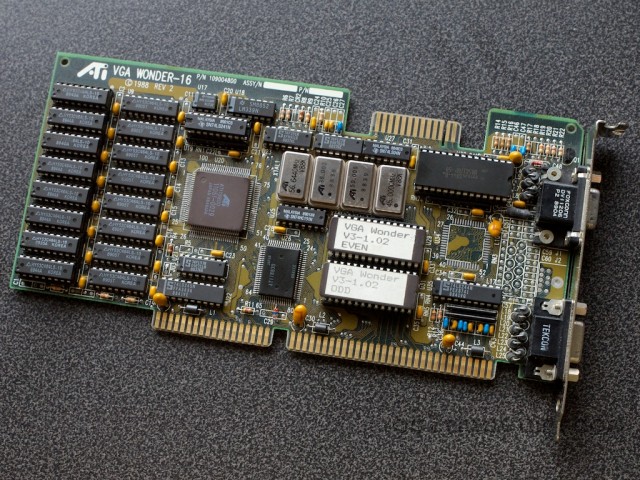 The card is obviously rather old and supports EGA monitors in addition to VGA. It can also be configured to emulate EGA/CGA/MDA hardware. Note the lack of jumpers—everything is software selectable with the configuration stored in EEPROM.

The 286 also had this installed:

The memory board is quite long and may easily not fit into some boards, but it’s easy to configure, even without a manual. The card takes 256KB or 1MB SIMMs, naturally in pairs. There’s even an image of the driver disk floating around—necessary for EMS, but for extended memory there’s no extra software required.

Needless to say, 8 MB is a lot for such a card. Many memory boards only support 2 or 4 MB and use DIP memory chips. The DFI MegaLITH on the other hand is an excellent way to park a few surplus 1 MB SIMMs.

What I left in the case was the 100-something MB ESDI hard disk and the corresponding WD-7000 controller. While technically highly interesting (ESDI was never all that common), a heavy 5¼” hard disk is somehow not quite as convenient as a CF card.

On the other hand I pulled the Epson SD-800 drive (manufactured in 1993) from the case. That’s a rather unusual combo 5¼”/3½” floppy drive which only occupies one 5¼” bay. It has the neat property that depending on where it’s attached to the floppy cable, either the 5¼” or the 3½” unit acts as the A: drive.

The 3½” drive looks like a fairly standard laptop drive. The 5¼” part is a slim drive, about 1″ tall. Both have eject buttons—standard for a 3½” unit but highly unusual arrangement for a 5¼” floppy drive.

This entry was posted in 286, ATi, PC hardware. Bookmark the permalink.