A while ago, a reader commented that in certain circles, it’s well known that there were “fake” OPL3 chips. This does not appear to be widespread knowledge. After a bit of digging, an interesting chapter in the history of PC hardware unfolds.

First let’s remember that the Yamaha OPL3 FM synthesizer, typically an YMF262 or an YMF289B, was an essential part of a Sound Blaster compatible sound card (let’s forget about exceptions like Ensoniq SoundScape and its bizarre OPL3 “emulation”). At the same time the Yamaha chips were somewhat expensive, and protected by a patent.

It is apparent that someone manufactured OPL3 copies, disguised them as nondescript chips, and sold them to many more or less reputable sound card OEMs. It is not clear what exactly these chips were. However, the sound they produce is normally close enough to real Yamaha chips that they were likely manufactured based on stolen “blueprints” of the originals. And the fact that companies like ESS, Crystal, OPTi, or Aureal couldn’t produce 100% accurate OPL3 clones strongly hints that there’s something fishy about these chips.

It is interesting to contrast these fake chips with the far better known instance: fake cache chips. To recap, in the mid-1990, disreputable companies sold motherboards with dummy pieces of plastic pretending to be cache chips. These chips had no actual function.

The fake OPL3 chips are the opposite. They are actual functional equivalents of Yamaha OPL3 chips (quite possibly exact copies), but pretend to be something else because they were not produced legally. This is not to be confused with the multitude of legally developed OPL3 clones. For the sake of clarity, let’s call the illicit fakes “copies” and the legal workalikes “clones”.

There is absolutely no documentation about the OPL3 copies. It’s not known how many there were, how much they sold for, or who produced them (but Made in Taiwan and/or Made in China is a near certainty). The fact that there is no hint who made them is itself highly suspicious. What’s left is evidence in the form of vintage sound cards using these chips.

Let’s take a look at a few of the known Yamaha OPL3 (or, in one case, Yamaha DAC) equivalents.

Let’s start with the LS5122, a functional equivalent of the Yamaha YAC512-M DAC. Strictly speaking, this might not be a copy, but the chip is very shady. There’s no hint who manufactured it or when, no datasheet, no nothing. It’s only obvious what it does—compare the following two close-ups: 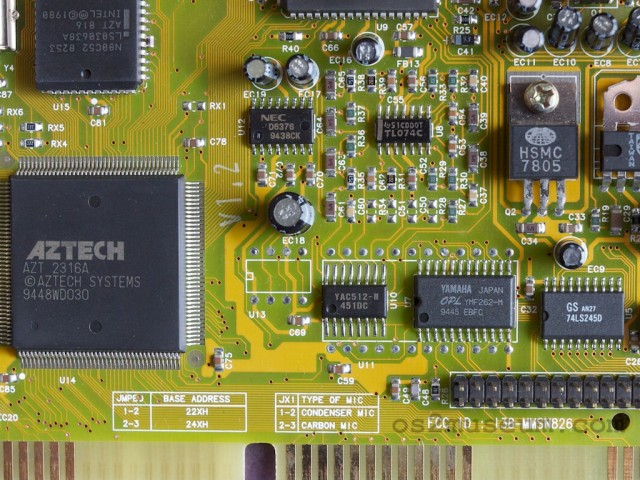 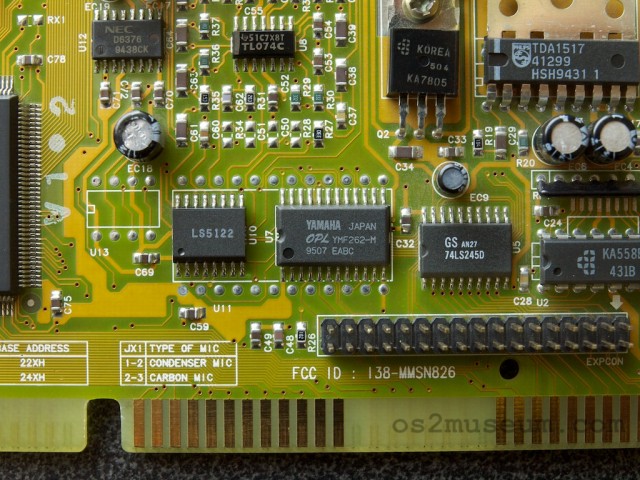 These are photos of two Aztech Waverider 32+ boards, exactly the same PCB and model, both manufactured within the first few weeks of 1995. Both sport a genuine Yamaha OPL3 chip, but while one has a Yamaha YAC512-M DAC next to the OPL3 chip, the other has a mystery LS5122 instead. LS512, YAC512… probably not a coincidence.

How do we know these are really copies? The OPTi 82C924 does not include an OPL3-compatible core, yet the board supports OPL3, so the chip has to be there somewhere. The LS-212/LS-215 pair is really the only suspect. 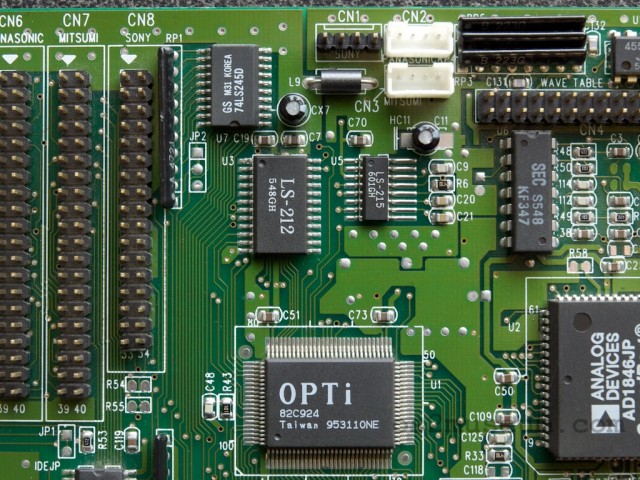 There’s even better evidence though. A leaflet provided with “Miss Melody” sound card (ESS688-based) shows a board schematic with YAC512 and YMF262 chips very clearly marked. The actual board sports LS-212 and LS-215 instead.

The chip names seem to be deliberately chosen to resemble very common components such as the LS245 bus transceivers or LS125 quad bus buffers. It is also plausible that there’s some connection between LS-215 and LS5122.

These chips have been seen on a mid-1995 ProComp Pro-Multimedia card next to an OPTi 82C929A controller. They appear to be straightforward copies of the YMF262-M and YAC512-M, respectively. 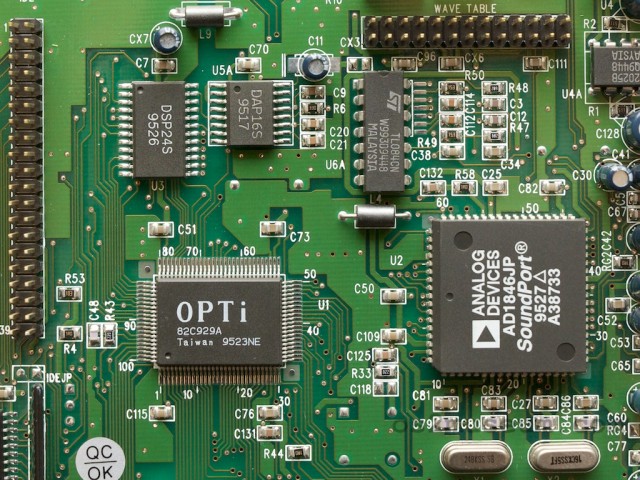 The excellent AmoRetro has a beautiful photo of a 1995 Shuttle HOT-233 where these copies can be seen as well, again next to an OPTi 82C929A controller.

FT6116 is a Force Technologies 2Kx8 CMOS SRAM. The FT6116-100 is… certainly not. Obviously a cheap Taiwanese sound card has no need for a SRAM chip. What’s more, the Avance Logic ALS100 does not include an OPL3 code (unlike its successor, the ALS100+), so an OPL3 chip has to be on the board somewhere. 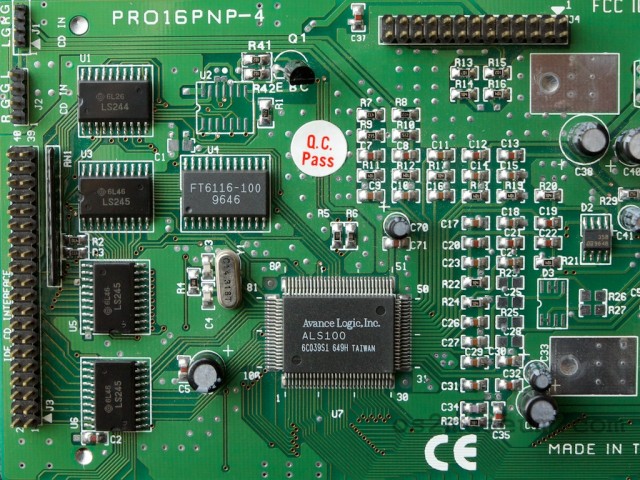 The FT6116 is clearly not what it claims to be, and it just happens to match the YMF262-M package. Probably not a coincidence.

Last on the list is the DXP44Q. This chip appears to be a pin-compatible copy of the Yamaha YMF289B, also known as OPL3-L. This was a low-power chip with power management suitable for portables (and found in the ThinkPad 701C for instance). 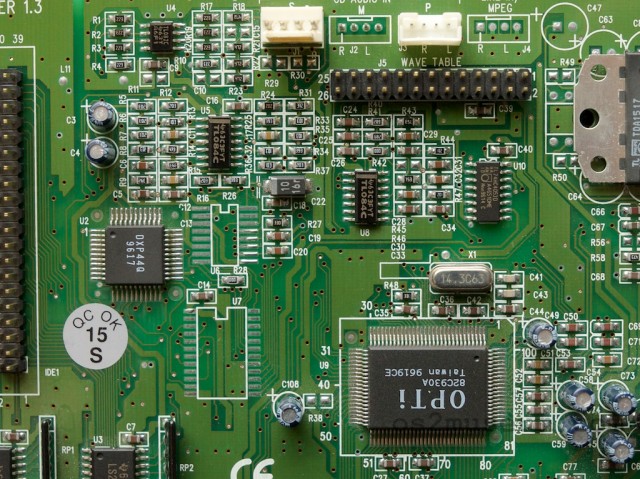 Once again, the OPTi 82C930A does not include an OPL3 core (unlike its successor, the 82C931). Once again, there has to be an OPL3 on the board somewhere, and the DXP44Q is more or less the only candidate. The 82C930A does include a DAC, which explains the lack of a separate DAC chip.

These mystery chips first appeared in 1994 or so, when Yamaha was still the only supplier of OPL3 chips and there was a large market for sound cards. They quietly disappeared again around 1997 when more or less all sound controller manufacturers (Crystal, ESS, OPTi, Avance Logic) integrated an OPL3 clone into the core chip.

Creative Labs does not appear to have ever used these chips (likely due to a licensing deal with Yamaha which allowed Creative to integrate an OPL3 core into its own chips), but Aztech and many others did. The fake OPL3 chips are most commonly, but by no means exclusively, found next to an OPTi controller. They have also been seen paired with ESS and Avance Logic controllers, and there’s no reason to think they couldn’t be used with others.

The affinity with OPTi controllers could be simply a function of the fact that OPTi had well established and cost-effective controllers available in 1995. ESS and Crystal went relatively quickly from zero to integrating an OPL3 workalike (ESS1688, CS4235), obviating the need for external chips.

It’s likely that there are other OPL3 copies out there. Perhaps readers have seen some? If in doubt, photos can be used to judge what’s a likely OPL3 copy and what’s not. It’s known which audio controllers include what FM synthesis capabilities, and if a card uses a FM-less controller yet plays OPL3 music, then an OPL3 chip has to be there somewhere. It’s usually not hard to spot.