Today I came across a random 1996 vintage ISA sound card (no name, made in China). The only two chips worth noting on the board are an OPTi 82C930A chip and a mysterious DXP44Q—a square chip center left, to the right of the CD-ROM connector. 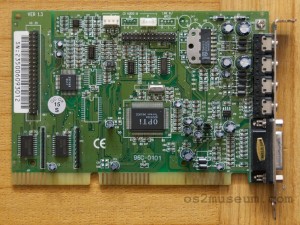 It’s clear enough what the OPTi chip does—it’s essentially a SB Pro + WSS clone with an integrated DAC/ADC and mixer. But what the heck is the DXP44Q chip? I had never come across it and I can’t find any documentation about it, not even who made the chip!

Unfortunately search results are completely poisoned because someone has DXP44Q on a list and now thousands of Chinese chip peddlers offer “DXP44Q” without having the slightest clue what it is or what it could possibly be good for.

There are a few photos of other sound cards with the same mysterious DXP44Q chip. Is it possible to at least determine what it does given the OPTi 82C930 datasheet? Let’s see…

The OPTi 82C930A chip (the 82C930A is presumably close enough that any differences are not significant) is highly integrated and implements most of the functionality of a typical Sound Blaster clone sound card. It includes bus controller circuitry (including DMA and interrupt logic), Sound Blaster and Windows Sound System register-compatible logic, a game port, a CD-ROM interface, a MPU-401 interface, and a codec/mixer. The only part conspicuously missing is a Yamaha OPL3 implementation (but the 82C930A is designed to communicate with an external chip).

Why would OPTi not integrate an OPL3 FM synthesizer when everything else is there? That’s easy—John M. Chowning’s U.S. Patent 4,018,121, initially assigned to the Stanford University and in 1982 reassigned to Yamaha Corporation (formerly known as Nippon Gakki Co., Ltd.). Because of this patent, others were prevented from implementing OPL3 clones.

The patent expired in 1995 (in some countries possibly in 1994). At that point, it became highly desirable to implement OPL3 clones, since Yamaha was charging relatively high amount of money for their chips. Perhaps that the DXP44Q is such a clone. The DXP44Q on my board is from early 1996 and thus wouldn’t violate the FM patent (not that that would be a proof either way).

With the OPTi 82C930 datasheet and a multimeter, it is easy to confirm that the 82C930 pins dedicated to communication with an external OPL3 chip are, in fact, connected to the DXP44Q.

It is thus fairly certain that the DXP44Q is a functional equivalent of an OPL3 chip and its associated DAC—a clone of an YMF262 plus a YAC512. To be fair, others at least suspected that the DXP44Q might be an alternative OPL3 implementation, as evidenced here.

What’s more, on the audio board’s PCB there are unpopulated locations (U6 and U7) that just happen to exactly match an YMF262-M and a YAC512-M (the SMD versions of those chips). It seems probable that the PCB was designed around 1995 and was intended to accommodate either the genuine Yamaha OPL3 or a third-party replacement (the likelihood that the DXP44Q chip was made by Yamaha is slim). 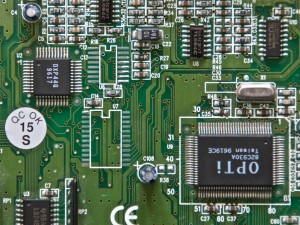 Case closed? Almost, except for one nagging question: Who the heck made this chip? And why is this chip not mentioned in any discussion of OPL3 clones? Any insights are welcome.