A recent inventory at the OS/2 Museum revealed that two seemingly identical sets of Microsoft OS/2 1.30.1 disk images were in fact not identical at all. Probably thanks to the twilight status of OS/2 at Microsoft in the days of OS/2 1.3, Microsoft managed to confuse things to the point that it had to issue KB article Q99245 explaining the differences. 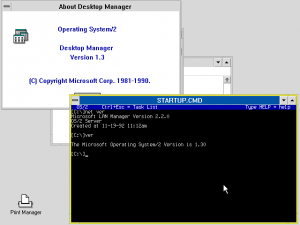 The trouble was that all the versions reported themselves as 1.3/1.30.1, and the SYSLEVEL.OS2 file which is supposed to differentiate between minor patch versions was exactly identical in all cases. However, timestamps and sizes of many system files (including the kernel, OS2KRNL) were not identical.

As the above mentioned KB article indirectly hints, the most differences between the releases were in the LADDR (Layered Adapter Device DRiver) subsystem of OS/2. LADDR was a technology developed by Microsoft in the days of OS/2 1.2 in order to better support the multitude of new storage controllers.

Starting around 1990, Microsoft lost interest in OS/2 as a desktop operating system (that was now DOS + Windows 3.0). But OS/2 still played a very important role at Microsoft as the basis of LAN Manager and SQL Server, Microsoft’s flagship server products.

While LAN Manager 1.x was sold as an OEM product, LAN Manager 2.0 was distributed almost exclusively directly through Microsoft. And that meant MS OS/2 needed to support common OEM hardware.

For a server OS, graphics was not an issue, but storage most certainly was. To ease supporting varied hardware and add new feature (such as fault tolerance), Microsoft developed the layered storage driver model known as LADDR. Instead of a monolithic DISK01.SYS driver, the drivers were broken down into smaller, more manageable chunks.

On a typical AT clone, ESDI-506.BID was the low-level IDE driver, DISK.TSD was a generic fixed disk driver, while FATCACHE.VSD or FT.VSD (FT stood for Fault Tolerance) were add-on modules. IOS1X.SYS, IOCFG01.SYS and IORUN.SYS were core LADDR components, shared among hardware implementations.

The architecture looked more like that of Windows NT than OS/2 1.x. Among other things, LADDR introduced SRBs (SCSI Request Blocks) and OS/2 1.3 with LADDR supported SCSI tape drives (important for tape back-up on servers) and CD-ROMs.

Available information indicates that Microsoft never released OS/2 1.3 as a standalone product and probably also never shipped it to any OEMs. Microsoft did ship OS/2 1.3 as part of LAN Manager, and even published KB articles identifying the delivered files together with their sizes and timestamps.

The following KB articles were extracted from an old MSDN Library CD, since they are either very difficult to find or incomplete on-line. There are the following articles listing LAN Manager installation disk contents:

The Q1113604 KB article mentions that among others, OS2KRNL was updated in LAN Manager 2.2b. Unfortunately no file sizes or timestamps were provided, so spotting the LAN Man 2.2b version of OS2KRNL could be tricky.

To summarize, there were at least four different versions of OS/2 1.3 released by Microsoft. While they are not easily distinguished, their existence was clearly documented by Microsoft.

This entry was posted in Microsoft, OS/2. Bookmark the permalink.