Have You Seen This Board?

The OS/2 Museum recently acquired this mystery 386 board (click on the image to see a high-resolution photo): 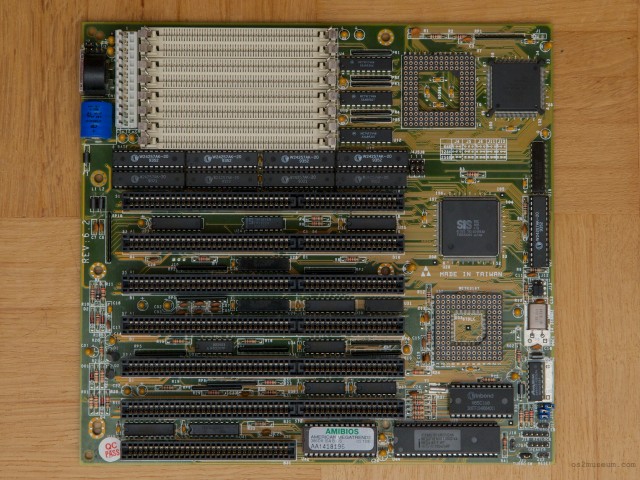 This is in theory a killer 386 board: onboard Am386DX-40, a socket for a replacement 386 or 486DLC processor, a FPU socket, 256KB cache, 8 SIMM slots for up to 32MB RAM, six 16-bit ISA slots, and best of all, a clock chip that can be set via jumpers to 16/20/25/33/40/50 MHz. Anyone familiar with typical 386 systems knows that such boards with user-selectable clock frequency are rather uncommon. Changing the clock speed normally involves replacing the crystal, which is hardly something one would want to do regularly.

So where’s the catch? So far I have been unable to get a Cyrix or Texas Instruments 486DLC processor working in the board. Both processors work in a different board (older, without proper 486DLC support) but when inserted in this one, the system does not boot up at all and shows no signs of life.

When another Am386DX is plugged into the CPU socket, the system works and both processors get warm. It’s unclear which one is actually used (or possibly both?).

Near the soldered-on PQFP CPU, jumper J1 location is marked, but the jumper is not installed. Without a manual, it is unclear whether the board really supports a socketed CPU, and if so, whether any jumpers need to be set. The function of J1 is not obvious.

My attempts to identify the board via TH99 have not been successful. The board is Made in Taiwan and there may be a manufacturer’s logo (three triangles). There is no obvious model designation but on the bottom side, the string “386IS-B-6-2” is etched. On the component side, a large “REV : 6.2” marking is visible. The PCB was manufactured in week 8 of 1993.

The chipset is an SiS 85C460; this chipset was mostly used in 486 boards but no details (let alone datasheets) are available. The FPU socket has space for a soldered-on 87DLC math chip, but none is present. However, plugging in a 387 FPU does work.

The board has a socket where a Dallas RTC probably could be installed. Instead, a Winbond W85C168 RTC is plugged in, in conjunction with a dreaded rechargeable NiCd barrel battery near the keyboard connector.

If anyone has information about what this board is, or even better, how to get a Cyrix or TI 486DLC processor going in it, please leave a comment.

This entry was posted in 386. Bookmark the permalink.

23 Responses to Have You Seen This Board?