In the mid-1990s, IBM and Motorola unsuccessfully tried to create a new personal computer platform built around PowerPC RISC processors. Apple was initially a member of the alliance called AIM (Apple/IBM/Motorola) and used PowerPC processors in its own Macintosh systems for over 10 years. 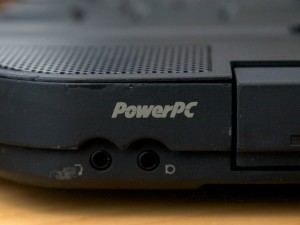 IBM’s line of machines was called Personal Power Series (PPS) and included several desktop models as well as portables sold under the ThinkPad brand. There was a very close link between the PPS machines and specific RS/6000 models. 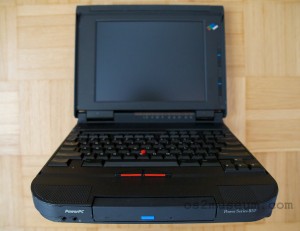 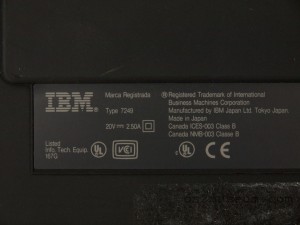 At the same time, the desktop Power Series 830/850 models were withdrawn, with RS/6000 machines listed as replacements. There was no longer any mention of OS/2 either, but AIX, Windows NT, and Solaris were offered as ThinkPad Power Series operating systems.

On October 8, 1996, the withdrawal of the ThinkPad Power Series systems was announced, less than 18 months since the initial product announcement. The systems were replaced by the RS/6000 Notebook 860 (designated 7249-860), which was essentially a ThinkPad 850 with faster 166MHz 603e CPU, a larger 1024×768 display, and an upgraded graphics chip (S3 Aurora64+ instead of WD90C24). The 860 no longer used the Power Series or ThinkPad branding. 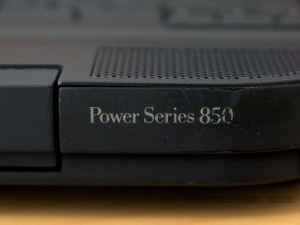 The ThinkPad Power Series systems were clearly not successful. However, this was not necessarily due to any deficiency in the machines themselves. The entire PowerPC initiative fizzled and even if the PowerPC ThinkPads were brilliantly designed, solidly built, and cheaply sold (the latter certainly wasn’t the case), there wasn’t any real market for them. However, that does not makes these systems any less interesting.

The ThinkPad 850 was a PReP (PowerPC Reference Platform) machine, technically quite similar to the desktop Power Series machines but with a few key differences. The heart of the system was a 100MHz 32-bit PowerPC 603e CPU, a low-power member of the PowerPC family (only about 6W power consumption at full speed). In 1995, this was quite a lot of power in a mobile system, especially in terms of floating-point performance.

The ThinkPad 820 used a 32-bit memory subsystem, while the 850 utilized a 64-bit data path much like the contemporary Pentium processors (and therefore also required memory upgrade modules to be installed in pairs). The base system came with 16 or 32 MB RAM and was upgradable to 96MB (48MB for the ThinkPad 820). 96MB RAM in a laptop was a massive amount in 1995.

The 850 used IC DRAM modules rather than standard SIMMs or DIMMs. This makes upgrading memory in these systems somewhat tricky.

While the Power Series desktops used a “Dakota” memory controller, the equivalent part on the ThinkPads was called “Idaho”. The Dakota is fairly well documented in the original PReP specification; the Idaho much less so. The ThinkPads also used a power management controller called “Carrera” about which very little is known. Another difference between desktops and laptops was that the ThinkPads included a PCMCIA controller and two PC Card slots.

Another difference was graphics. The ThinkPads had a built in Western Digital WD90C24A2 VGA LCD controller with 1MB VRAM. This chip drove an 800×600 TFT display (640×480 on some models). The ThinkPad 850 additionally included a video capture chip; this is an ASCII Corporation V7310 VGA overlay—unfortunately, no documentation for chip appears to be available. A snap-on camera was available for the 850, an early precursor of modern built-in cameras (we’re talking 1995!).

Audio was taken care of by a Crystal Semiconductor CS4231 chip. This chip was compatible with Microsoft’s Windows Sound System hardware and did not provide any other features. The desktop Power Series 830/850 machines used CS4232 chips which additionally sported Sound Blaster and AdLib (OPL3) compatibility. The ThinkPad sported built-in stereo speakers and a microphone as well as headphone and line in jacks.

Storage was unusual to say the least. The ThinkPad 850 used the same NCR 53C810 SCSI host adapter as the desktop Power Series 440 machine (the 830/850 desktops on the other hand used IDE storage). The NCR 810 was one of the earliest PCI SCSI controllers available, which was no doubt one of the reasons why IBM chose it for the PowerPC prototypes in 1993-1994.

Since the Power Series ThinkPads were designed as high-end systems, they came with a built-in (but swappable) CD-ROM, while a floppy drive had to be attached externally using a proprietary IBM cable (USB didn’t quite exist back then) and a drive enclosure that fit standard ThinkPad floppy drives. The hard disk was unusual in that it supported a soft-selectable SCSI ID, while the CD-ROM utilized classic jumpers. Another slightly unusual characteristic of the CD-ROM was that it could emulate 512-byte sectors, a feature required for bootable PReP CDs. 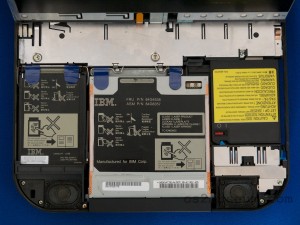 The CD-ROM and hard disk could be pulled out after popping up the keyboard. Once the disk and CD-ROM were removed, the IC DRAM modules became accessible. 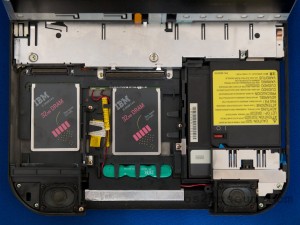 Overall, the ThinkPad hardware was very PC-like—the PowerPC designation was quite appropriate. The memory, disks, floppy drive, serial and parallel ports, PCMCIA controller, even the interrupt controller and DMA controller were just like on Intel ThinkPads. The SCSI disk and CD-ROM were rather exotic, but not something that would have any trouble working in a PC. It is worth noting that although the ThinkPad had no ISA slots, it did have an ISA bus with several devices attached and used an Intel SB82378ZB PCI-to-ISA bridge.

The system as a whole shared many components with IBM’s contemporary ThinkPads, especially models 750 and 755. Only the CPU was a PowerPC instead of a 486 or a Pentium, and the system could operate in big endian mode.

The firmware in the ThinkPad 850 was similar to the desktop Power Series firmware but more self-contained. A mouse driven, graphical Easy Setup was the only interface normally visible to the user. Instead of requiring a SMS (System Management Services) diskette to make changes (echoes of a PS/2 reference disk or a PC/AT setup floppy), everything was built into the firmware. No doubt this was a consequence of the fact that the ThinkPads did not come with a built-in floppy drive. 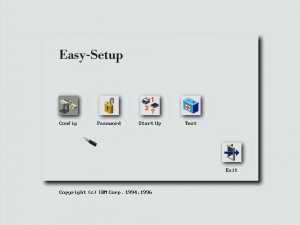 Naturally the firmware conformed to the PReP specification. It was relatively simplistic and differed from both an x86 BIOS and Open Firmware in that there were no run-time services whatsoever. The firmware loaded the OS (or more likely its boot loader) from a storage medium, built “residual data” describing the system’s hardware, and started executing the OS bootstrap code. From that point on, the OS had to take over and fully control the hardware.

Unlike a typical PC BIOS, the Power Series firmware offered very few configuration options. Apart from boot priority options, there was almost nothing to configure. On the other hand, the firmware included a fairly extensive set of hardware tests. 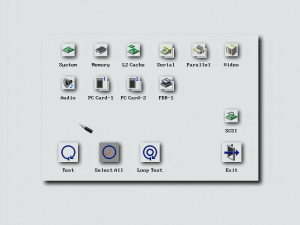 There was a semi-secret firmware console which could be entered by typing “eatabug” on the Easy Setup welcome screen. The console resembled DOS (and also an EFI shell); it could access FAT-formatted floppies and hard disk partitions, as well as ISO-9660 CD-ROMs. It could execute external files and included a number of built-in commands to dump memory, read and write files, etc. There was also a simple debugger, although the disassembler had been removed from the ThinkPad firmware which made it rather less useful. On some SMS disks there was even a basic text editor. 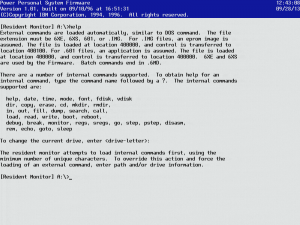 The Power Series firmware was very modular, with drivers and executables in separate files. It was also extensible and hardware could ship with device-specific setup and diagnostic firmware modules. Having similarly well designed firmware on PCs in 1995 would have been a boon, but alas, it was not to be.

The ThinkPad Power Series 850 which is now part of the OS/2 Museum collection is a second generation unit, type 7249-851. It was most likely manufactured in mid-1996, although it is difficult to ascertain which parts are original and which parts may have been replaced at some point.

The laptop’s shell is quite battered—the photos clearly show this—and almost all the hinged lids (battery, PCMCIA slots, rear ports) are missing. The battery is dead, though anything else would have been a real surprise. On the other hand, the inside of the system is in very good condition. The display has no dead pixels and the keyboard has almost zero wear. The only annoying issue is that the left trackpad button only functions intermittently; this does not appear to be a mechanical problem but simply aging contacts or traces. An external PS/2 mouse handily solves this. 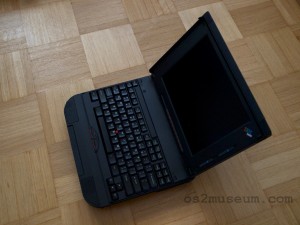 It almost looks like someone bought the system, used it very little, and then threw it into a bin with old parts where it languished for years, until someone realized that it’s actually still worth something.

All attempts to track down a hardware maintenance manual (S30H-2388) or a user guide failed. Luckily the system works well enough that this isn’t a critical problem, and the ThinkPad 7xx series HMM shed some light on the technique of dismantling the keyboard. 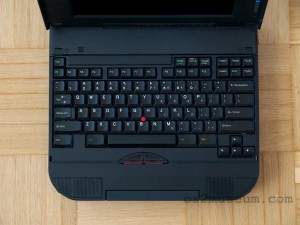 The unit came with version 1.01 of the firmware. An image of the original 1.0 firmware is nowhere to be found; a later version does not appear to exist.

It was necessary to purchase an external floppy drive (Windows NT or Solaris cannot be installed without one), but luckily this wasn’t difficult as the Intel-based mid-1990s ThinkPads used exactly the same drives.

All in all, the ThinkPad 850 is a very interesting part of the history of computing, a rare RISC laptop with many of the trimmings of modern portables.

This entry was posted in IBM, PowerPC. Bookmark the permalink.