Readers of this blog may have noticed that besides OS/2 software, I have interested in PC sound cards. I thought I had a decent idea about the major milestones in PC sound history, but I had to perform a few adjustments after a kind reader sent me this card: Now, the above card is obviously a Microchannel adapter; the connector looks like PCI, and it is in fact physically identical, but logically it’s completely different. It is the IBM M-ACPA/A (ACPA stands for Audio Capture/Playback Adapter).

I had heard of ACPA sound cards before, but I hadn’t known the exact specs, and I didn’t realize just how old they were. The card in the photo is from mid-1991, a contemporary of the Sound Blaster Pro, but it’s already the second generation (Revision B).

The following text is etched on the reverse side of the PCB: COPYRIGHT REXON/TECMAR INC 1991, MANUFACTURED FOR IBM. Tecmar was one of the first companies producing PC adapter cards, and in the 1990s ended up as a SCSI tape backup brand. But some of Tecmar’s earliest boards were data acquisition cards, and in fact Tecmar spun off Scientific Solutions, a company specializing in data acquisition hardware. 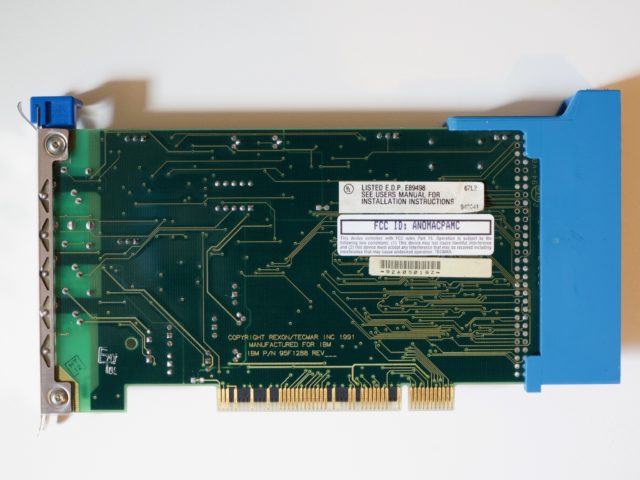 According to the Scientific Solutions (SSI) history page, IBM approached Tecmar/SSI in 1986, and the resulting ACPA sound cards were released in 1989. The cards were available in Microchannel and ISA versions. The ISA variant was marketed for IBM PS/2 systems, but there is no obvious reason why it wouldn’t work in a generic PC. Now, the interesting part is that (as the SSI page mentions) the ACPA showed up a few months before the Sound Blaster; more about that later. The ACPA was one of the very first PC sound cards. It wasn’t a clone or a knock-off, and in fact it inspired one or two newer designs.

What’s in an ACPA?

Let’s provide a brief overview of the core ACPA components and its architecture. The heart of the card is a Texas Instruments TMS320C25, a 40 MHz fixed-point DSP. There is 4 KB (2K×16) of sample memory and 16 KB (8K×16) of shared SRAM accessible by the host and the DSP.

The DSP runs the sound card and besides shuffling data handles sample rate adjustments (decimation/interpolation), compression, etc. The DSP is programmable and has been used to handle audio tasks such as MIDI playback, as well as non-audio tasks like JPEG compression and decompression assistance.

On the MCA version, there’s a TI CF62357APQ chip with is a custom VLSI device, presumably providing a bus interface and probably also the sample memory, as well as a data path from the ADC and to the DAC. The ACPA uses a few I/O ports, one interrupt, and maps a 16 KB region of memory. It does not use DMA at all. The ACPA can handle simultaneous recording and playback.

Further reference information about the ACPA can be found here.

It is obvious that the ACPA is not compatible with the Sound Blaster, Windows Sound System, or any similar standard, because it predates all of those. It was designed to handle CD-quality simultaneous audio recording and playback, unlike the vast majority of the early 1990s sound cards.

IBM’s own Mwave (1993) is a fairly obvious descendant of the ACPA. It is likewise DSP based, but the Mwave DSP is significantly more powerful, with lots more memory and therefore much more advanced capabilities. The Mwave DSP can handle modem functionality, Sound Blaster emulation, wavetable synthesis, etc.

The Turtle Beach Multisound cards (1991) may well have been also inspired by ACPA. The original Multisound used a similar architecture with a DSP (Motorola 56K) and shared memory.

In the early to mid-1990s, there were several other DSP-based designs that were quite possibly inspired by the ACPA and/or Mwave. These included the AT&T VCOS/RoadRunner (AT&T DSP3210), Cardinal Technologies DSP and Adaptec AudioEdge boards (Analog Devices ADSP-2115), or Sierra Semiconductor Aria chip set (Texas Instruments TMS320C25, the same DSP the ACPA used).

Comparing the digital audio capabilities of the ACPA and Sound Blaster is instructive. The cards were developed completely independently but released within a few months of each other in the second half of 1989.

The marketing and pricing of the boards was completely different. The ACPA list price was originally $565, the Sound Blaster around $250, but in both cases the prices significantly dropped within a year. The Sound Blaster was a superset of the AdLib music synthesizer, also including a game port and digital sampling and playback.

The Sound Blaster included a “DSP” or Digital Sound Chip (not a Digital Signal Processor like the TMS320C25), an 8-bit 12 MHz Intel 8051 microcontroller. 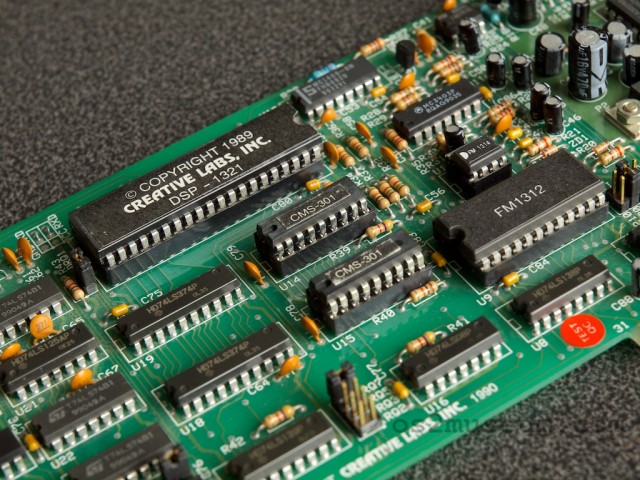 The Sound Blaster supported 8-bit monophonic recording and playback with sampling rates up to about 13 kHz. There was no simultaneous playback and recording, and glitch-free playback of streaming audio was not possible.

The ACPA supported simultaneous 16-bit stereo recording and playback, with recording up to 44.1 kHz (or twice that in mono) and playback up to 88.2 kHz, and the DSP could provide on-the-fly compression or decompression.

In other words, where digital audio was concerned, the 1989 ACPA was a bit more capable than the 1992 Sound Blaster 16. Of course none of that mattered because the Sound Blaster was the one to gain critical mass and spawn a whole industry of clones, and in the process teaching the world a thing or two about marketing mediocre hardware as a premium brand.

That is not to say the ACPA was unsuccessful. IBM sold ACPA cards from 1989 to 1995, and even at that point the ACPA’s capabilities weren’t exactly outdated. A design ahead of its time.