Just a few weeks after successfully repairing a trivial problem with a Roland LAPC-I caused by improper storage, I happened to run across another troublesome board, a VL-bus based ATI Graphics Ultra Pro from 1993. 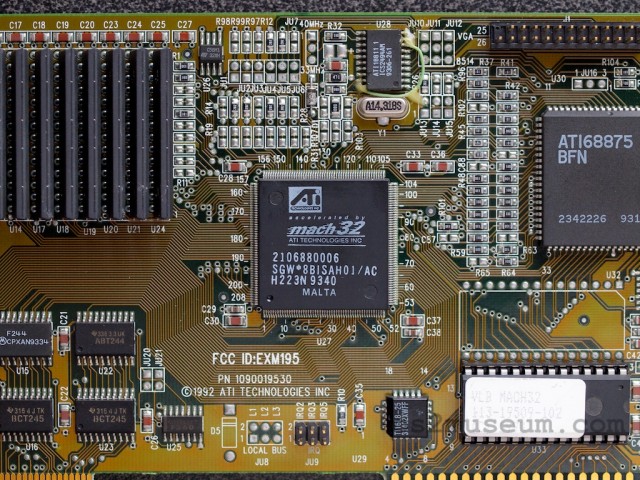 It’s a nice enough card with an ATI mach32 chip, 2MB VRAM, 8514/A compatibility, and 135 MHz RAMDAC allowing resolutions up to 1280×1024 pixels with good refresh rates. The card seemed to be working fine except for one slight problem: There was nothing visible on the screen. And by that I mean that the card was producing good signal which the monitor could synchronize to, and clearly responded to mode sets (slight flashing visible), but the output was simply black on black no matter what I did. What could be the problem.

At first I suspected some kind of BIOS problem but quickly found out that the BIOS contents were identical with another VLB mach32 card, and in fact swapping the BIOS chips made no difference whatsoever.

Next I considered corrupted EEPROM settings, but even after restoring factory defaults (with help of the other mach32-based card to learn the exact sequence of keystrokes needed to operate ATI’s INSTALL utility), nothing changed. Interestingly, running the tests (‘TEST /x’) produced no error log, which would indicate that all tests passed.

OK, so probably some trouble with the RAMDAC that affects the output but not software-visible functionality, but what? The symptoms were such that the sync signals clearly worked, but the RGB signals did not. The RAMDAC chip (ATI 68875 BFN)  was warm to the touch, and since it produces the sync signals it couldn’t be completely broken.

I carefully inspected the component side for any damage like fallen off resistors (can happen with SMD devices) or burns. Didn’t find anything. After staring at the reverse side for a while, I noticed a small scratch, about 8mm long, which crossed several traces. 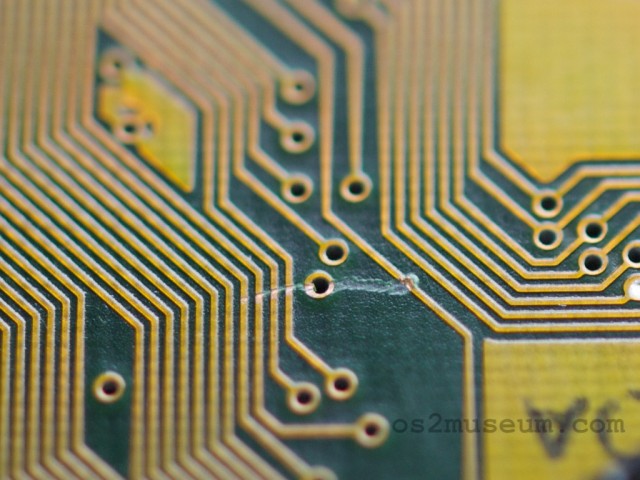 A quick session with an multimeter confirmed that three of them were unharmed but the fourth one was broken. The damage was very hard to see and the broken trace looked like it was just scratched, but the ohmmeter didn’t lie. Could that be the problem?

To test the theory, I inserted a patch wire into holes that were very conveniently located on either side of the damaged trace. Bingo! There was video and the screen looked just fine.

The final step was properly repairing the broken trace. I simply put a tiny drop of solder in the damaged spot. The fix is barely visible but it works quite well. The Graphics Ultra Pro VLB has solid image (at least with the ATI68875 DAC), excellent compatibility, and it’s no slouch when paired with a 486 DX2-66.

Successfully fixed with a drop of solder

Another piece of old junk saved from the trash heap. Mission accomplished.

This entry was posted in ATi, Hardware Hacks. Bookmark the permalink.