Children of the Bus Wars

In the late 1980s and the early 1990s, the so-called Bus Wars raged. A few years after the PC/AT was released, it became clear that the ISA bus could not keep pace with faster CPUs and peripherals, especially graphics cards and SCSI HBAs.

IBM’s solution, Microchannel or MCA (1987) was technically excellent, radical, and ultimately a failure. Compaq and the “gang of nine” bet on EISA (1989), a less ambitious but in many ways very similar bus with one major difference—backwards compatibility. EISA was in practice even less successful than MCA and practically unheard of outside of servers and some workstations.

Around 1992, the VESA committee standardized the VESA Local Bus or VLB, geared towards but by no means limited to graphics cards, and designed primarily for the 486’s local bus. For about two years, VLB was very successful and graphics cards designed for VLB were unbeatable.

Around the same time, Intel worked on PCI, a bus which successfully learned from past mistakes. In late 1993, the first PCI systems and adapters became available, and PCI in combination with Pentium systems very quickly destroyed all competition.

For a short while, all five buses (ISA, MCA, EISA, VLB, PCI) existed in the market. Some adapters were available in two or three bus variants and a precious few went all the way. One of those was ATI’s mach32 graphics chip and the adapters based on it, Graphics Ultra Pro and Graphics Ultra + (using VRAM vs. DRAM, respectively).

The mach32-based ATI Graphics Ultra is a true child of  the bus wars. In 1994, ATI sold the Graphics Ultra in all five bus variants, something not imaginable any any other point in PC history. The OS/2 Museum presents the entire family: Five ATI mach32 graphics cards built in 1994. 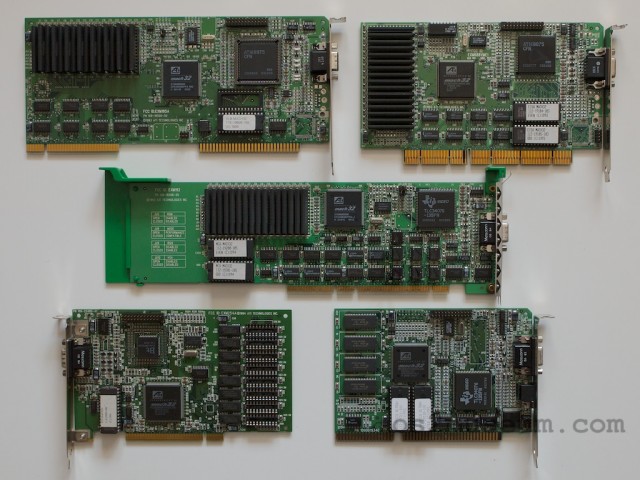 The mach32 was ATI’s first chip with PCI support, the last with MCA support, and the only with EISA support. The MCA, EISA, and VLB units happen to be VRAM-based, the ISA and PCI variants use DRAM. The mach32 cards used a variety of DACs with pixel clocks between 80 and 135 MHz. The maximum resolution was 1280×1024. The VRAM-based cards tended to use better DACs and the image quality was generally very good.

For comparison, a look at the five different bus connectors: 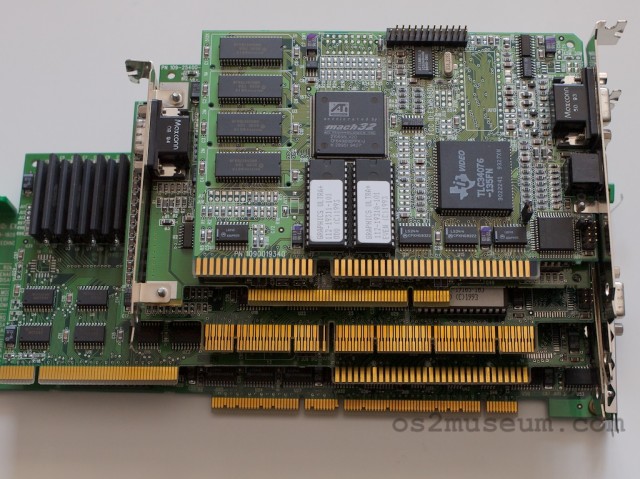 At least the ISA variant was available with a mouse port and came with a mouse. The EISA and VLB PCBs had space for the mouse connector as well (on MCA it made no sense and on PCI it wasn’t technically possible).

It is difficult to make direct performance comparisons because there were no five-bus motherboards and four-bus boards are exceedingly rare. The OS/2 Museum can only run head to head comparisons in PCI/EISA/ISA or PCI/VLB/ISA systems. However, benchmarks are something for a follow-up post. 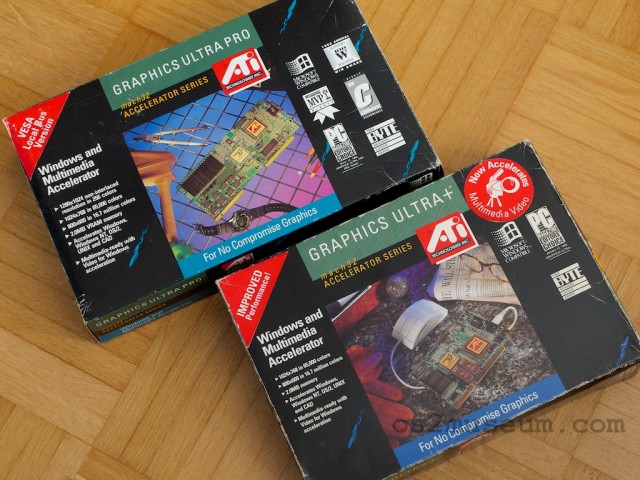 The ISA-based mach32 boards (such as the Graphics Ultra+ definitely suffered from a bus bottleneck. How much that was felt depended on the application—as long as the accelerator was busy, any differences were negligible. But larger bus transfers were slow on ISA.

The VLB-based mach32 boards might be the most widespread. The bus was noticeably faster than ISA. A VRAM-based Graphics Ultra Pro with a good DAC was a very nice VLB card, with the caveat that the mach32 reportedly did not work with bus speeds beyond 33 MHz.

The PCI variant of the mach32 was a latecomer and required the ‘AX’ variant of the chip. The PCI based mach32 boards tend to have lower speed DACs and DRAM. The newer mach64 chip (no longer 8514/A compatible) was designed for PCI from the beginning and quickly replaced the mach32.

The MCA and EISA variants are quite uncommon, and it’s hard to say which one of them is rarer. EISA graphics cards are generally very scarce and only a handful of models was ever produced. One of the major reasons was the fact that most EISA systems were servers which did not need fast graphics and an ISA VGA card was sufficient. 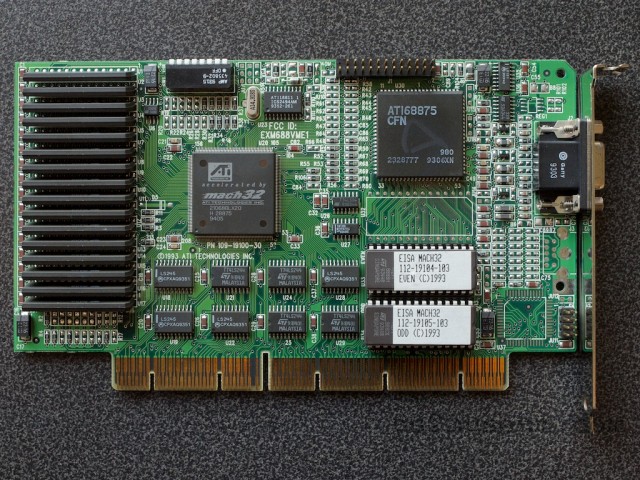 Note the unused space for a bus mouse on the EISA PCB (lower right corner).

While MCA graphics cards were sold in much larger quantities than EISA, in the early to mid-1990s there were very few non-IBM offerings. The Microchannel market was generally uninteresting to OEMs because the vast majority of sales happened in the ISA, VLB, and later PCI form factors. 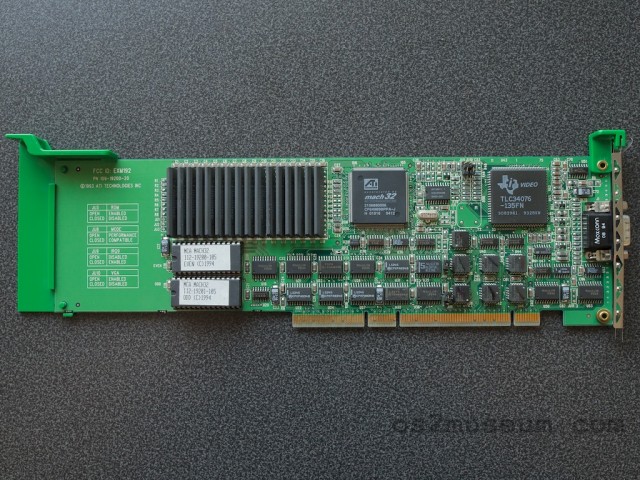 ATI’s mach32 was one of the few 3rd party Microchannel graphics cards available in 1994. It is possible that ATI only offered a MCA bus variant of the mach32 because it was a successor to the earlier mach8 chip—which was designed in the late 1980s as an improved 8514/A clone and supported nothing but Microchannel and ISA buses.

It is a good thing that by 1995, the bus wars were effectively over and PC users did not have to choose from five different buses when shopping for a graphics card (although AGP arrived just a few years later to make things more interesting again specifically for graphics cards).

11 Responses to Children of the Bus Wars