The OS/2 museum recently obtained a boxed copy of the original Microsoft Windows/386. That is, version 2.01 of Windows/386 from September 1987. 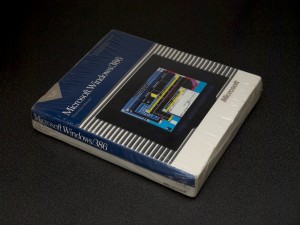 Windows/386 was Microsoft’s first product utilizing the 386 hardware in the DOS world. Microsoft was involved in the port of XENIX to the 386, but that was an entirely different product with a tiny market share.

Windows/386, on the other hand, was the direct predecessor of Enhanced mode Windows 3.0 and Windows 95. Windows/386 was an odd duck; it was essentially regular Windows 2.0 with a few optional “extra bits”. When started through WIN86.COM, Windows/386 was reduced to plain Windows 2.0 running in real mode and needing nothing more than an 8088-based PC. 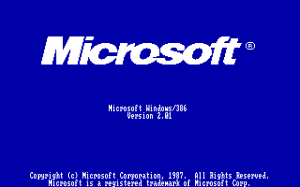 When started through WIN386.EXE however, Windows/386 was transformed into a DOS multi-tasker with a built-in EMS emulator, rather similar in concept to Quarterdeck’s Desqview 2.0 (with QEMM) and other products. A virtual machine (VM) manager allowed the user to run multiple DOS sessions. One VM was always reserved for Windows and other VMs could be created on demand. The same basic architecture was used in Windows 9x. Windows/386 from 1987 was a historically very important product. Not necessarily because it was particularly innovative or better than the contemporary competition (particularly Desqview), but rather because it was the first in a line of highly successful DOS-based Windows products for the 386 and later CPUs.

Now the remaining question is… what happened to Windows 2.02, and was there Windows 2.00? Perhaps not. If InfoWorld is to be believed, Windows/386 was indeed released before regular Windows 2.0—on a deadline so that Compaq could bundle Windows/386 with its 386 machines. Since Windows 2.0 was released a few weeks later, it would make sense that the version number went from 2.01 to 2.03, and the interim versions were not necessarily publicly released.

This entry was posted in PC history, Windows. Bookmark the permalink.