A quick update on the Ultimate Museum PC (should it be called simply the UMPC?). The system is currently using a Supermicro P6DBE board with 2x Pentium 850MHz (Coppermine, 100MHz FSB) processors, 1GB RAM, a 120GB IDE disk, an ATAPI DVD-ROM drive, a SoundBlaster AWE32 PnP, a 3Com 100Mbps Ethernet controller. The graphics question has not been entirely settled yet; see below for more.

The system has been very stable so far. Perhaps unsurprisingly—nothing is overclocked and all components are on the higher end of the quality spectrum (if a decade-plus old). The disk was moved from the older BP6-based system and already contained DOS, OS/2, and Windows XP.

Getting Windows XP to run prompted some cursing, occasioned by Windows’ brain damaged “Plug and Play” implementation. Windows XP kept starting to boot but then simply resetting the system (perhaps a triple fault?), without any indication what might be going wrong. Safe mode etc. made no difference. OS/2 had no trouble booting up, which was an indication that the hardware was probably fine. The cause of the problem was perhaps obvious to anyone familiar with Windows XP’s quirks…

Windows had been installed with the ACPI HAL, but between BIOS upgrades, clearing the CMOS, and testing various BIOS setting, the ACPI support in the BIOS ended up being disabled. Incidentally, enabling ACPI in the P6DBE BIOS is anything but obvious: the power management setting must be “disabled”.

Once ACPI was re-enabled, Windows XP had no trouble booting. That prompted the installation of Sandra 2001 to verify that the system is performing as it should (it is), as well as the addition of 3DMark 2000 and 3DMark 2001SE to help find the right graphics card.

Finding the “best” graphics card isn’t entirely straightforward. The objective is to find something close to the best performing card with can operate in a 3.3V AGP 2x slot. For logistical reasons, the card should have both VGA and DVI output. PCI cards weren’t considered (perhaps a mistake?) on the assumption that the interface would be too limiting compared to AGP 2x; the maximum PCI bandwidth is 133 MB/s, while AGP 2x can deliver 533 MB/s, moreover an AGP device uses a separate bus where it doesn’t have to compete for bandwidth with other devices.

The obvious contenders are nVIDIA and ATI. Matrox cards are relatively uninteresting due to their noticeably lower 3D performance, even though, say, a Matrox G450 is a very fine graphics card otherwise. “Other” brands like S3 weren’t even considered.

Around 2003, both nVIDIA and ATI stopped making their high-end graphics chips compatible with AGP 2x. ATI’s top of the line model and king of 3D performance back then was Radeon 9800 XT. Unfortunately the 9800 XT is based on the R360 GPU with no AGP 2x support. However, the older and only slightly slower Radeon 9800 Pro (R350) can still be used in the old 440BX boards. 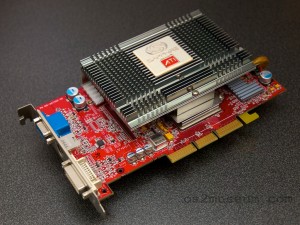 In theory, ATI’s fastest would be a Radeon 9800 Pro with 256MB RAM. In practice, these cards turned out to be very hard to find, while 9800 Pros with 128MB RAM are plentiful and only slightly slower. The lower amount of memory reportedly didn’t make noticeable difference for games of the era.

On the nVIDIA side, one obvious choice is the FX5950 Ultra. This was a direct competitor of the Radeon 9800 Pro/XT, with very similar performance levels but generally slightly slower than the 9800 XT. It is currently unclear whether any newer nVIDIA cards with AGP 2x supports might have been actually faster than the FX5950 Ultra. 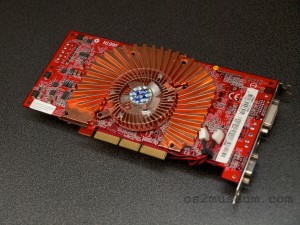 Performance aside, there is also driver support to consider. Both the ATIs and the nVIDIAs are of course well supported under Windows, but with other operating systems things look a bit different. For OS/2, Radeons are clearly the better choice. For X11, nVIDIA might be better as long as a particular release is supported by nVIDIA’s own drivers. Since ATI was more open about providing programming documentation, the Radeons tend to be generally better supported under “alternative” operating systems.

A week or two after the initial research, the new old graphics cards arrived. There’s a nVIDIA FX5950 Ultra built by MSI (FX5950U-VTD256) and a Sapphire Radeon 9800 Pro Atlantis.

The nVIDIA has large heatsinks and fans on both sides of the card. The ATI is purely passively cooled with massive heatsinks. The passive cooling is both good and bad news—the card is absolutely quiet, but it’s also wider, and just barely fits on the P6DBE board (the processors get in the way a bit). On other motherboards it might not fit at all. Both cards require a separate power supply cable to be plugged in.

Here’s how the two cards do in benchmarks; for comparison, the figures for the older Radeon 9700 Pro are also listed. Again this is with a Supermicro P6DBE board, 2x Pentium III 850 MHz at 100MHz FSB, 1GB SDRAM.

Despite the smaller video RAM size (128 MB vs. 256 MB), the Radeon 9800 Pro has a slight edge in 3DMark. That said, the difference is clearly not big enough to be a deciding factor. If anything, both cards are a bit overpowered for the Ultimate Museum PC. It’s also worth noting that the older Radeon 9700 Pro does almost as well as the 9800 Pro and still a tad better than the FX9590 Ultra, at least in the default benchmarks.

In a quick real-world test (the original Max Payne running at 1680×1050, 32bpp), both cards performed very well indeed with no discernible differences.

With 1GB SDRAM, the system is maxed out in terms of memory capacity. A 120GB IDE disk is also about the largest that can be used without hitting the 128MB BIOS limit. Either of the above mentioned graphics cards is probably fairly close to the fastest a 440BX-based board can handle.

The weak spot is the CPU. Without slockets or overclocking, the board could take a 1GHz processor. Unfortunately, the 100MHz FSB Coppermine Pentium IIIs are quite hard to find, especially in Slot 1 form factor. With the use of slockets, 1.1GHz processors could be used, but then there are two problems: the 100MHz FSB variants are again hard to find, and because only Socket 370 variants existed, slockets would be required. That brings another problem—finding slockets which support dual-CPU Pentium III operation. Many slockets support dual (Mendocino) Celerons, but not Pentium IIIs. Slockets are easy to find, but slockets known to support dual Pentium IIIs are apparently more or less extinct.

Another avenue yet to be explored is installing Windows 7 (32-bit, obviously) on the Ultimate Museum PC… just to see how painful it might be.

This entry was posted in PC hardware. Bookmark the permalink.