NetWare for OS/2 was one of the most technically interesting products of the mid-1990s. Novell’s NetWare was long established as a file server for LANs; since NetWare/386, Novell’s NOS ran as a dedicated server which was loaded from DOS but took over the entire system once started. But ever since the late 1980s, Novell was talking about a non-dedicated NetWare server running on top of OS/2.

In August 1993, Novell finally released NetWare for OS/2 as a $200 add-on to NetWare 4.01. With the add-on, NetWare 4.01 server could be installed on top of OS/2. A single OS/2 machine could function as an OS/2 application server, a NetWare server, and could also run the NetWare client at the same time. 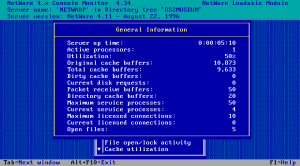 NetWare for OS/2 was essentially a paravirtualization layer (even though the term did not yet exist at the time) for NetWare which largely replaced direct hardware access by functionality provided by OS/2. The NetWare server could still use its own network drivers, but disk access and memory management were handled by OS/2, and NetWare ran as a special task. NetWare for OS/2 could run the same NLMs (NetWare Loadable modules) which dedicated NetWare servers supported.

By the time NetWare 4.1 was released, NetWare for OS/2 was bundled into the standard server product and network administrators could either install the standard dedicated server launched from DOS or non-dedicated NetWare for OS/2. The latter was a bit of of an odd duck; it was unlikely to replace dedicated “lock in a closet and forget” NetWare servers for larger LANs, but was an interesting option for smaller offices where hardware consolidation was an important factor. 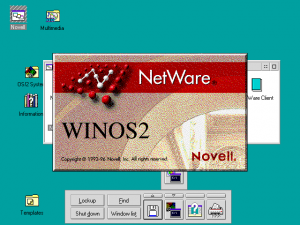 NetWare for OS/2 was also attractive for development purposes. It was the only way to host a development environment, as well as run the NetWare server and client on the same system. Likewise all NetWare remote administration tools could be run on the same machine, either in DOS or Win-OS/2 sessions. 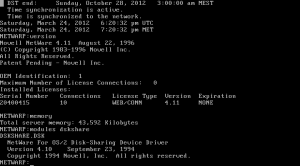 NetWare for OS/2 was probably well over 95% identical to the dedicated variant. It used the same NLMs and ran mostly the same code. There were differences were in several areas. Memory management was handled by OS/2 and NetWare had an option to give back memory to OS/2. Disk access was handled entirely by OS/2, but worked on block device level, not file level. In fact the presence of the DSKSHARE.DSK module (OS/2 disk-sharing device driver) was one of the few signs that NetWare was running on top of OS/2.

In other words, where dedicated NetWare used a DOS FAT boot partition, NetWare for OS/2 used an OS/2 FAT or HPFS partition instead. NetWare required at least one separate partition which it accessed through OS/2 disk drivers but the filesystem was managed entirely by NetWare, just like on a dedicated NetWare server.

NetWare for OS/2 used its own network drivers, but could share network devices with the NetWare OS/2 client (requester) or even with IBM’s network stack.

As mentioned earlier, NetWare for OS/2 ran largely standard NetWare server code. There was a special OS/2 loader, NWOS2.EXE. This was an OS/2 console application which could run either in full screen or in a window on the OS/2 desktop.

Most of the magic was in PNETWARE.SYS and VNETWARE.SYS, a pair of OS/2 device drivers which implemented the paravirtualiation  services. PNETWARE.SYS was a standard 16-bit OS/2 PDD (Physical Device Driver) which provided low-level services such as allocating GDT selectors. VNETWARE.SYS was, interestingly, a VDD (Virtual Device Driver); VDDs were designed to support DOS sessions in OS/2. Unlike PDDs, the VDDs in OS/2 were always 32-bit since compatibility with OS/2 1.x was not a concern.

Novell likely looked for a way to run some of their existing 32-bit code inside the OS/2 kernel and VDDs turned out to be the easiest path. This was an unusual solution, but clearly workable.

Can NetWare for OS/2 be installed in a virtual machine? Yes. NetWare 4.11 for OS/2 was successfully installed on top of Warp 3 and Warp 4 running in VirtualBox. In both cases, OS/2 was set up without networking support and the NetWare client plus server was installed from the NetWare 4.11 CD. Note that it is possible to install the NetWare server without the client. 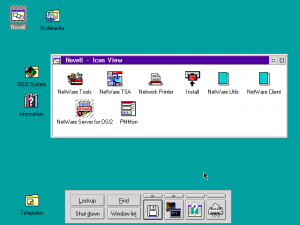 The default AMD PCnet emulation was used. NetWare 4.11 ships with drivers (PCNTNW) for PCnet NICs, therefore no third-party drivers are needed. When configuring storage in the VM, it is important to leave unused space (at least a few hundred megabytes) for NetWare. Either the OS/2 partition must only take up part of the disk, or another virtual disk must be added for use by NetWare. On the whole, installation is very easy and requires minimum of input if the simple installation path is used.

Novell released a patch for the issue in 1997; it is part of the NetWare Support Packs and available separately as 411Y2KP2.EXE. The VNETWARE.SYS file, normally located in C:\NETWARE on the OS/2 system, must be replaced. Note that the dedicated NetWare server does not have this particular issue, though there still are a few other, largely cosmetic Y2K bugs.

As mentioned earlier, with NetWare for OS/2 it was possible to run the remote administration tools, such as NetAdmin, on the same system as the server. 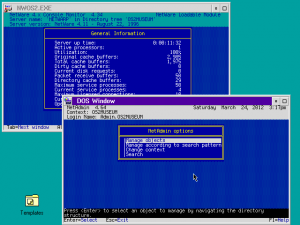 Since some of the NetWare administration were Windows based, it was advisable to use OS/2 Warp with Win-OS/2 as a base for NetWare for OS/2 (a moot point for OS/2 Warp 4 since all Warp 4 releases included Win-OS/2). 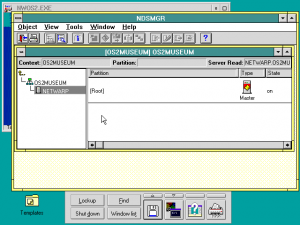 As a slightly pathological case, it was possible to run NetWare for OS/2 in a window on the OS/2 desktop and attach to it via RCONSOLE from a windowed DOS session. Both windows would then be displaying the same content, communicating via RSPX (remote SPX, Novell’s remote management protocol). 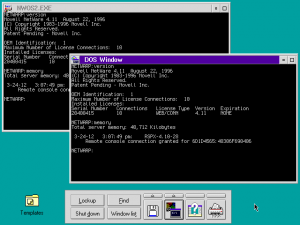 In NetWare 4.1, Novell reportedly added a fast path for the OS/2 client when it was running on the same system as the server; presumably a large part of the network stack was bypassed in that case. 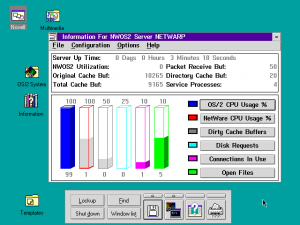 NetWare for OS/2 did little for either NetWare or OS/2. In some ways it wasn’t playing to NetWare’s core strengths, and it was released at a time when NetWare was already losing market share to Windows-based networking. Typical OS/2 customers on the other hand might have wanted to use IBM’s LAN Server instead. Nevertheless, NetWare for OS/2 was a technically highly interesting product, a rare marriage of two very different operating systems.

Thanks to Lewis G. Rosenthal for providing a lot of information about Novell NetWare in general as well as NetWare for OS/2 specifics.

Thanks to Jason Stevens for his input on NetWare and virtualization.

This entry was posted in NetWare, Networking, OS/2. Bookmark the permalink.

2 Responses to NetWare for OS/2