The recently unearthed copy of the near-mythical Multitasking (aka European) MS-DOS 4.0 clearly did not want to be alone. James Lariviere, a kind reader of this blog, provided a disk image of multitasking DOS 4 which was released in 1986 by the French company SMT Goupil. 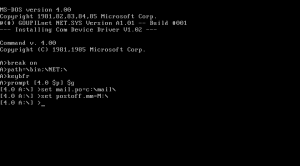 It should be apparent that in 1985, an 8 MHz 186 was quite the speed demon. However, with no protected mode, the G4 had no chance of running the upcoming DOS 5 aka OS/2. But the 8086-compatible multitasking DOS 4 seemed like a good fit.

The surviving files indicate that Goupil was running Microsoft’s MS-NET on top of multitasking DOS 4. MS-NET was a close relative of the IBM PC Network Program and a direct ancestor of LAN Manager as well as modern Microsoft networking products.

How does the Goupil release of multitasking MS-DOS 4.0 differ from the previously available non-OEM-customized copy? As it turns out, very little.

If the timestamps are to be believed, Goupil released multitasking DOS 4 sometime in May or June 1986 since IO.SYS is dated May 15, 1986. However, the bulk of the files is dated November 26/27, 1985—exactly the same as the previously known copy. In fact most of the files are identical.

It appears that Microsoft finished the bulk of the development of multitasking DOS 4.0 at the end of November 1985. However, both the Microsoft and Goupil disks include COMMAND.COM dated February 24, 1986, nearly three months later than the other files. It is likely that Microsoft shipped an OAK to the OEMs at the end of February or beginning of March 1986.

Looking at the timestamps of the files that Goupil modified, it seems that Goupil started working on the adaptation no later than March 1986 (FORMAT.EXE dated March 2, 1986).

So what did Goupil really change? There are trivial changes to FORMAT.EXE and SYS.EXE. For whatever reason, Microsoft’s multitasking DOS 4.0 used IBMBIO.COM and IBMDOS.COM as system file names. Goupil used the standard MS-DOS IO.SYS and MSDOS.SYS naming. In addition, the boot sector contained a “GOUPIL” signature rather than “IBM 4.0”.

The print spooler PRINT.EXE was rebuilt by Goupil, but without any obvious differences. MSDOS.SYS was likewise rebuilt with no apparent differences. In both cases, the copyright string in MSDOS.SYS/IBMDOS.COM was “MS-DOS version 4.00, Copyright 1981,82,83,84,85 Microsoft Corp.”

IO.SYS was naturally also rebuilt by Goupil, and that is the file with the most recent timestamp (May 15, 1986). Strangely enough, the timestamp and version strings embedded inside the binary indicate that Goupil used slightly older source code for building IO.SYS.

There is one important omission in the Goupil release: SM.EXE, the multitasking session manager. There was no obvious way to create new sessions in the Goupil version. Also missing was the SWAPPER.EXE daemon.

There are several newly rediscovered files files not found on the Microsoft disks.

Goupil provided a PS.EXE utility, clearly inspired by UNIX/XENIX. The executable is unfortunately timestamped January 4, 1980, hence its true age is unknown. This utility was quite likely written by Microsoft.

PS.EXE accepted several switches (indicated by a dash, not a slash!) which controlled the output and allowed the user to display various aspects of process state. 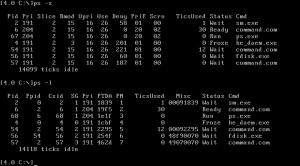 There is a certain level of insight that PS.EXE provides into the structure of multitasking DOS 4. For example, it’s apparent that the standard ~18.2 Hz tick was used as the scheduling quantum. Or that the PTDA (presumably Per-Task Data Area) replaced the DOS PSP, just like it did in OS/2. Or that PIDs (Process IDs), PPIDs (Parent Process IDs), and SGs (Screen Groups) were likewise concepts introduced in multitasking DOS 4 and later adopted in OS/2. 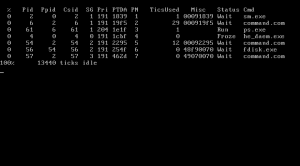 Another significant Microsoft file which surfaced in the Goupil release is DEBUGDD.SYS, a kernel debugger for multitasking DOS 4.0. Unlike DOS, but like OS/2, multitasking DOS 4 had an optional built-in kernel debugger (KDB) which communicated over a serial port. The debugger strongly resembled its cousins SYMDEB and the OS/2 KDB, with the caveat that it doesn’t appear to have had any capability for loading module symbols.

Less interesting but also “new” is DOSSIZE.EXE, a small utility whose sole purpose was to display how much memory various DOS components occupied. 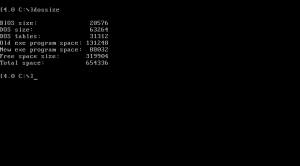 Yet another newly surfaced fragment on the Goupil disk is NET.SYS, clearly a customized MS-NET component for a networking product marketed as GOUPILnet. Unfortunately no other networking utilities are available; however, it is known that MS-NET 2.0 ran on top of multitasking DOS 4.

Goupil originally delivered the software on 360K floppies. Rather predictably, since 360K drives were what the G4 had.

The original disks are probably lost and the surviving disk is a 720K format, created by combining the contents of two 360K floppies (note that the 720K disk is actually formatted with a 360K filesystem).

The disk should work on more or less any PC compatible. Please keep in mind that only fixed disk partitions up to 32MB in size are supported.

Now let’s hope that other OEM releases of multitasking DOS 4 will surface (if they exist), or even better, multitasking MS-DOS 4.1 will.

This entry was posted in DOS, Microsoft, OS/2. Bookmark the permalink.