Perhaps the best known member of the OverDrive family is the original Pentium OverDrive, also known as P24T. It could upgrade most newer 486 systems with Socket 2 or Socket 3. 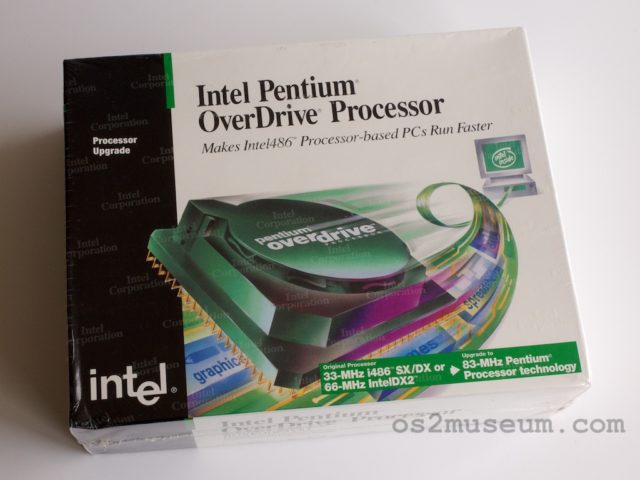 The front of a Pentium OverDrive box.

Two models were available, PODP5V63 and PODP5V83. The nomenclature indicates 5V Pentium OverDrive Processor running at 63 (really 62.5) or 83 (really 83.3) MHz. The processors utilize an unusual (for 486 boards) 2.5× frequency multiplier and are designed for 25 and 33 MHz bus, respectively.

Since the processor core is a 3.3V second generation Pentium (P54C), the OverDrive has a built-in voltage regulator. Because the package dissipates a non-negligible amount of heat, the OverDrive not only has a heatsink like the 486 OverDrives but also comes with a clip-on fan. The advantage of the fan is that it draws power from the socket and does not require any extra wiring. The fan is also easily replaceable in case of mechanical failure. 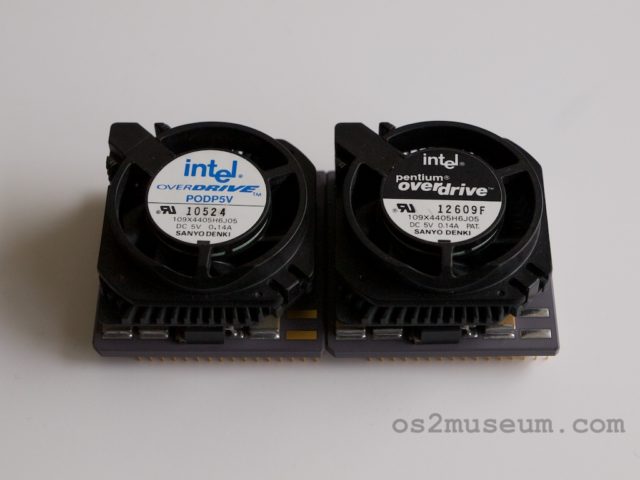 The installation manual is still available from Intel (note the curious spelling of “processer”).

The socket was a new 238-pin affair. It was essentially an extension of the standard 168-pin PGA socket with an extra row of pins on the outside. The OverDrive socket was very similar in size to Socket 5/7 but with a different pin arrangement. 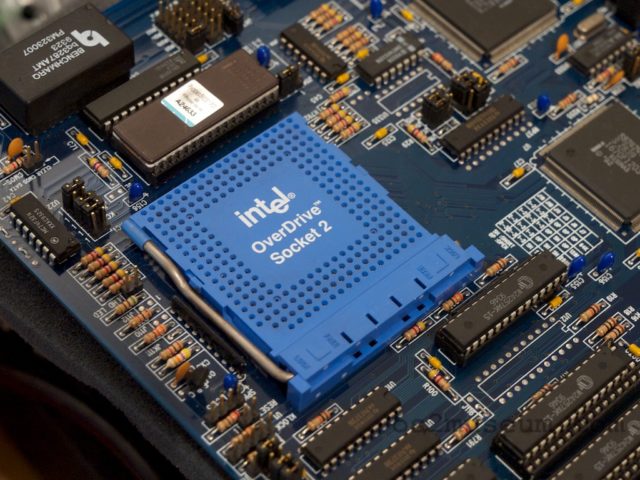 The Pentium OverDrive had fairly predictable problems with compatibility. OEMs were expected to design boards compatible with the Pentium OverDrive without ever having seen one. The upshot was that older boards that would benefit most from an upgrade were the least likely to work, while newer boards worked well with a Pentium OverDrive but also supported other processors with similar performance (DX4, 5×86).

When the Pentium OverDrive was introduced in January 1995, the 63 MHz variant (initially the only one available) was priced at $449 according to contemporary sources. That did not compare very favorably with the $349 100 MHz IntelDX4 OverDrive, which was generally a faster processor.

The Pentium OverDrive is one of the more technically interesting processors since it bridges two different generations. That presented Intel with a number of challenges.

The voltage and heat dissipation were relatively minor problems that a voltage regulator and a fan easily fixed. A bigger problem was that the Pentium had a 64-bit data bus which no 486 board had. In addition, the L2 caches on 486 boards are much slower than those found on typical Pentium P54C systems. Intel’s solution was to increase the Pentium OverDrive L1 cache size from 8+8K (separate code + data) to 16+16K.

The larger cache equalizes the difference somewhat, although a PODP5V83 still doesn’t perform anywhere near a 90 MHz Pentium.

The cache can operate in write-back (WB) mode, if supported by the chipset/board. Newer 486 boards generally do since many latter-day 486s could run in WB mode as well (while all earlier 486 models were strictly write-through or WT).

To software, the PODP looks like a Pentium although it can be easily distinguished through CPUID, being a model 5 rather than model 4 processor (or having no CPUID like earlier 486s). It also reports itself as an OverDrive processor through the CPUID ‘Type’ field. The Type/Model/Family/Stepping (TMFS) value of an OverDrive with S-Spec SU014 is 1532h.

The PODP supports neither the local APIC nor MCE (Machine Check Exception) features of the P54C because these features are not available in Socket 2/3 systems (not supported by the socket itself and therefore unsupportably by the CPU).

A little-publicized fact is that the PODP is in reality not a superscalar processor because the second pipe (V-pipe) is permanently disabled. This can be seen by attempting to force single-pipe execution (U-pipe only) by setting bit 2 of TR12 (MSR 0Eh). The PODP does not react to the setting, while disabling cache or the BTB through TR12 does have noticeable impact—and likewise, disabling the V-pipe through TR12 on a regular Pentium visibly slows things down.

An 83 MHz Pentium OverDrive vastly outperforms a 33 MHz 486 and easily bests a 66 MHz DX2. But when comparing with a 100 MHz DX4, the PODP isn’t generally faster… except for floating-point performance.

It is thus unsurprising that an AMD 5×86 (133 MHz) or a 100 MHz Cyrix 5×86 beats a Pentium OverDrive in integer performance. However, the PODP is king when it comes to floating-point performance, much like RapidCAD was in a 386 socket.

In general the 83 MHz Pentium OverDrive performs a lot like a 60 or 66 MHz first generation Pentium, but much depends on the chipset and board used.

The relatively poor performance is presumably caused by inadequate memory bandwidth coupled with the loss of the second execution pipe.

Not well known, the PODP5V (or Pentium OverDrive processor 5V) was used to upgrade first-generation 60 and 66 MHz Pentium systems. These OverDrives were somewhat rare, which is not surprising since the original 5V Pentium systems were never very widespread due to their high price and reliability problems. 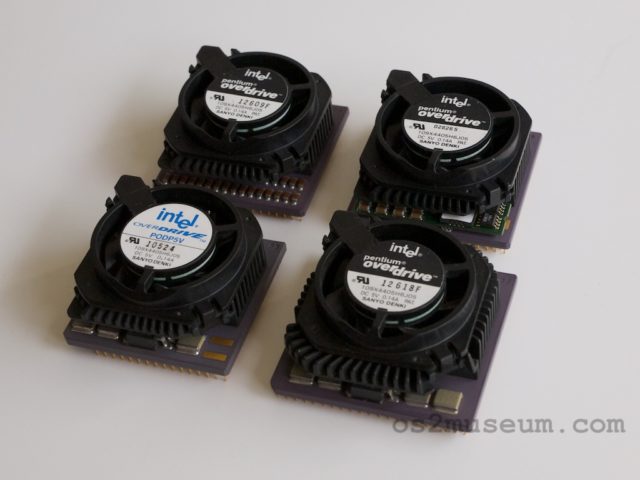 The PODP5V is essentially a clock doubler. It upgrades a 66 MHz Pentium to a 133 MHz Pentium. As such, it brings a sizable performance kick.

The 5V OverDrive uses the second generation Pentium core (P54C), just like a regular 133 MHz Pentium. It comes with a now-obligatory voltage regulator since the newer core runs at 3.3V.

A notable but unsurprising difference between the 133 MHz PODP5V and a standard P54C 133 MHz Pentium is that the former lacks the built-in APIC, or more likely has it permanently disabled. This is a consequence of the fact that the original 60/66 MHz Pentium processors had no integrated APIC and Socket 4 cannot support it.

Given that it’s nearly identical, a 133 MHz PODP5V performs more or less exactly like 133 MHz P54C. However, a Socket 4 board is almost certain to have an older and slower chipset and cache, therefore overall system performance cannot be expected to match a 133 MHz P54C system. That’s where the PODP3V comes in. This is an upgrade processor with a fixed 2.5× multiplier for Socket 5 systems. It does not have a voltage regulator because it doesn’t need one, but it does add voltage filtering. It was available at speeds up to 166 MHz.

The PODP3V was not nearly as popular as earlier 486 OverDrives. One apparent reason is that while 486s OverDrives doubled (and later tripled) the clock speed, the PODP3V couldn’t do that (typically upgraded from 100 to 166 MHz or from 90 to 150 MHz).

It is worth noting that at least the 166 MHz PODP3V166 model (S-Spec SU125)  is not distinguishable from a regular 166 MHz Pentium by software. Unlike most other OverDrives, this processor does not set the OverDrive type in CPUID.

The 3V Pentium OverDrive processors have a built-in local APIC (just like regular P54C CPUs) and are capable of dual-processor operation.

The final member of the Socket 5 (and Socket 7) OverDrive family is the Pentium OverDrive MMX or PODPMT. It was available in several variants with a fixed 2.5× or 3× multiplier. The fastest model runs with a 66 MHz bus and 3× multiplier to achieve 200 MHz internal clock speed. 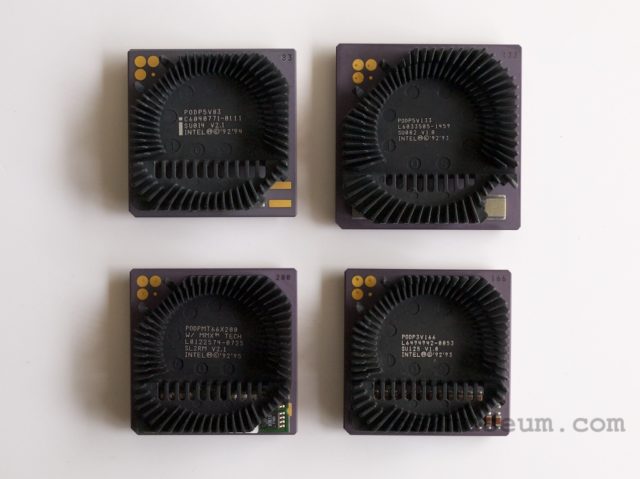 Just like a regular Pentium MMX (P55C) processor, the OverDrive MMX chip has larger 32 KB (16 + 16) L1 cache (compared to 16 KB total in earlier models). And just like regular Pentium MMX, the PODPMT has a built-in APIC and can be used in dual-processor systems.

Unlike the PODP3V, the PODPMT does report itself as an OverDrive part and is recognized as such by BIOS. Model PODP66X200 (S-Spec SL2RM) reports TFMS value of 1543h, indicating an OverDrive CPU family 5, model 4, stepping 3.

The Socket 7 processors saw the voltage games (later repeated for Socket 370) where the socket remained mechanically the same but processor voltage kept decreasing. Pentium MMX required split voltage, but a given Socket 7 board might or might not be able to supply it. The PODPMT adds the required voltage regulation and as a side effect can also be used in Socket 5 systems, since the onboard voltage regulator takes care of the biggest difference between Socket 5 and Socket 7.

There are clear parallels between PODPMT and the IntelDX4 OverDrive. In both cases the processor core is more or less completely unmodified newer model, but the processor package includes a built-in voltage regulator and heatsink (and in the Pentium OverDrive case, also a fan).

The Pentium OverDrive product line enjoyed moderate success, especially early on. But it ran into what would soon kill off the OverDrive entirely: Too little, too late, too expensive. Part of the problem was that the x86 platform started evolving faster and a mainstream socket design wouldn’t last 5+ years anymore. A 4-5 year old PC couldn’t be effectively upgraded with an OverDrive CPU, and while a 2-3 year system could, the cost/benefit ratio wasn’t attractive. 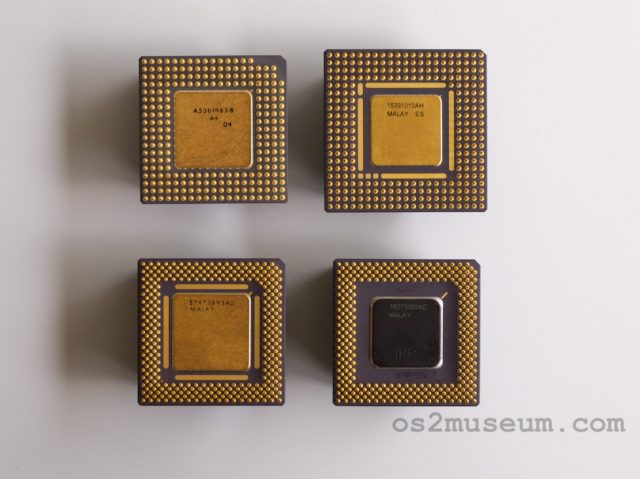 The original Pentium OverDrive was an excellent upgrade for a 25 or 33 MHz 486, but not for a 100 MHz 486 (let alone the 133 MHz AMD parts). The PODP5V133 was a solid upgrade (doubling the clock speed) but Socket 4 systems were never widespread. The PODPMT would have been again somewhat interesting for older Pentium systems, but couldn’t keep up with the Pentium II processors available at more or less the same time. For those reasons, the Pentium OverDrive processors were never as widespread as the 486 OverDrive CPUs.

But there was still one last OverDrive processor to come…

This entry was posted in 486, Intel, PC history, Pentium. Bookmark the permalink.