Installing Windows 95 on SCSI in a VM

For the adventurous, it is possible to install Windows 95 in a VM configured with SCSI storage (hard disk, CD-ROM) attached to an emulated BusLogic HBA. This works in VirtualBox, but there’s a catch—the emulated PCI BusLogic HBA must have ISA compatibility disabled. If it does not, the installation will hang: 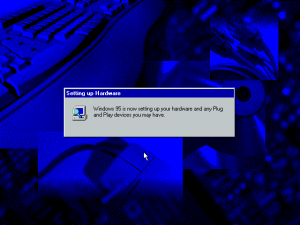 After several minutes, there may be a blue screen complaining about inability to write to the hard disk.

Let’s start with the solution. In VirtualBox, the following needs to be run prior to starting the VM (split into two lines here for readability):

The problem is most likely caused by a bug in the BusLogic drivers shipped with Windows 95, although it might be more accurate to say that the drivers are not just clever enough. But what’s really going on?

Since the early 1990s, BusLogic produced bus-mastering ISA, EISA, and Microchannel SCSI host bus adapters (HBAs) compatible with the Adaptec AHA-154x line (the HBA with by far the best industry support in approximately the 1988-1998 period). BusLogic supported the odd 24-bit big-endian addressing scheme pioneered by Adaptec, but later extended it with 32-bit little-endian addressing which made BusLogic HBAs a good choice for systems with more than 16MB RAM.

In early 1994, BusLogic became one of the first vendors offering PCI SCSI HBAs, no doubt aided by BusLogic’s experience with EISA and Microchannel. The BT-946C was followed by BT-956C/CD, and finally BT-948, BT-958, and BT-958D. 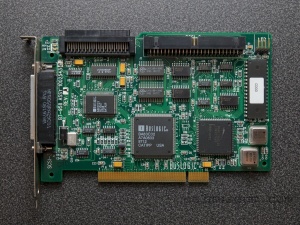 While moving the adapter to PCI did great things for performance, it caused a problem with compatibility. The BusLogic adapters could be used with various server and workstation operating systems (NetWare, SCO UNIX, ISC UNIX, Solaris, OS/2, Windows NT) either using generic AHA-154x drivers or BusLogic-specific drivers with 32-bit bus-mastering support.

Either way, software would typically look for the HBA at I/O port 330h or 334h. However, a PCI HBA will have its resources (including port address) configured by the system BIOS at a completely different port range and won’t be found by older drivers. BusLogic decided to slightly violate the PCI specification and optionally respond to I/O cycles at the old ISA-compatible addresses.

In the older BT-946/956PCI  controllers, the default ISA I/O compatibility was Primary, while the later BT-948/958 had the compatibility disabled. Additional information can be found for instance here.

In VirtualBox 4.3, the default setting is Alternate because this works well with various older operating systems. For old OSes with no PCI support, the fact that the HBA exposes two port ranges doesn’t pose any problem, since the PCI port range will be simply ignored.

For newer OSes, this doesn’t cause difficulties either—the typical strategy is to probe for PCI devices first, and the BusLogic driver disables the ISA compatibility range (if it was enabled). That is what for example Linux 2.4+ or Windows NT 4 do.

Windows 95 unfortunately falls right into a grey zone in between: It detects the PCI device and loads an appropriate driver, but does not disable the ISA port range. It also probes the ISA ports and loads the driver again. And that’s exactly the problem.

During installation, Windows 95 uses the PCI BusLogic miniport driver (BUSLOGIC.MPD), but later on probes ISA devices and loads a second instance of the BusLogic driver. That’s where things go wrong, since the drivers start fighting each other.

In Windows 98, a similar but far much milder variation of this problem occurs: 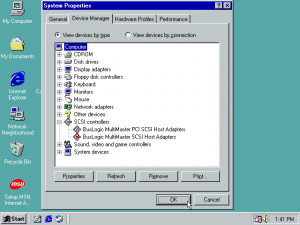 The driver is loaded twice again, but the ISA instance fails to initialize and does not interfere with the PCI driver. The ISA driver can be simply uninstalled to get rid of the red X.

An attempt to reproduce this issue in VMware was not successful. VMware either does not support the ISA compatible port range at all, or if it does, it’s entirely undocumented and well hidden. As such, the conflict caused by doubled BusLogic driver cannot occur.

It’s unclear if this problem occurs on real hardware. It would have affected only a tiny number of users trying to install Windows 95 on one of the early BusLogic PCI HBAs, and very few people bought SCSI gear in order to run Windows 95 on it.

It’s probably worth pointing out that there is little to be gained from installing Windows 95 on SCSI. The OS is new enough to support ATAPI CD-ROMs, which would otherwise be the major reason for going SCSI (such as with OS/2 2.1 or Windows NT 3.1). Nevertheless, it can be an interesting exercise. 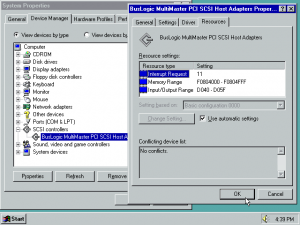 The above shows a successful install of the original Windows 95 release in a VirtualBox VM with BusLogic SCSI emulation. The BusLogic ISA compatibility was disabled as explained at the beginning of this article.

This entry was posted in BusLogic, SCSI, VirtualBox, Windows 95. Bookmark the permalink.

7 Responses to Installing Windows 95 on SCSI in a VM