With VirtualBox 4.3, it is possible to install the oldest known pre-release of Windows NT directly from CD, the way Microsoft intended. This is the Fall ’91 Comdex preview which only supported the x86 architecture and a very short list of hardware devices. The pre-release was available only on CD-ROM and although it was possible to install it more or less manually from DOS, there was a graphical installer on the CD-ROM. 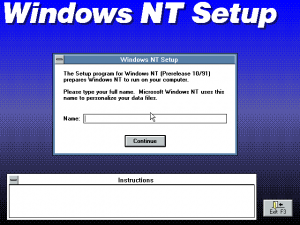 However, the hardware support being as limited as it was, the only supported storage controller was Adaptec AHA-1540 or compatible with a SCSI CD-ROM attached. Fortunately this is adequately emulated by the BusLogic SCSI HBA device in VirtualBox.

Successfully getting through the NT setup isn’t as trivial as it ought to be, so here are a few hints:

If everything is to NT’s satisfaction, the graphical installer will start and present a nice step-by-step installation wizard. It would be interesting to know why Microsoft used a fully graphical install in the pre-release and a partially text-mode installer in the finished product.

The choices are quite limited, and the pre-release nature of this NT version clearly shows—for example in the filesystem selection dialog, FAT is the only available choice. 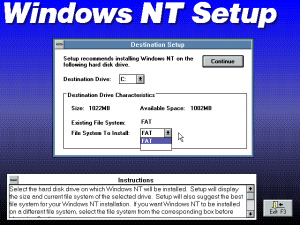 Another sign is the debugging support dialog; while released NT versions supported kernel debugging, debug support was not a user-visible choice in the standard installer user interface and so-called checked build were available separately. 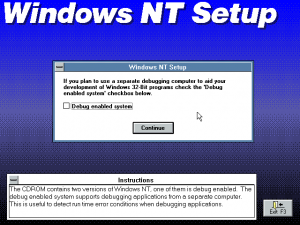 That said, despite the very limited choices, the October 1991 pre-release of Windows NT is a fairly complete system with a GUI and optional networking. The hardware support was extremely limited, but the system was not intended for general consumption. 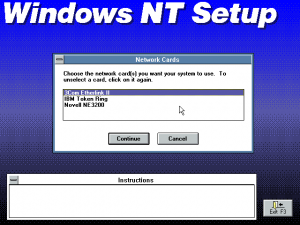 Once the installation completes and the system is rebooted, a familiar user interface is presented: 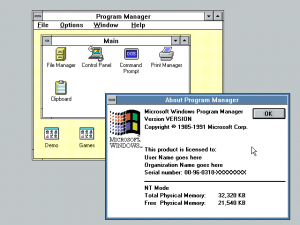 The GUI is a clone of Windows 3.x, with a mix of elements from Windows 3.0 and 3.1 (Windows 3.1 was released approximately half a year after the Oct ’91 NT pre-release).

Curiously, the installation disc also functioned as a kind of a live CD, a concept unheard of in 1991. All it takes is exiting the setup, which lands the user in an empty desktop with an empty Program Manager… from whence it is possible to start CMD.EXE and other programs. Unfortunately the installation CD was clearly not intended for this and the environment (especially PATH) needs to be manually adjusted.

This entry was posted in Microsoft, NT, SCSI. Bookmark the permalink.