How to Void Your Valuable Warranty 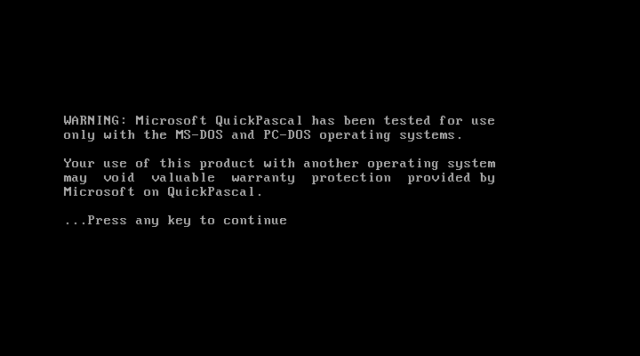 No valuable warranty for you!

What is going on there? It’s a long story…

In 1988, Microsoft became increasingly worried by a new upstart OS from an old rival, DR DOS. Over the years, Digital Research (DRI) had added DOS compatibility to its CP/M-86 based operating systems. Eventually DRI came up with the idea of ditching the CP/M functionality and offering a DOS compatible operating system.

Ordinarily DRI would not stand any chance, but in 1988, the DOS business was not business as usual. IBM took over the development of DOS in 1986 and produced DOS 3.3 and DOS 4.0. Microsoft’s systems group heavily focused on OS/2 and to a lesser extent, Windows 2.x. Microsoft was still licensing MS-DOS to OEMs as before, but there was just a skeleton crew maintaining DOS at Microsoft.

DOS 3.0 was released in 1984, which means that in late 1988, MS-DOS 3.x was getting a little long in the tooth. At the same time DOS 4.0 was not selling well and IBM was slow to fix problems which did not affect IBM hardware. Microsoft had trouble convincing OEMs to license MS-DOS 4.01, and even raised prices of MS-DOS 3.3 to convince OEMs to upgrade.

Microsoft found some OEMs resistant to licensing MS-DOS, a problem that never existed before. DRI was offering ROMable DOS, something Microsoft did not offer at the time. Microsoft could not directly respond but heavily depended on revenue from DOS to finance other projects. Highest echelons of Microsoft’s management were worried:

Aaron Reynolds, a DOS expert and and one of the authors of DOS 3.0, had already examined DR DOS and found that DRI faithfully replicated all documented DOS functionality, and some undocumented too.

About two hours later, Bill Gates got the answer he was looking for, including the following comment:

And that is why the bogus “valuable warranty” message shows up when running Quick Pascal 1.0 setup on DR DOS 3.40.

How does the Genuine DOS detection code work? It relies on a lot of undocumented information which has absolutely no bearing on the operation of Quick Pascal, or indeed any standard user application.

A commented disassembly of the detection routine may be found here. The way it works is as follows:

Note that the code is run with interrupts enabled. That is problematic because some TSR or background task might gain control and try to use the current PSP. That would likely cause problems when the PSP is deliberately set to an invalid value.

The code obviously has no useful purpose per se, it simply checks whether certain completely undocumented aspects irrelevant to Quick Pascal match MS-DOS 3.3 or 4.0. Et voilà, FUD is successfully spread! At least for a while—DR DOS 3.41 released in July 1989 successfully passes the Quick Pascal check and the vaguely threatening message no longer appears.

Several years later Microsoft used the same tactic (with different code, the infamous AARD check) in Windows 3.1. That fact was well publicized and used against Microsoft in later anti-trust trials.

PS: Looking for images of DR DOS 3.3x disks. Their existence is well documented, but survivors appear to be surprisingly rare (unlike DR DOS 3.4x and later releases).

This entry was posted in Digital Research, DOS, Microsoft. Bookmark the permalink.

39 Responses to How to Void Your Valuable Warranty