How Apple Created Hackintosh, Part I

At a developer conference in June 2005, Apple announced that OS X will transition from PowerPC to Intel processors. The first Intel Macs (sometimes nicknamed “Mactels”) were introduced several months later, in January 2006. The announcement generated significant interest in the PC world, and everyone started wondering: Is OS X going to run on my PC? The then-current OS X 10.4 Tiger was in many ways superior to Windows XP, and while Windows ruled the business world, Macs were very strong in the media creation department.

Soon after the conference, Apple shipped custom development systems to interested parties who were willing to pay $999 for the privilege. The systems came with an Intel version of OS X 10.4.1 which refused to run on any standard PC, even though the Apple development systems were extremely close to a vanilla PC. 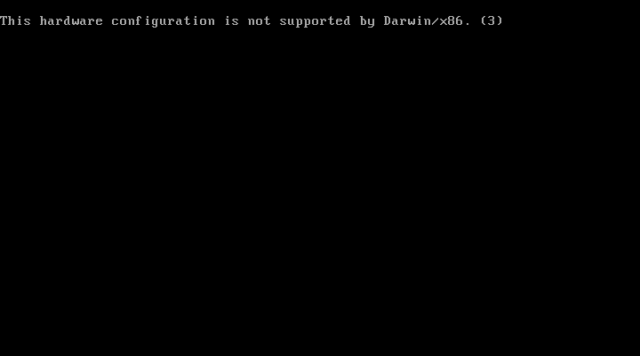 No Intel OS X for you

No later than August 2005 (still months before the official release), the first hacked versions of OS X Tiger for x86 appeared. This in turn spawned an entire strange subterranean cult of Hackintosh, populated largely by people whose time is worth very little and who put a lot of effort into creating an entirely untested and unsupported system.

But how did Hackintosh appear on the scene so quickly? The person most responsible for that was none other than Steve Jobs, and to understand why, we have to rewind another 20 years back.

In 1985, Steve Jobs left Apple (how much that was voluntary not is a matter of perspective). Later that year, Jobs founded NeXT (later NeXT Computer), a maker of hip workstations and a very unusual operating system called NeXTSTEP. Initially NeXTSTEP only supported NeXT’s own 68000-based workstation launched in 1988, the NeXTcube. In the early 1990s, NeXTSTEP was ported to SPARC, HP PA-RISC, and Intel’s x86 architecture.

While not an Apple product, NeXTSTEP was in many ways an embodiment of Apple’s “Think Different” mantra. The Mach microkernel was combined with much of BSD kernel and userland, with a very modern, object-oriented programming interface based on Objective-C (when NeXTSTEP was developed, C++ wasn’t mature; Apple also funded the addition of the Objective-C front end to GCC). NeXTSTEP became popular with developers because it enabled rapid development of complex software. Notable developed-on-NeXT software includes HTML/WWW and DOOM.

By about 1994, NeXTSTEP ran on many generic PCs. In 1995, NeXTSTEP turned into OpenStep, without much change in the underlying OS. In February 1997, Apple acquired NeXT (and Steve Jobs) due to a desperate need for an OS more modern than the classic Mac OS, which was rather similar to Windows 3.x in far too many ways. 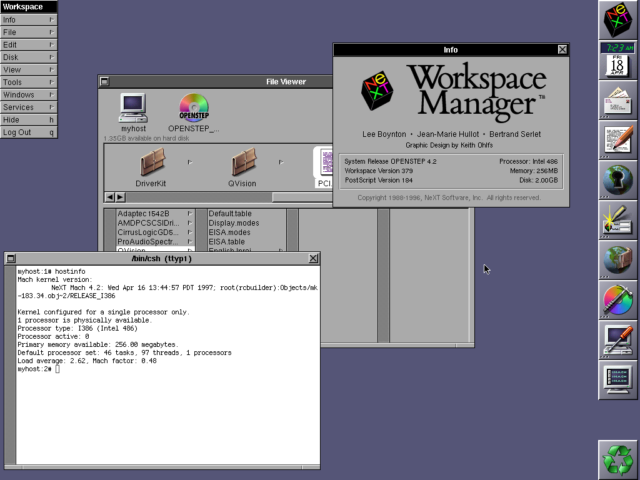 Apple got to work and in 1997/1998, released developer versions of Rhapsody OS, essentially an Apple-ized NeXTSTEP. For many years, Rhapsody DR2 (Developer Release 2) from 1998 was the last Apple desktop OS which ran on x86. 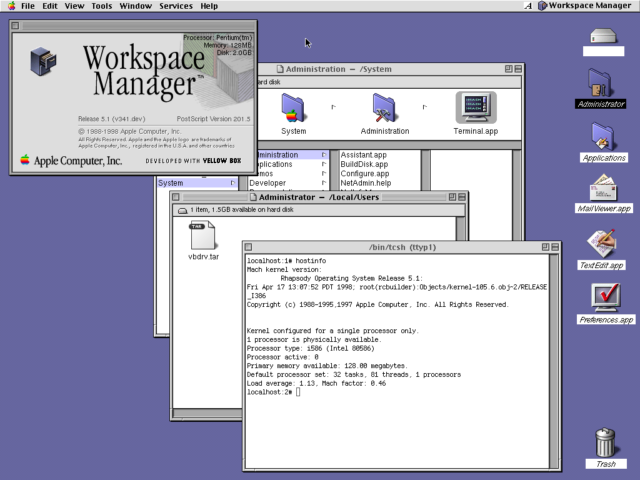 By the time Rhapsody turned into OS X and was released first as Mac OS X Server 1.0 (1999) and Mac OS X 10.0 Cheetah (2001), only PowerPC Macs were supported. Except not really. All through the early 2000s, Apple supported a mostly-open-source project called Darwin. This was essentially OS X without the Apple GUI and applications. And Darwin did support x86 all along—including AMD and VIA processors.

There are mythical stories about how one man ported OS X to PCs, but they’re just that, stories. The OS started as a cross-platform one (with last release in 1998, see above), and Apple maintained the x86 support in Darwin all along. The only mystery is why anyone would be surprised by Apple switching to Intel despite the rumors of Project Marklar going back to 2002 and the obvious evidence of Darwin x86 support which was right on Apple’s web site staring everyone in the eye.

As of November 2017, Apple still provides the last Darwin 8.0.1 bootable ISO if one knows where to look (and here are the release notes). This is a stripped down OS X 10.4 Tiger which runs on generic PCs (there’s a version for PowerPC Macs, too). Among other things, Darwin contains a BIOS boot loader which can start the xnu kernel from a HFS+ partition (and Apple provides the source code, too). 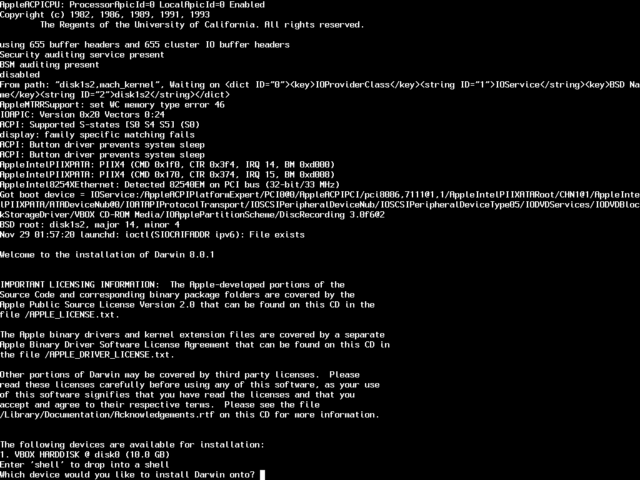 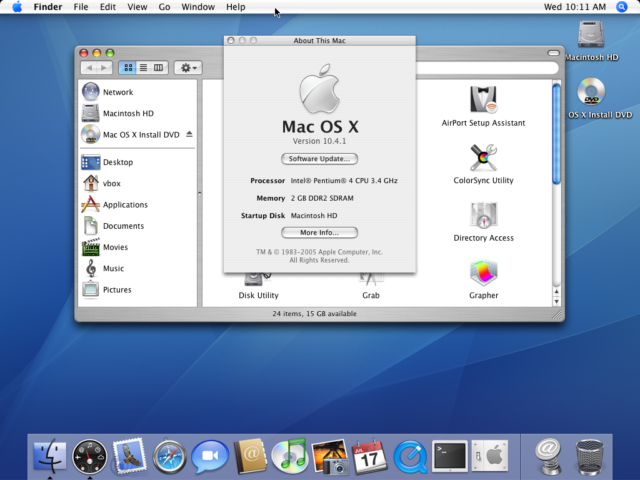 It is obvious that if Apple shipped the first Intel OS X release to developers in June 2005 and Intel Macs were released in January 2006, the Intel version of OS X was quite far along by the time anyone outside Apple saw it. Certainly it does not feel like a 1.0 release—the PowerPC edition of OS X had been in wide use for four years by then, the OS had internally been running on Intel for a while, and for the transition period, Apple provided Rosetta, a dynamic PowerPC to x86 application translator.

As mentioned at the beginning of this article, the developer version of OS X 10.4.1 (and 10.4.3 in the Fall of 2005) did not run on standard PCs, even though the DTS was 99% a standard PC. For the most part it was because Apple simply didn’t care about hardware that Apple didn’t ship, but there was an added “safety” to ensure that OS X wouldn’t run on non-Apple PCs. But of course the 99% part was crucial and that’s why it only took a few weeks for Hackintosh to show up. More about that in Part II.

This entry was posted in Apple, Intel, PC history, Pre-release. Bookmark the permalink.

10 Responses to How Apple Created Hackintosh, Part I