A few weeks ago I needed a 3Com 3C589 PCMCIA network card to run Solaris on a ThinkPad Power Series 850. The Solaris PowerPC HCL only listed 3C589 and 3C589B as supported models (and no other network adapters were listed at all), so I went looking for one of those old cards.

Of course eBay was full of newer 3C589D and 3C589E (Megahertz) variants, but I wasn’t sure those would work with Solaris. In the end I found a 3C589B with manual, driver floppy, and whopping two dongles. What could possibly go wrong?

Once the package arrived, I discovered that while the PMCIA adapter appeared to be working fine, neither of the dongles did. It was possible to plug the dongles into the card and some LEDs might blink, but no link was ever detected. Both dongles were also suspiciously loose. The short story was that while Solaris detected and initialized the card just fine, I was no closer to having a functioning network connection.

Slightly desperate, I bought a 3Com Megahertz 10Mbps PC Card, also known as 3C589E. Mine was the 3CX589EC model with a dongle port plus a combo TP/BNC dongle, but also with a XJACK connector, meaning that the dongle was not required. Interestingly, the dongles that had been shipped with the 3C589B appeared to work fine with the 3C589E, although I found the XJACK more convenient anyway.

Luckily Solaris for PowerPC didn’t mind the newer model (good job 3Com!) and I was finally able to get the exotic OS onto a LAN. But what of the old 3C589B?

After a lot of Googling around, I discovered that the 3C589B cards used different, totally incompatible dongles. This distinction appears to be lost on just about everyone selling 3Com PC Cards or dongles. Visually the dongles are very easy to distinguish. Older dongle on the left, newer on the right: 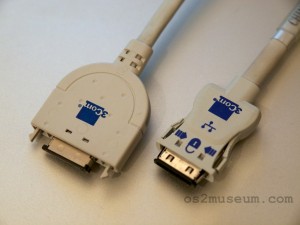 Armed with this new information, I searched for the right kind of dongle that would fit a 3C589B. I found one, and promptly ordered it. When it arrived, I discovered that I had been foiled again: This time the dongle fit the network card… but not my network. It was a coax (10Base-2) dongle, not a “combo” coax/twisted pair dongle as I had mistakenly assumed. Thanks, 3Com…

My wallet is now a little lighter and I am a little wiser: Network dongles are a curse. Everyone hated them back in the day for a good reason, and thank goodness they died out!

This entry was posted in Networking, PC hardware. Bookmark the permalink.