Didn’t Expect That to Work

Once the ThinkPad T43p with a bad fan was in working shape again, I restored the preloaded software on it. Which meant Windows XP (this is a system from 2005).

It didn’t take long for me to establish that XP is really hard to use these days. Even Firefox doesn’t support it. Getting any kind of halfway modern software running on XP is simply a no go. After reading about fairly good experience with installing Windows 7 on T43/T43p, I decided to go the same route.

I happened to have a burned DVD with Windows 7 Ultimate lying around, so I tried that. After installation, there was no WiFi, but there was wired Ethernet—good enough. Windows Update successfully installed drivers for WiFi, graphics, and a number of other devices. The rest (power management, fingerprint software, hotkey OSD) I grabbed from Lenovo.

Well, that still didn’t help me because there’s no license that can be downgraded to Windows 7 Ultimate. After a bit of searching I found a Windows 7 Ultimate offered for mere 28.99 Euro on lizengo. After reading a few horror stories about that and similar sites, I had serious doubts that it would work, but thought I’d give it a try.

To my great surprise, a license key arrived via e-mail within a few business hours and Microsoft actually accepted it, successfully activating my Windows 7 Ultimate install. 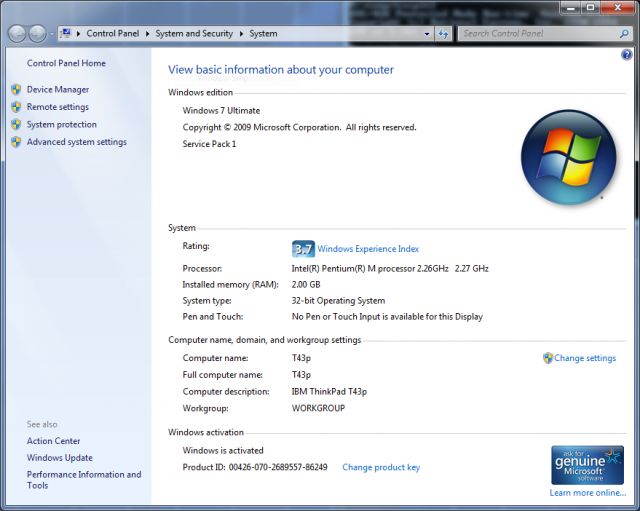 Posted from a ThinkPad T43p

This entry was posted in ThinkPad, Windows. Bookmark the permalink.

22 Responses to Didn’t Expect That to Work