By sheer coincidence, three different yet similar wavetable daughterboards landed on my desk. They’re of different ages but all use Dream synthesizer chips. Together they provide an interesting window into the evolution of MIDI synthesizers. 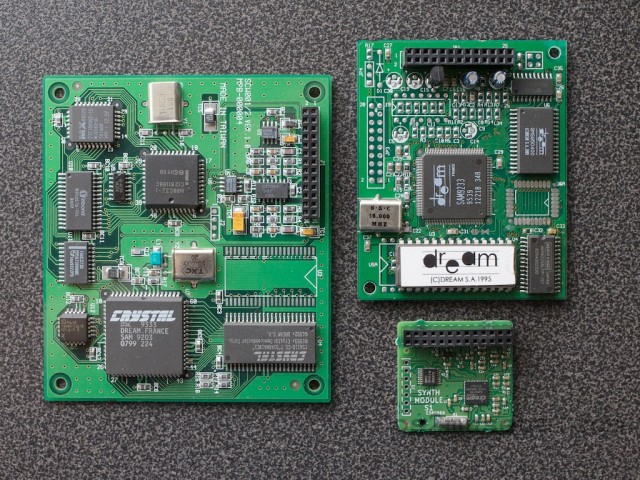 The oldest daughterboard is from mid-1994 and was likely sold under the TerraTec WaveSystem brand. It uses the SAM9203 synthesizer chip. The middle-aged board is from late 1994 and uses the widespread SAM9233 synth chip. It was sold as Hizon DB333 and under other names. The newest of the bunch is significantly more modern—a Dreamblaster S1 from 2014 using a SAM2195 all-in-one chip.

The SAM9203 is a relatively dumb chip. It’s essentially a hardware mixer and envelope generator/processor. It’s a fully digital chip with no analog section.

32-note polyphony is supported, meaning that up to 32 notes can be played at any one time. It’s worth mentioning that the SAM9203 (and its successors) supports “traditional” digital synthesis based on modulating sine waves, in addition to sample-based synthesis.

The chip as such has no understanding of MIDI; it reads instrument definitions (envelopes and waveforms) from memory (ROM) and mixes them together as directed by a processor. 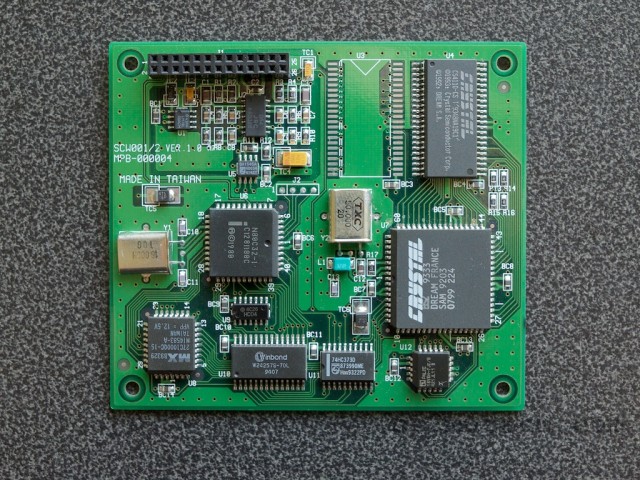 In this case, the processor is an Intel N80C32, a MCS-51 family microcontroller (MCU). The microcontroller has its own firmware on a separate chip. The MCU processes incoming MIDI data and converts it into commands for the SAM9203 synthesizer. The synth has a small external SRAM and reads instrument data from a relatively large 2MB ROM, here a Crystal Semiconductor CS4110.

Because the synthesizer only provides digital output and the WaveBlaster connector uses analog audio, a Philips TDA1545A DAC is used for the necessary conversion. The board uses two separate oscillators, one 50 MHz (for the synth chip) and one 16 MHz (for the MCU).

All in all, there’s a lot of discrete parts which together form a mediocre MIDI synth (the lack of any effects is a big minus.

The newer board is much smaller because the SAM9233 integrates significantly more functionality. The biggest difference is the inclusion of a MCU equivalent, albeit with a separate firmware ROM (the large chip with a white sticker). 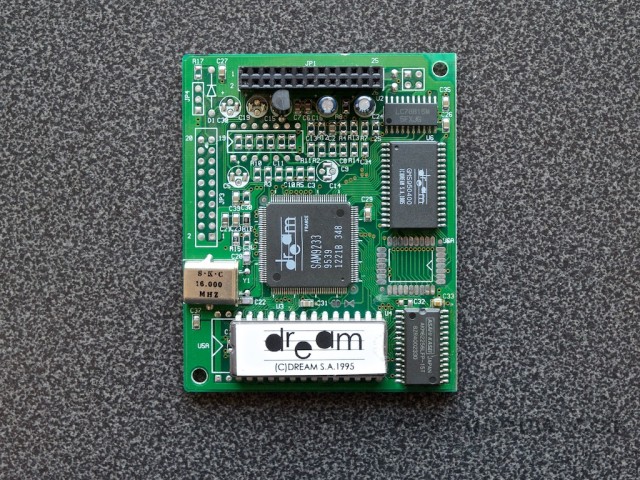 Compared to its predecessor, the SAM9233 isn’t all that different in terms of synthesis capabilities (32-note polyphony, no effects). The ROM is compressed, which is why it’s much smaller with comparable quality as the older CS4110.

The evolution of nearly two decades is painfully obvious, and the size difference is the most striking. While the old 1994 daughterboard is a relatively substantial piece of hardware, the Dreamblaster S1 is only as big as it is because of the WaveBlaster connector (which now looks huge in comparison). 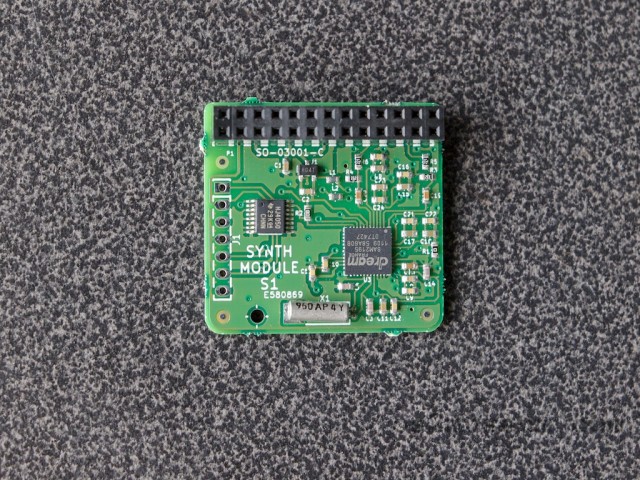 The SAM2195 itself is tiny, yet it is a complete MIDI synthesizer on a chip. Apart from the synth chip, there’s only a 9.6 MHz oscillator and a voltage level converter.

In other words, the SAM2195 integrates a MCU, firmware, RAM, instrument ROM, and a DAC. That actually massively reduces the number of pins because there is no need for parallel data paths to ROMs or RAMs. The synth essentially takes MIDI data as input and produces analog output, with no external discrete logic whatsoever.

It’s fascinating to see how far IC integration and manufacturing processes have progressed even in a device of comparatively modest complexity. What required a pile of discrete chips and considerable power 20 years ago only needs a single chip and tiny power budget.

Stacking the daughterboards on top of each other makes it obvious how much smaller the chips have gotten: 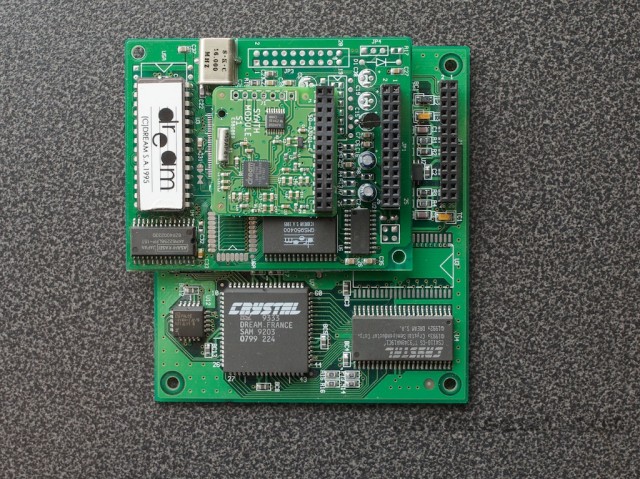 The single SAM2195 chip does more than the complete older daughterboards.

This entry was posted in MIDI, Sound. Bookmark the permalink.

2 Responses to The Vanishing Dream