While pondering the DXP44Q mystery again, I realized that one of my sound cards most likely could be equipped with a DXP44Q. Here’s the card: 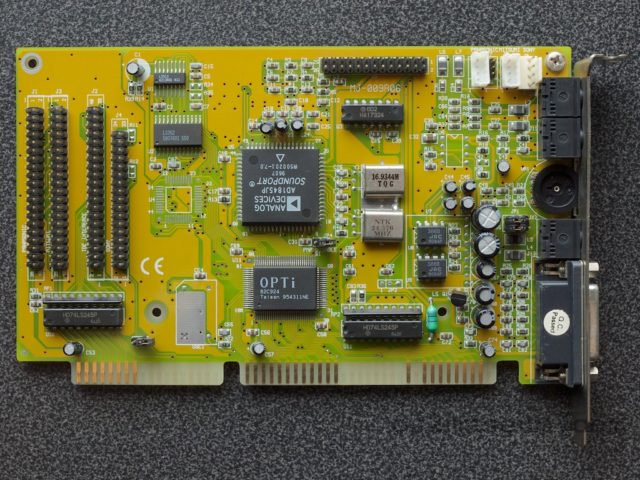 It’s a pretty standard Sound Blaster clone. Note that the OPTi 924 chips is only a “controller” with no DACs or ADCs, hence there is a separate AD1845 SoundPort codec. So where would a DXP44Q go? 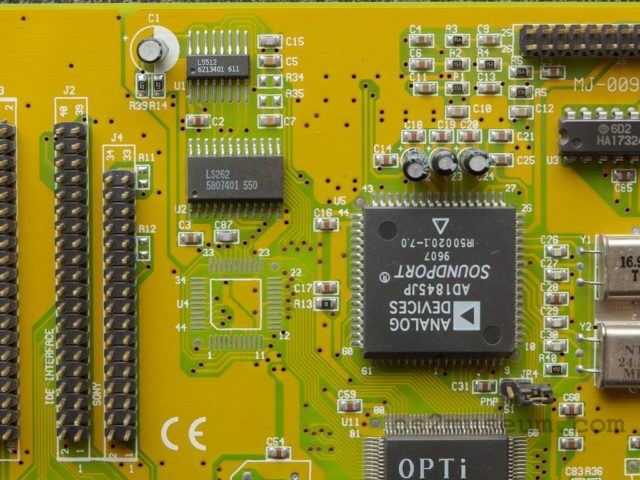 Close-up of the OPL and codec

See that unpopulated U4 location? There’s space for a 44-pin chip. What are the odds that it’s something other than DXP44Q? Rather low in my opinion. Incidentally, the ’44Q’ in DXP44Q almost certainly stands for 44-pin Quad (Flat Pack).

The XD[7:0] pins of the 924 controller are clearly connected to the U4 location. That is the FM chip data bus. That means the chip in that location implements OPL3 functionality. On this card, there is no built-in DAC for the OPL3 chip (the LS512 chip is the DAC).

Further searching also turned up a Pine Tech PT-201 card, some variants of which contained an ESS ES688FZ chip with built-on OPL3 functionality—but other variants of the PT-201 came with an older ES688 model with no OPL3 and with a DXP44Q chip. Again, there was no external DAC, although the ES688 would need one.

To sum up: There is circumstantial evidence that the DXP44Q included both the OPL3 and its DAC. That is why it came in a different package which did not directly replace any Yamaha part, unlike all the other known OPL3 copies. The DXP44Q was only used for a brief period of time before typical sound card controllers (Crystal, OPTi, ESS, ALi) all had built-in OPL3 compatibility.

4 Responses to More on DXP44Q