Several months ago, I retook possession of a PC which I had built back in 2003 (I think—it’s been a while). It is based on an Intel D865PERL (Rock Lake) board and a Northwood 3.2 GHz Pentium 4 with hyper-threading (HT). I newly upgraded the machine to 4 GB DDR400 RAM, something I didn’t want to invest in back in 2003 but is affordable now.

Unfortunately the system had serious trouble with graphics. The machine was equipped with an ATI Radeon 9700 Pro (R300), a card I got as a freebie at an ATI event in San Francisco back in 2002 or so. The card served me very well for years (until it was replaced by a Radeon 1950 XT in a completely new system), but now it just tended to lock up a lot. Closer inspection revealed that at least one of the RAM chips on the card is almost certainly loose, which is not that easy for me to fix (BGA chips). 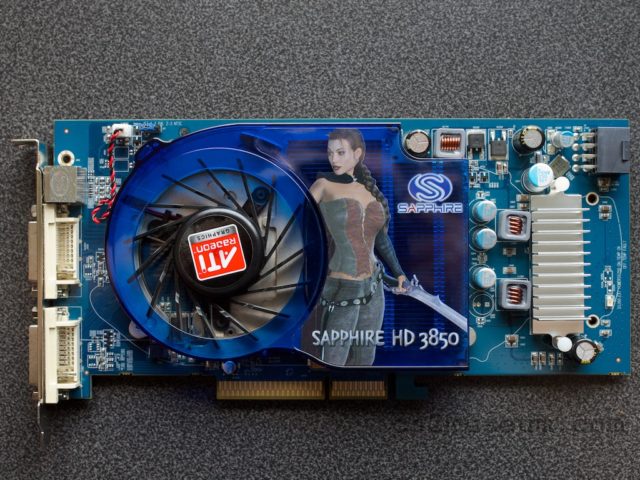 The Intel 865 chipset is more or less the pinnacle of Intel’s AGP support, with AGP 8x capability. The next chipset, the Intel 915, was already based on PCI Express. On the other hand, the Radeon 9700 Pro is old enough that it works even in older AGP 2x systems.

As an intermediate solution, I stuffed a fan-less Radeon HD 3450 into the system. That took care of the stability, but I wasn’t very happy with performance. I didn’t do direct benchmarks but the card seemed slower than the old Radeon 9700 Pro. Part of the problem was that years ago, I used an analog CRT and ran games in 1024×768 resolution. Now the system has a 1600×1200 IPS LCD hooked up, and that more than doubles the number of pixels the GPU needs to push.

My test case was Half-Life 2. It’s a 2004 game (yes, that old!) and the 3.2 GHz Pentium 4 is a perfectly adequate CPU for it. But the HD 3450 graphics card was not. The game ran okay with reduced settings, but turning on the flashlight or encountering smoke brought the frame rate down to almost nothing.

Replacing the graphics card with something faster should take care of the slowdowns. But what to replace it with, that’s the question.

So what’s the fastest AGP graphics card? The consensus seems to be that it’s not an Nvidia. It’s either a Radeon HD 3850 or a Radeon HD 4670. The comparison between these two is interesting (see data on Wikipedia).

The HD 3850 (RV670 PRO chip) was introduced in November 2007. The HD 3000 series was the last one where the high-end models existed in both AGP and PCIe variants (except for the exotic two-chip models which were PCIe only). The Radeon 3850 AGP cards (Sapphire, PowerColor) come with 512 MB GDDR3 memory and use a 256-bit memory interface. The TDP is 75W. 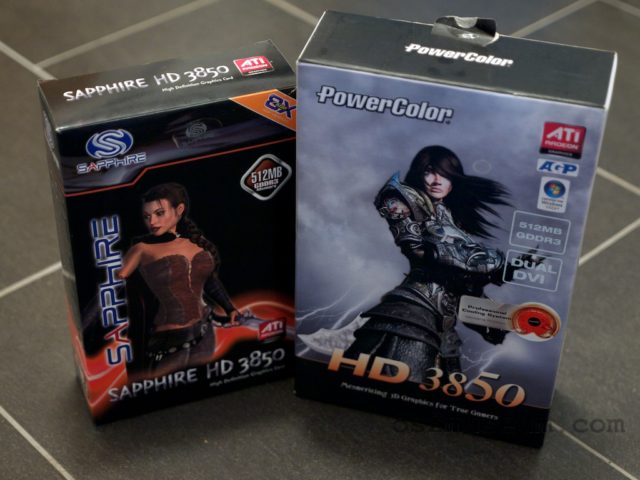 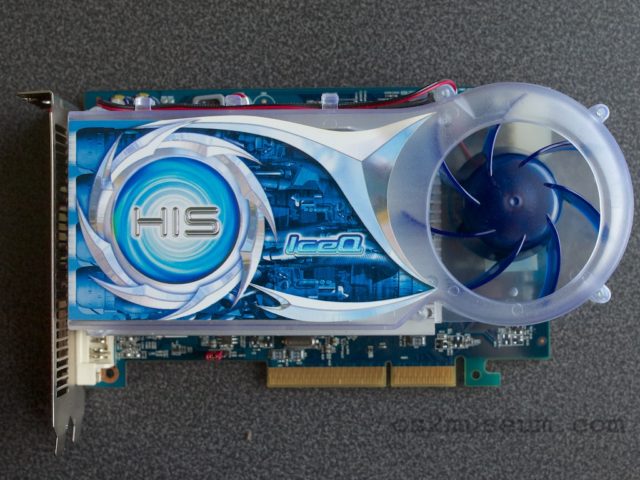 In short, it’s an older high-end card vs. a newer mid-range card. As it turns out, there’s very little difference in benchmarks. The HD 3850 may be slightly faster… or not. As these graphs show (text in German but the numbers should be clear), either a HD 3850 or a HD 4670 is faster, depending on the resolution and anti-aliasing settings.

The performance differential is not significant and the 4670 is newer, quieter, more energy efficient, and usually cheaper. So, for most practical purposes, let’s say the Radeon HD 4670 is the best AGP graphics card, with the HD 3850 being very very close.

Now that we have identified the fastest AGP card, more or less, the obvious follow up question is: What’s the fastest AGP motherboard? And the answer is not straightforward.

On the Intel side of things, the 865G or 865PE (or 875P) chipset is basically all there is. My old D865PERL is close to the fastest AGP motherboard sold by Intel (though see below). It is a Socket 478 platform which severely limits the CPU performance.

But there’s Intel and there are crazy Taiwanese board manufacturers. Someone realized that the 865 chipset can a) be used with the LGA775 socket, and b) can support Core 2 Duo and possibly even Core 2 Quad processors, and c) can be more or less reliably overclocked to 1066 MHz FSB (minus graphics in the 865G case).

Examples of this are the ASRock ConRoe865PE or ASUS P5PE-VM. Most such boards, with the exception of the ConRoe865PE, are limited in that they only have two memory slots and are hence cannot support more than 2 GB RAM. However, even (say) a 2.6 GHz Core 2 Duo with 800 MHz FSB (no overclocking) massively outperforms any Pentium 4 processor. And these boards should be able to support approximately 3 GHz Core 2 CPUs.

If we abandon Intel chipsets but not CPUs, there’s the ASRock 775Dual-VSTA based on the VIA PT880 chipset. I’ve never been a fan of VIA but the board supports AGP together with Core 2 processors and DDR2 RAM. It unfortunately does not support the faster Core 2 models with 1333 MHz FSB (it stops at 1066 MHz).

Things get more interesting if we go with completely non-Intel solutions. For example the ASRock AM2NF3-VSTA board is built around the Nvidia nForce3 chipset and supports DDR2 memory with up to 16 GB RAM, and according to ASRock, can use AMD Phenom II X4 processors up to 3.5 GHz. That should be a significantly more modern and faster platform than anything based on the Intel 865 chipset. The big downside of the nForce chipset is poor AGP support in newer Windows versions, especially 64-bit.

Based on my research, I currently believe that the AM2NF3-VSTA should be the fastest AGP board, but I have not put that to the test (since I don’t have one) and it is possible that there are others out there.

Over the last few days I had a chance to try the AGP Radeon HD 4670 in an Intel D875PBZ (Bonanza) board. That’s a close relative of my old D865PERL, using the higher-end (but nearly identical) 875P Canterwood chipset. 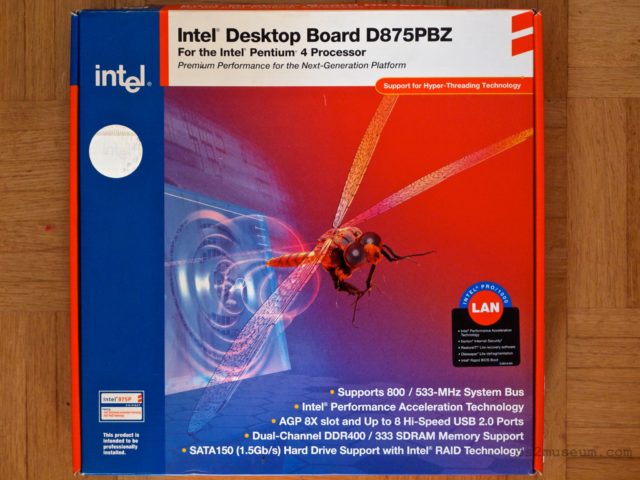 It is very obvious that the graphics card is not the weak point of the system. The problem is essentially that Intel ditched AGP together with Socket 478, and the Socket 478 platform is far too limiting. Aside from the very exotic Extreme Edition CPUs, the best Socket 478 CPU is a 3.4 GHz Prescott Pentium 4 with 1 MB L2 cache (doubled from Northwood’s 512 KB), and with 16 KB L1 cache (doubled from Northwood’s 8 KB). And like other NetBurst processors, it’s just Intel’s way of demonstrating that clock speed isn’t everything.

That is on the whole not very surprising given that the last Intel Socket 478 boards are from 2003 and the HD 4670 is from 2008, full five years newer. The takeaway is that Intel killed AGP quite a bit before its reached the end of its useful life.

This entry was posted in AGP, Pentium 4. Bookmark the permalink.

27 Responses to Fun with AGP