The Pentium II OverDrive, released in August 1998, was the swan song of the OverDrive product line. It is suitable for Socket 8 systems as an upgrade of 150-200 MHz Pentium Pro processors. Only one model was sold with a PODP66X333 designation. The Pentium II OverDrive upgrades a Pentium Pro system with 66 MHz bus to a 333 MHz Pentium II, or a 60 MHz bus system to a 300 MHz processor. In other words, the processor uses a fixed 5× multiplier.

To understand the Pentium II OverDrive design, it is necessary to understand the Intel CPU history of the mid-1990s. The Pentium Pro (P6) was a high-end CPU which started an incredibly long line of processors and effectively killed all RISC competition. But the Pentium Pro was never a mass-market processor. It contained 256K, 512K, and later even 1M of built-in L2 cache running at core CPU speed (up to 200 MHz). It was very large and difficult to manufacture, and therefore expensive. It was also highly popular in server systems because it natively supported 4-way SMP and the fast, large L2 cache was very suitable for server and workstation workloads. 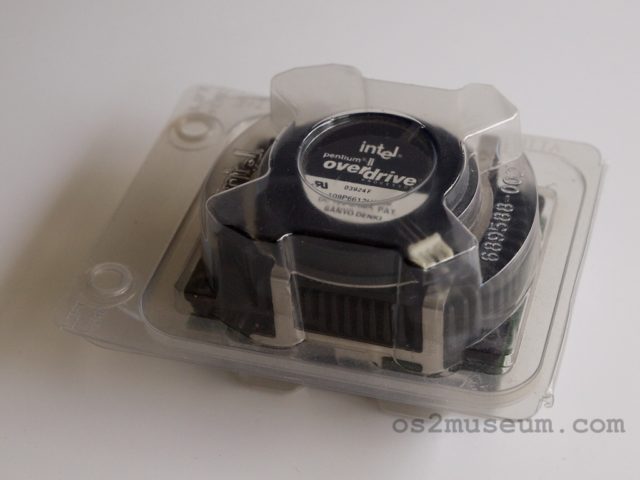 The Pentium Pro was also well known to have performance problems with 16-bit code, such as the code found in Windows 95/98, and did not support the MMX instruction set. For mass-market PCs, the Pentium MMX was replaced by the Pentium II, which was a modified Pentium Pro with MMX support, improved 16-bit code execution performance, clock speeds starting at 233 MHz, but L2 cache running at only half the CPU clock speed.

The Pentium II was not suitable for servers as a successor to the Pentium Pro. That is why Intel developed the Pentium II Xeon, a processor with Pentium II core but 512K, 1M, or even 2M built-in L2 cache.

The Pentium II OverDrive is essentially a Pentium II Xeon in a Socket 8 package, with a fixed 5× multiplier and 60 or 66 MHz bus. It would be an excellent replacement for a 200 MHz Pentium Pro with 512K L2 cache; it keeps the large and fast cache, adds MMX, and increases clock speed to 333 MHz. For slower Pentium Pro systems, the benefit would have been even greater.

Double the OverDrive, double the fun.

In other words, when it was introduced, the Pentium II OverDrive was not as fast as the standard offerings and very quickly fell far behind, with no faster OverDrives available. At the same time it wasn’t particularly cheap. As a result, those seeking top performance (and buyers of Pentium Pro systems certainly did) were better served by purchasing a more modern system with newer and faster chipset, AGP support, 100 MHz bus, SDRAM, and a faster CPU.

All these factors probably led Intel to give up on the OverDrive line entirely, especially given the non-trivial engineering effort. The promise of upgradability never seemed to have quite panned out (except for the first 486 OverDrive CPUs). In addition, now that Intel was also firmly in the chipset business, selling a new CPU together with a new board (i.e. new chipset) probably sounded like a better idea anyway. It also didn’t require any custom engineering and special marketing for relatively low-volume processors.

The CPUID TFMS (Type/Family/Model/Stepping) of the PODP66X333 is 1632h. That would indicate the original Klamath Pentium II but the OverDrive has a newer Deschutes core. Why the mismatch? The explanation is very simple: When the Pentium Pro was released, Intel specified an OverDriver processor with 163x CPUID so that BIOSes could easily recognize the upgrade CPU. By the time the Pentium II OverDrive was actually released, the CPUID (family 6, model 3) no longer matched reality, but had to be kept so as to not confuse existing BIOSes. 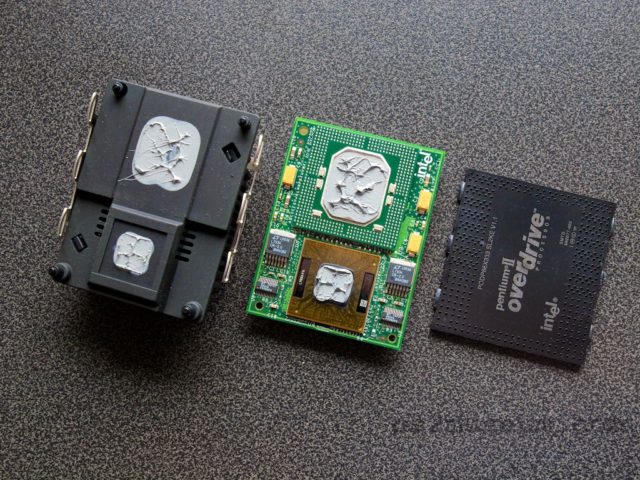 Another historical curiosity is that Intel specified a VRM (Voltage Regulator Module) socket for the Socket 8 OverDrive processor, but actual units shipped with an onboard VRM.

The fast L2 cache was designed to reduce the impact of relatively slow main memory in Socket 8 systems. Intel had previously used a similar approach with the original Pentium OverDrive which sported twice the size of the L1 cache of standard Pentium processors.

In general, the Pentium II OverDrive performance is somewhere in the Pentium II 300 to 333 MHz range, but in a previous-generation platform. That means no SDRAM, no AGP, though at least the standard 440FX chipset supports up to 1GB RAM.

For number crunching, the OverDrive is great. But it won’t speed up graphics performance much (unless MMX makes a big difference in a particular application). The pure CPU performance of a Pentium II OverDrive is significantly better than that of a 200 MHz Pentium Pro, and the differential is even greater when replacing, say, a 166 MHz Pentium Pro. But it won’t speed up I/O such as slow disks and graphics cards. That’s of course true of OverDrives in general. There was talk about the Pentium II OverDrive being a “home made Xeon“. That was not exactly wrong, but the problem was that the OverDrive didn’t work in any modern (at the time, i.e. late 1998) platform, which eliminated a good deal of the fast L2 cache advantage.

Since there are no other alternatives, there’s no question that a Pentium II OverDrive is the best thing for a Socket 8 system, including machines with more than two sockets (even though Intel only guaranteed dual processor operation).

Largely due to the classic too little, too late problem, the Pentium II OverDrive was not a particularly successful product. In about 1999 it concluded the line of Intel OverDrive processors which had started with a great fanfare in 1992.

This entry was posted in Intel, Pentium II, Pentium Pro. Bookmark the permalink.