Posted on November 6, 2015 by Michal Necasek

After establishing that Trident VGA cards are indeed very slow, the natural follow-up question is: Are there cards even slower than that? But not some 8-bit VGA card from the 1980s (or a Realtek from the 1990s), and not some exotic CAD accelerator, but rather some mainstream 16-bit ISA graphics card.

Those who remember the latter days of ISA graphics cards may guess the “winner”: Early S3 graphics accelerators! Such as this one: 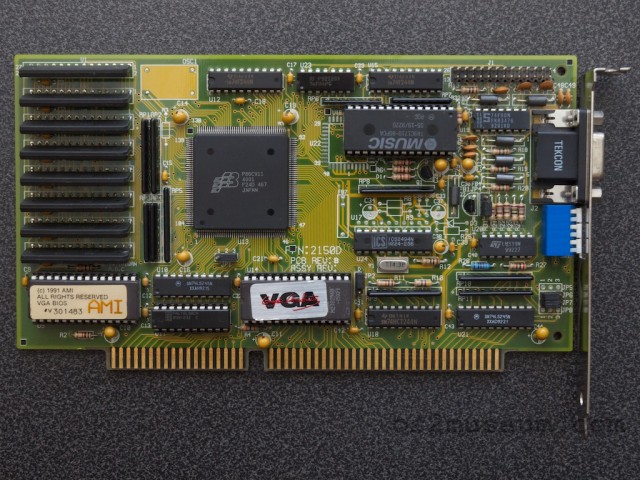 This specimen from mid-1992 was not a cheap card, but it was popular. It was a graphics accelerator with 1MB VRAM (not DRAM) and an 80 MHz DAC. The S3 86C911 chip kicked off a very successful line of graphics adapters.

Yet the VGA performance of this card is… well, terrible:

The card is clearly operating in 16-bit mode and 8-bit transfers are even slower. The VGA performance is just uniformly awful. These cards weren’t sold for VGA performance but compare poorly in this regard with similar offerings from e.g. ATI (mach8 and mach32 accelerators).

The VGA performance is clearly worse than the horrid Tridents, although the Tridents have no accelerator as a redeeming feature.

A very similar card with updated S3 924 chip is faster, or rather slightly less glacial:

The cards do sport an array of jumpers, as usual poorly documented. This appears to be a good match. Unfortunately changing the jumper settings had absolutely no discernible effect.

So how about the VGA performance of truly exotic cards? How about a Radius MultiView XGA (yes, that’s an ISA card): 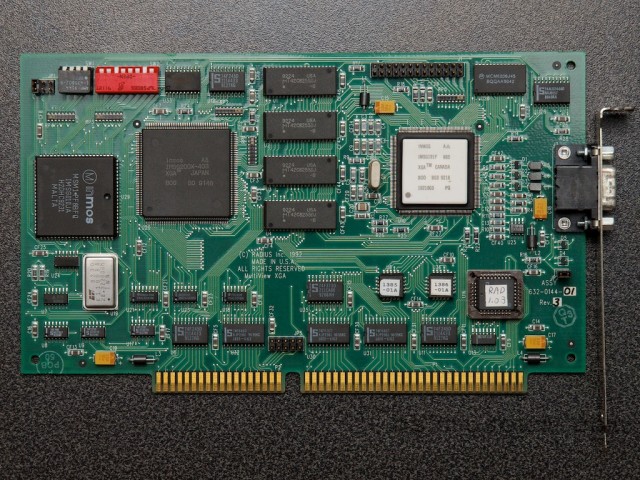 This card, other than being an XGA implementation (not a clone; Inmos manufactured the XGA chips under a license from IBM), was notable for supporting multiple accelerators in a single system. Once again, it was not sold for its VGA performance, and it shows:

It’s much better than the contemporary S3 911/924, but noticeably worse than ATI accelerators, leave alone the fastest ISA VGAs.

So are there any other fast cards? Yes, and again they’re Cirrus Logic chips. A card with the CL-GD5402 chip is an AVGA2 with Cirrus Logic branding. Performance is identical to that of an AVGA2 card as expected.

A newer CL-GD5422 based card was also tested. This was a continuation of the AVGA line produced after Acumos had been acquired by Cirrus Logic. 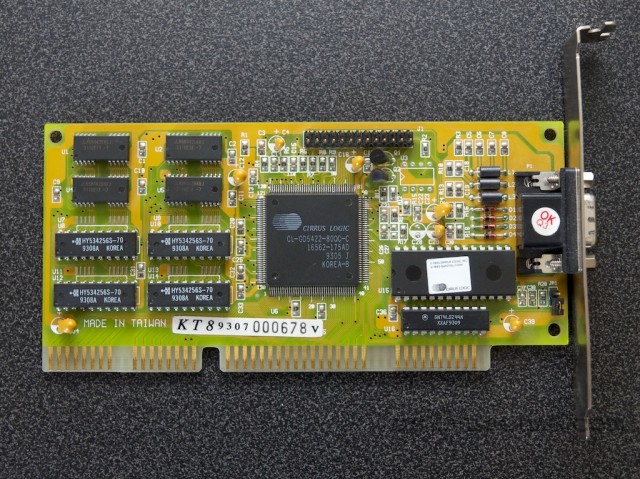 Here are two sets of benchmark results for this card:

The JP1 switch is not labeled but presumably selects 0WS (zero wait state) operation when closed, similar to this card. At 0WS, the CL-GD5422 card is slightly faster than the AVGA2 (2.9 MB/s chained VGA reads vs. 2.7 MB/s) and edges slightly ahead of Diamond SpeedStar cards in DOOM performance (but not VGA read speed).

This is a solid card but remember, it depends on the ISA OSC signal and might not work reliably in every motherboard.

So what have we learned? The VGA performance of a card is in no way proportional to its price. But it’s not inversely proportional either—some cheap cards are excellent (AVGA/Cirrus Logic) and others are absolute dogs (Trident, Realtek).

The two families so far identified as having excellent VGA performance are the Tseng ET4000AX and the Acumos AVGA2/Cirrus Logic chips. Both are relatively basic ISA SVGA cards but their VGA performance is hard to beat.

The caveat is that not every card with those chips is fast. In the Acumos/Cirrus Logic case, wait state settings make a big difference. In the ET4000 case, the amount and type of memory on the card makes a difference (cards with more RAM are generally faster).

And finally, some VGA cards are incredibly slow without being “broken”.

This entry was posted in Cirrus Logic, IBM, S3, VGA. Bookmark the permalink.