About Those Trident VGAs…

An earlier post mentioned that the performance of Trident-based ISA VGA cards leaves much to be desired. A reader pointed out that such cards tend to have switchable 8-bit/16-bit bus width and performance might suffer if the card is incorrectly jumpered.

After examining two different Trident cards in detail, it is clear that yes, those jumpers exist… but the Trident-based cards are so bad that it doesn’t matter anyway.

The first card was this: 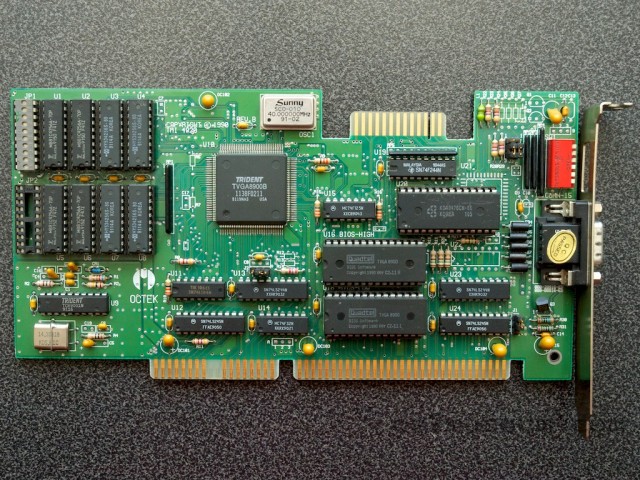 This card has several jumpers on the PCB, as well as a block of 6 DIP switches accessible from the rear of a system. Figuring out what the switches do is of course not so simple.

The closest description I could find is this; it’s not an exact match because there’s no TTL connector here, but the layout and jumper positions correspond very closely. This one also closely matches. It’s obvious that all these cards shared the same basic design.

So DIP switch SW6 controls bus width. Unfortunately the documentation says ‘on’ and ‘off’ while the actual switch is labeled ‘open’ and ‘closed’. The ‘on’ position should correspond to ‘closed’ and SW6 was already in the open/off position which should select 16-bit bus width, a reasonable setting for a 16-bit card. Here are the benchmark results reflecting the card’s initial configuration:

What’s not shown above is that Vidspeed lists the bandwidth figures for 8-bit, 16-bit, and 32-bit memory accesses (only the 32-bit figures are shown above). The numbers were all very close which strongly indicates 8-bit operation—a 16-bit card should show significantly higher performance when using 16-bit vs. 8-bit accesses.

So what happens if SW6 is toggled? Well, something did happen! Here are the new results:

The Vidspeed VGA numbers almost doubled, and the 3DBench score went up a lot. But… the MODEX numbers didn’t budge, and neither did DOOM. What’s going on?

While the switch does make a difference for chained VGA modes (mode 13h and hence 3DBench), it has zero impact on Mode X and therefore on DOOM. Why the initial switch position didn’t already select 16-bit operation as the documentation (and common sense) suggests is anyone’s guess. Why chained performance is improved but planar isn’t is another mystery.

With these improved numbers, the TVGA8900B would still do very poorly compared to the other cards, and especially the DOOM figures are the abysmal. Can anyone do worse?

Why yes. This card: 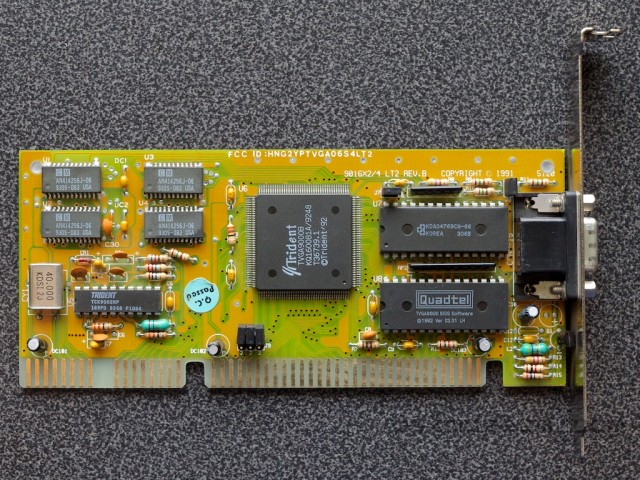 Once again, finding documentation isn’t trivial. This card looks like a very good match. And so does this one. This time around there are not as many jumpers. Again the initial configuration should be 16-bit. And again the benchmark numbers indicate that the card behaves like an 8-bit device performance-wise, despite supposed 16-bit operation.

The performance is more or less identical to the 8900B in its initial configuration, only DOOM is slightly slower.

The upshot is that the newer 9000B card is even slower than the old 8900B, and the 8900B is nothing to write home about. It’s hard to see why anyone would want to use one of these cards when there’s an abundance of better alternatives.

Seeing how awful the performance of these cards is compared to the good ones (1.3 vs. 5.5 MB/s bandwidth), one might suppose that the Tridents were by far the slowest ISA VGA cards on the market in the 1990s. Surprisingly enough, that’s not the case. More about the real slowpokes next time.

This entry was posted in Trident, VGA. Bookmark the permalink.

17 Responses to About Those Trident VGAs…