This might save someone a bit of head scratching… 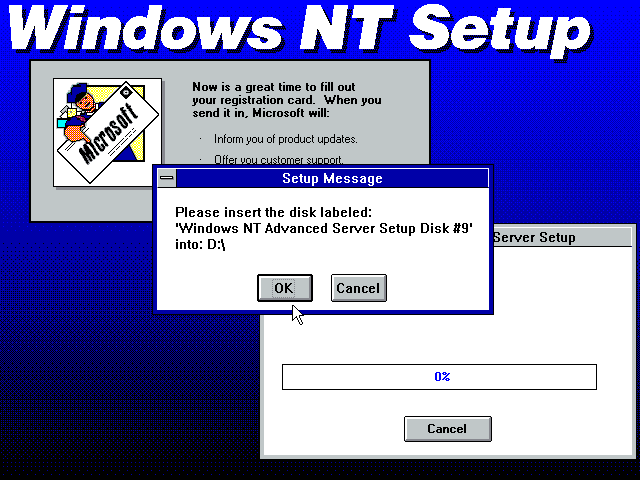 Yet going the longer route—boot DOS, copy files from CD-ROM, create boot floppy, boot from that floppy—worked just fine. The ISO looked legitimate, with no striking signs of being thrown together from random files (notably the metadata in the volume descriptor contained Microsoft information like the real CD-ROM should). What’s more, the same procedure worked for NT 3.1 workstation, so I was reasonably certain I was not doing anything outrageously wrong. So why wouldn’t it work?

Fortunately, a friend provided a slightly different NT Advanced Server ISO which looked almost, but not quite, identical. Comparing the two I quickly zoomed in onto \I386\SETUP.IN_. And then I noticed that on the problem ISO, the file was timestamped in 2003, not 1993. Oops…

Comparing the two INF files the problem was obvious. Someone was trying to be clever and modified the file to remove the silly checks which cause the setup to fail on Pentium Pro and later CPUs (with CPUID family 6 or higher). Unfortunately that person probably took the INF file from the floppy-based file set as a basis and the media list was wrong. Instead of listing one floppy and one CD, the INF file listed a bunch of floppies.

What the INF file contained was this:

But what should have been there is this:

Needless to say, the true original ISO has no problem and installs fine onto a clean disk when booting straight from the CD install boot floppy.

To recap, if you have an NT Advanced Server ISO where the file \I386\SETUP.IN_ is not from 1993, it’s a poorly modified copy and not the original, and it may be impossible to install depending on the installation method used.

This entry was posted in Debugging, NT. Bookmark the permalink.