Posted on September 5, 2016 by Michal Necasek

An interesting piece of hardware popped up at the OS/2 Museum not long ago. It’s an E-mu SoundEngine General MIDI sound module from 1993. This module has very close ties to the original Creative Wave Blaster upgrade module, even though that’s not very apparent from the outside.

The module is Mac-centric with Mac-style serial connectors and a way to daisy-chain Mac serial printers or modems. But it also has standard MIDI IN/OUT/THRU connectors so an antique Mac isn’t required to use it.

Looking inside, a certain similarity with a Wave Blaster emerges: 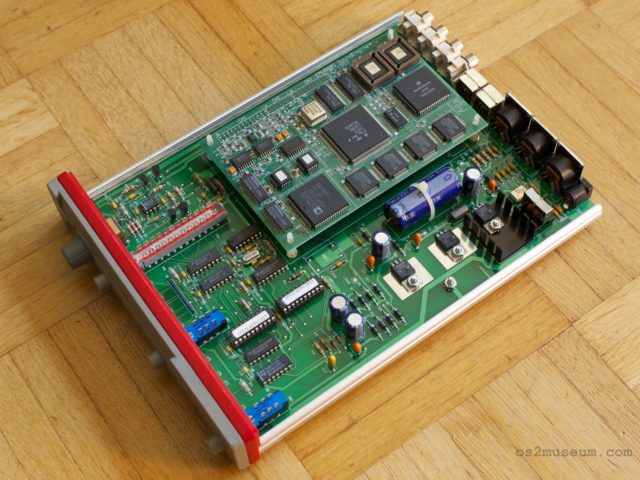 Yes, that card with chips on it is the size and shape of a Wave Blaster.

Here’s a closer look at the board:

It’s the exact same format as a Wave Blaster, but notably with a mirrored 26-pin connector (CN1, upper left in the photo).

So what does the EMU8805 board do? Quite a bit. It’s easiest to describe its inputs and outputs. Just like a Wave Blaster, it takes MIDI input as a serial stream, and likely also provides MIDI output. And there is stereo analog audio output which represent the “rendered” MIDI data stream. Other than power and reset pins, that’s really it.

The large chip in the center is an E-mu IC376, same as on a Wave Blaster; this is the synthesizer chip, a predecessor of the E-mu 8000. The large chip on the right is a classic Motorola 68000 processor; this chip is responsible for parsing and processing MIDI data and controlling the synth. The large chip in the lower left is an Analog Devices ADSP-2105, a DSP which provides reverb and chorus effects. The four smaller square chips at the bottom of the board are Asahi Kasei ROMs, 1 MB each, for a total of 4 MB of waveform data.

The rest of the unit is a case with connectors, front panel buttons, power converters, a bit of logic, and a giant 4700 μF Nichicon capacitor. There doesn’t appear to be anything particularly interesting about it.

Several sites claim that the SoundEngine is a 1995 device. That seems extremely unlikely given that all identifiable chips in the OS/2 Museum’s unit were made no later than 1993 and that the board displays a 1993 copyright message. The unit was most likely produced in June 1993 (0693) as evidenced by the serial number. The confusion may be caused by the fact that Sound on Sound published a review of the SoundEngine in 1995. 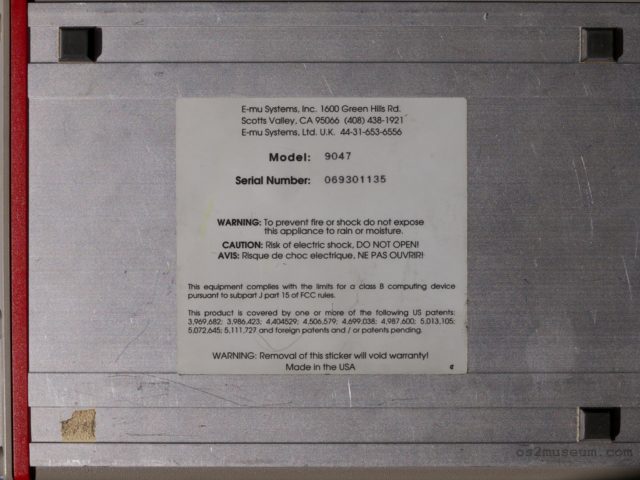 Relationship to EMU8801 and Wave Blaster

The EMU8805 is an improved version of EMU8801, which is almost identical to a Wave Blaster (aka Creative CT1900). That is obvious from this photo, for example. E-mu had been in the synth business for a number of years when it started offering the EMU8801 SoundEngine in 1992. The EMU8801 was essentially an OEM version of the E-mu Proteus synthesizer with General MIDI support.

Creative resold the SoundEngine as the Wave Blaster CT1900 and cooperated with E-mu on the design of AWE32 and Wave Blaster II (both based on the EMU8000 chip). Creative liked E-mu synths so much that it bought the company in 1993.

The EMU8805 is very similar to the older EMU8801. The synth chip is identical. The major difference is the addition of a DSP for reverb and chorus effects. The EMU8805 appears to use the exact same instrument ROMs as its older sibling (the markings on the ROM chips are identical). However, the added DSP significantly changes the results.