30 years ago, in September 1986, Compaq announced the Deskpro 386, a PC as revolutionary as it was conservative. Compaq decided to forge its own path and not wait for IBM to introduce a 386-based PC. At the same time, Compaq made only minimal changes to the PC/AT architecture and essentially added a 32-bit CPU (a 16 MHz Intel 80386) to a 16-bit system. 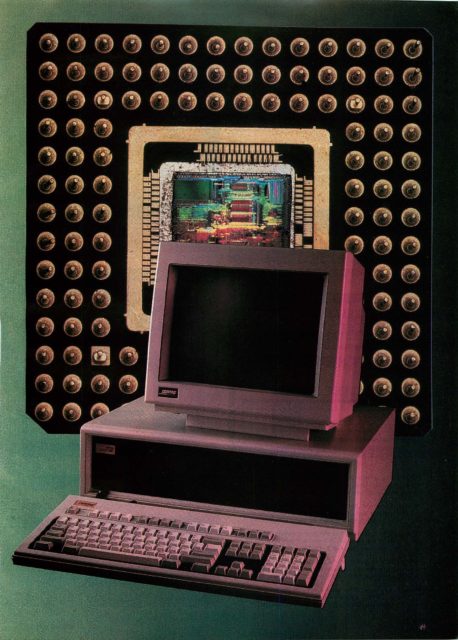 In retrospect, the Deskpro 386 did much more—and much less—for bringing PCs to the 32-bit era than contemporary observers expected. It was justifiably considered one of the most important new PC products of 1986; for example the PC Tech Journal honored the Deskpro 386 with its 1986 Product of the Year award.

The Deskpro 386 unquestionably set a standard for 386-based PC/AT compatibles, and in hindsight it’s obvious that it was much more successful than IBM’s far more radical 386-based PS/2 machines (we are nowadays running successors of the Deskpro 386, not of the IBM PS/2 systems).

At the same time, the amount of actual 32-bit software that users could run on a Deskpro 386 was negligible. Until the end of the 1980s, the vast majority of PC software was 16-bit, and it took another decade until Windows 95 introduced a more or less 32-bit operating system to the typical PC (neither OS/2 2.0 (1992) nor Windows NT (1993) truly count in that regard).

The first 32-bit PC operating systems also didn’t take too long to materialize (386 XENIX and other 32-bit UNIX variants), although early Intel 386 chips had major bugs making it very difficult or impossible to run a 32-bit protected-mode OS with paging. And as mentioned above, it took another decade before the mainstream moved to a 32-bit OS.

Other manufacturers started releasing 386-based PCs before the end of 1986 and in the late 1980s, essentially every OEM except IBM offered a 386 system that was more or less a Deskpro 386 clone. Software written for the Deskpro 386 runs well on later 32-bit PCs.

The Deskpro 386 was expensive yet attractive. It didn’t sell in huge numbers but anyone needing top PC performance in 1986 got one. A 16 MHz 386 was at least twice as fast as a then-typical high-end 8 MHz PC/AT and clones. It is no surprise that for example Microsoft developers used Deskpro 386 machines as soon as they were available.

While the Deskpro 386 was typically used with MS-DOS, an operating system designed for the original IBM PC, Compaq made one very notable addition: CEMM, or Compaq Expanded Memory Manager. CEMM, which later morphed into EMM386, was a critical piece of software which worked with DOS but took advantage of 386 capabilities. It’s fair to say that CEMM and its successor and competitors (EMM386, 386MAX, QEMM) extended the useful life of DOS by several years.

Not to be forgotten is one later arrival, Windows/386. The initial mid-1987 release of Windows/386 specifically claimed to be designed for the Deskpro 386. And although Windows/386 was not a hugely popular product, and was often considered inferior to its contemporaries like Quarterdeck’s DESQview, it was a direct ancestor of Windows 3.0 and Windows 95.

Repeating technical details about the Deskpro 386 would be somewhat redundant. Readers can easily find contemporary reports, such as Compaq Deskpro 386: The New Standard in the March 1987 issue of PC Tech Journal (page 48). Apart from the CPU itself, the only major difference from a PC/AT was the addition of a special slot for a 32-bit memory expansion board.

One notable curiosity is that it was not possible to install a 387 FPU because there was no socket. Due to the major delays in the availability of the 80387, the original Deskpro 386 only had a socket for a 287 FPU—much slower than a 387, but actually available in 1986.

All in all, the Deskpro 386 made Compaq a respected industry leader. After IBM announced the PS/2 line, Compaq ran three-page ads with the following text: Recent PC announcement left Compaq in an enviable position. Compaq still works better. It’s safe to say that history did not disagree with Compaq.