This is a follow-up to a previous post. I’ve had a chance to spend more time recovering the two dead PS/2 Model 80s. The first step was replacing the CMOS batteries because without a functioning backup battery, a PS/2 is more or less a brick (a 40-pound brick no less).

Although the Model 80 uses very unusual (for desktop computers) batteries, sourcing them is luckily no problem in 2016. For reference, the original batteries IBM used— Panasonic BR-P2 in my case—lasted upwards of 20 years. 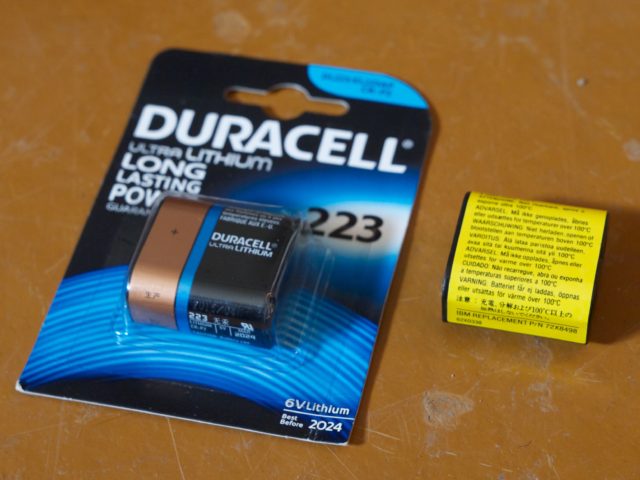 After some digging, I discovered that I have a total of four PS/2 floppy drives. You’d think at least one of them would still work…  but it’s not that simple. One of the drives was a Ye Data YD-701 made in 1989. Sadly this beast has the card-edge connector used in older PS/2s and although it has an adapter, it does not have a regular 34-pin connector. I have no suitable cabling so can’t use it. That is sad because this drive has classic through-hole electrolytic capacitors which all look good, at least visually.

Next one is a Mitsubishi MF355C from 1991, IBM FRU 64F0162. This drive acts  dead and does not spin up at all, although the LED lights up. It has one fishy-looking SMD capacitor.

So that leaves the two other drives, which are both ALPS DFP723D33A, and both have the exact same problem with wobbling. Further experimentation confirmed that when they wobble, the motor does not spin as fast as it should. After a minute or two of warm-up, they tend to start working. Each of these drives has at least one SMD capacitor which looks visually very suspect (corrosion on the leads). 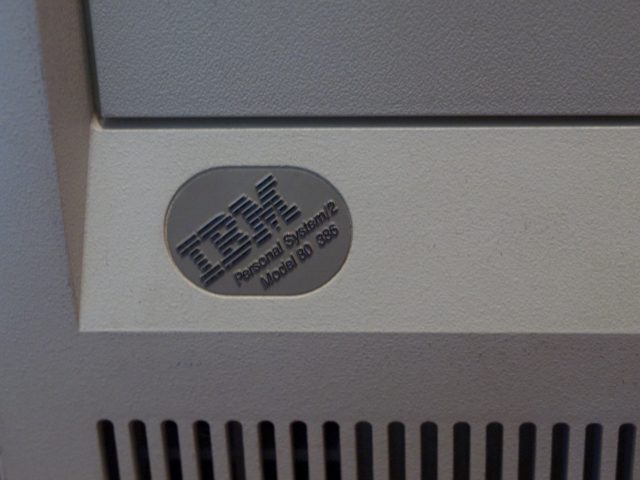 This unit was upgraded to 8 MB on the planar and further 8 MB on an adapter board. POSTing the memory takes painfully long. The system also has a 3270 adapter, 3Com Etherlink/MC (AUI + BNC), and an ATI 8514/Ultra. That’s in addition to the non-cached IBM SCSI controller. Since the unit came with no disks, there are two random Quantum 50-pin SCSI drives for a total of slightly over 1 GB storage (not bad for a 386).

The ATI graphics adapter was causing trouble and I removed it (more about that later). I also removed the memory expansion to shorten POST time. The Etherlink/MC had to be reseated to be properly found. The IBM SCSI adapter was causing strange problems. It was configured by the reference disk but no SCSI devices were visible. I took the adapter out and cleaned it, and after that the system found the two SCSI drives.

The ATI 8514/Ultra, when plugged in, caused the system to not boot at all. It just sat there with a blinking cursor in the upper left corner and never got to testing any memory. After some digging, I suspect there is some problem with the card’s ROM. Disabling the ROM makes the system boot, and the adapter definitely worked—I could get 1024×768 modes. But the ROM should contain POST code and that’s probably why it hung. The ROM chip will have to be investigated further when I get a chance.

After finally getting all the adapters more or less working, the system now happily boots up, almost as good as new. 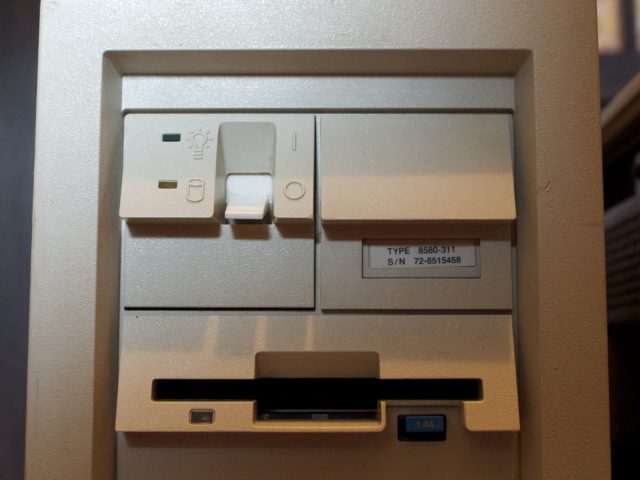 This unit has the original ESDI disk, a gigantic IBM 5¼” full-height monster which sounds like a jet taking off when it’s powered on. It’s been upgraded to 6 MB RAM on the planar and another 8 MB on an adapter, and it has a true blue 8514/A installed.

The 111 had trouble with the 8 MB adapter card which caused POST errors. Upon closer inspection I noticed that two of the four SIMM holders have broken off latches and the SIMMs are not firmly seated. I don’t know if that or something else was the problem, but I removed the adapter; 6 MB RAM is still plenty for this system.

The machine finally booted up and other than sometimes deciding that the display is monochrome instead of color, it works very nicely (and can boot to OS/2 1.0, 1.1, or 1.3). The only problem is the floppy drive, not only that it is flaky but I also don’t have the right parts. The floppy drive cage in the 8580-111 is different from the newer 8580-A21 and drives for the newer systems can’t be properly installed (they don’t sit in place).

It is interesting to evaluate technology that is nearly 30 years old now. The build quality of the systems is excellent, although when moving the units around I wish IBM hadn’t used as much steel as a small country back then. The case cover is held in place with two large screws that can be removed with a coin. Adapter cards are held in place with screws that can be operated without tools as well, and there are nice guards that make it fairly easy to insert adapter cards. Floppy drives and hard disks can be removed without tools as well. There are no sharp edges, the overall design is excellent.

Some things have not aged well. On both of my units, the foam padding on the covers has partially melted and turned into black goo. The floppy drives, as is well known, have a tendency to die, although the blame probably lies with Japanese 1.44M drive makers and then-new SMD capacitors.

I don’t know if my two units were not exposed to light much or if IBM used better materials, but the plastic does not show signs of yellowing. The paint on the units is also excellent and remarkably difficult to scratch.

After a few more tries, the 8514/Ultra decided that the ROM isn’t so bad after all and it POSTs when the EEPROM (and ROM) is enabled. Interestingly, the ATI’s test program says the ROM is still faulty. Oh well, the card works fine.

Sadly, the memory expansion board for the A21 decided that its ROM should stop working and reports error D4000 114 which indicates checksum failure for ROM at D4000 (the memory card’s ROM). Luckily 8MB is more than enough for the operating systems installed on the box (DOS, OS/2 1.0, OS/2 1.1, OS/2 2.0). There is no problem with the SCSI adapter’s ROM.

This entry was posted in Floppies, IBM, PS/2. Bookmark the permalink.