Ever been wondering why there are chips labeled MHS on many Sound Blaster cards, and why there usually was some chip with a © Intel marking? For example this one, on a Sound Blaster 1.5 (1991): 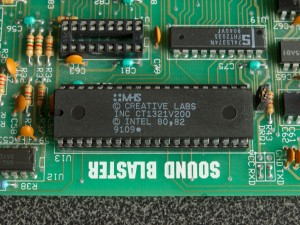 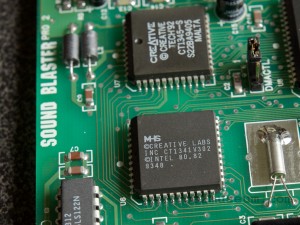 I was wondering the same…

But what does Intel have to do with this? Well… the MHS-branded and Intel-copyrighted chips were the Sound Blaster DSPs, or Digital Sound Processors (not Digital Signal Processors!). In reality, the DSP was an Intel MCS-51 family microcontroller with pre-programmed ROM.

This is why the chips bear two © labels: The microcontroller as such is copyrighted by Intel, but the ROM was developed by Creative and bears a separate copyright. And MHS had a license from Intel which allowed it to manufacture the microcontrollers. 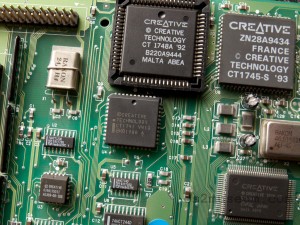 As the above specimen shows, not every DSP chip was made by MHS; some were made by Intel, for example. Then again, the photo also shows that Creative had other chips produced in France, too (and on Malta—that was presumably SGS Thomson, now ST Microelectronics, another company with French heritage).

The fact that the Sound Blaster DSP was a standard microcontroller makes it naturally interesting as a target for dumping and disassembly. Not surprisingly, certain people are already on it.

It is not known to me if anyone had disassembled any DSP revision ROM yet. But it would obviously be of use to emulator writers, since even the early DSP revisions implemented quite a few undocumented commands. The Sound Blaster diagnostic utilities from Creative are heavy users of those commands.

Sound Blasters were likely an early example of a PC sound card utilizing an off-the-shelf microcontroller design, but the use of microcontroller in sound processing is far older. For example Yamaha’s FM synthesizers had a built-in custom microcontroller with its own program in ROM. That design goes back to the early 1970s and is clearly described in J.M. Chowning’s original US Patent 4,018,121 (1975). The patent shows a custom “microcontroller” built from discrete parts (many from Intel, not surprisingly) and running a simple program.

Many later synthesizers likewise used off-the-shelf microcontrollers or microprocessors (e.g. Motorola embedded 68K CPUs on certain Turtle Beach or Ensoniq boards). By the year 2000, PC CPUs had enough spare power that sound cards with complex standalone logic were on the verge of extinction and most control functions were taken over by the main CPU together with the chipset.

This entry was posted in Intel, PC hardware, Sound Blaster. Bookmark the permalink.