The OS/2 Museum recently obtained a somewhat unusual board: A 1993 vintage 486 PCI/ISA board equipped with the Intel 420TX chipset. 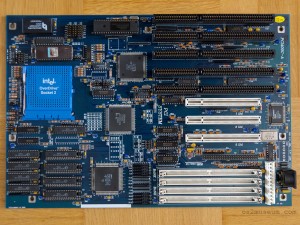 The 420TX chipset, codenamed Saturn, was probably Intel’s first PCI chipset available to customers. It was probably first sold in 1992. The 420TX consisted of three chips. 82423TX and 82424TX together formed what would later be called a northbridge, and 82378IB was the southbridge.

Identifying the board took a little while but in the end wasn’t too difficult as it has several very unusual features. A Socket 2 486 board with PCI slots, onboard SCSI controller, but no onboard IDE or floppy—that is a rare sight indeed.

The board is a J-Bond PCI400C-A. In some materials it may be referred to as a J-Bond PCI 486. It is equipped with a dizzying array of jumpers, quite unusual for a board which only supports two frequencies and three or four different CPU types.

There is 256K cache on the board; as with many later chipsets, 256K is the best compromise between size and performance because 256K is divided into two banks, while a larger 512K cache would only consist of a single bank and thus be slower.

The board designers were kind enough to not solder the Dallas-style RTC onto the board. That should make replacements easy, although the original 1993 Benchmarq RTC still works—after 22 years!

As it turns out, the board was made in the good bad old days before Plug and Play became friends with PCI.

The board supports up to 4 PCI devices: The onboard SCSI controller and three slots. For the two pairs of slot 1/slot 2 and slot 3/onboard SCSI, only one device in each pair can be a PCI master; jumpers determine which. For each of the three slots, jumpers choose which IRQ should correspond to PCI INTA#. The choice is one of IRQ 3, 5, 10, 11, 14, 15.

Additionally, the BIOS setup determines whether a PCI device will be enabled. 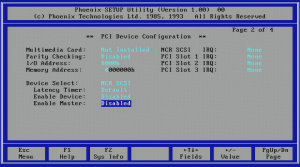 Given that the board is very, very old and only supports PCI 2.0 (not even 2.1), compatibility problems are to be expected. But the onboard SCSI PCI HBA appears to work (not fully tested), and at least some PCI graphics cards work as well.

OverDrive, or maybe not?

Being a Socket 2 board, the PCI400C-A supports Pentium OverDrive upgrades. Except all attempts to install a known working Pentium OverDrive processor (two different ones) were utter failures—the board didn’t even start booting.

Fortunately at least 486 OverDrive CPUs work well in the board. With a DX2ODPR66 OverDrive the board performs reasonably well, and it should support 100 MHz DX4 OverDrive processors as well. (This is to be tested soon.)

The performance of the chipset/board is… odd. With a 66 MHz Intel DX2 processor, Norton Sysinfo shows score of 129.0. That is markedly low for that CPU in a board with 256K L2 cache. The same CPU scores slightly over 140 in other boards, for example 143.6 in an Alaris Cougar board (OPTi 499 chipset).

Other benchmarks tell a different story. CACHECHK suggests and SYSBENCH confirms that the board has good memory throughput, in fact much better than the OPTi 499. The system memory read/write/move speeds are 28.1 MB/2, 41.6 MB/s, and 21.7 MB/s on the 420TX board. On the OPTi 499 board it’s only 20.2 MB/s, 32.0 MB/s, and 10.3 MB/s. In both cases this is with the fastest timings available in the BIOS setup and with FPM RAM.

A “real world” benchmark (DOOM) confirms this. With the same CPU and graphics card, timedemo 3 completes in 1979 ticks with the OPTi 499 chipset and only 1553 ticks on the 420TX.

It is currently unclear why the 420TX scores poorly in Sysinfo. But there is every indication that the chipset is not a bad performer and the Sysinfo score is an aberration.

One possible explanation is that the L2 cache works differently on the 420TX chipset. SYSBENCH indicates that memory moves within L1 are significantly faster on the OPTi 499 board, even though the 420TX is generally somewhat or much faster.

The PCI400C-A itself is commendable for having almost every jumper setting silkscreened on the board itself. A good thing, too, given how many jumpers there are. The BIOS has likewise good built-in help explaining the various settings.

Unfortunately there appears to be very little information about the 420TX chipset available. There is a brief overview of the 420TX chipset, but no documentation of the chipset’s registers.

That is too bad, since the 420TX is an interesting piece of computing history, a true PCI pioneer.

Update: The 82378IB datasheet has been hiding in plain sight. Unfortunately the “northbridge” datasheets are still nowhere to be found. The 82378IB documentation confirms that there is no PCI IRQ steering whatsoever, so the board must have jumpers or some external means of translating PCI interrupts to 8259A IRQs. A related problem is that the 82378IB does not have any way to select level- vs. edge-triggered interrupts for individual IRQ lines. That most likely precludes any IRQ sharing, and might prevent some PCI devices from working.

This entry was posted in 486, Intel, PC hardware, PCI. Bookmark the permalink.