When Microsoft started offering OS/2, the arrangement was roughly similar to how DOS 3.3 had been handled: Microsoft and IBM jointly developed the code, IBM maintained its own version, and Microsoft licensed an “adaptation kit” to OEMs. While the IBM and Microsoft versions were not identical, they were interchangeable from application perspective. There was no retail MS OS/2 package, and perhaps due to lower interest there also wasn’t a “packaged product” for OEMs (like there had been with MS-DOS since version 3.2).

Numerous OEMs licensed MS OS/2 1.0 in anticipation of it being the wave of the future, as Microsoft and IBM loudly proclaimed. OEM interest persisted through OS/2 1.1, but significantly waned by the time OS/2 1.2 was released. This coincided with Microsoft’s shift of focus towards Windows 3.0. 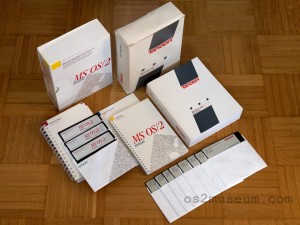 Pictured above are MS OS/2 1.0 (Epson OEM release) and MS OS/2 1.21 (Tandon OEM release). These were among the first and last OEM releases of OS/2. The Epson version was a relative latecomer, coming out in the second half of 1988. The Tandon version was released in summer 1990, when Windows 3.0 was already on the market.

The situation with MS OS/2 was not unlike MS-DOS at the time. While OEMs had opportunity to customize their releases, Microsoft had a complete OS which ran on standard IBM compatibles. By necessity, Microsoft made the vanilla releases of its OS/2 available as part of the infamous $3,600 MS OS/2 SDK.

As a consequence, OEMs selling highly IBM-compatible hardware (and that was most of them) had very little work to do when adapting MS OS/2. That applied to both the program code and the documentation. 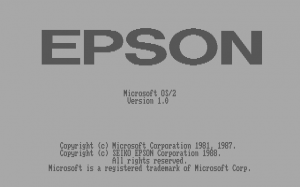 One of the scant differences was the addition of an OS2VER utility which ran in both OS/2 and DOS mode: 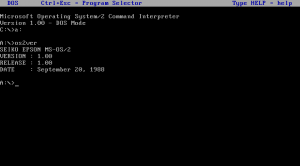 The documentation was likewise minimally customized but did make several references specific to Epson systems. There were three publications: A small Setup Guide booklet, and two larger ring-bound documents,  a Reference Manual and a Command Summary.

The software itself was shipped on three high-density 5¼” floppies. Two of those (Install and Program disks) were bootable, the third (Supplemental disk) was not.

The Tandon release of MS OS/2 1.21 was so lightly customized that it was difficult to spot the differences. One of the very few modifications was the Tandon copyright displayed during boot: 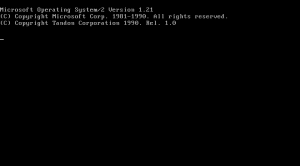 There were no additional utilities and the Presentation Manager was as shipped by Microsoft, with no mention of Tandon whatsoever: 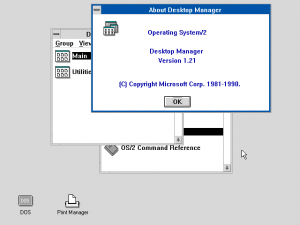 The operating system was delivered on 9 high-density 5¼” floppies, a significant increase since the times of OS/2 1.0.

The printed documentation (a single large three-volume paperback) was entirely untouched by Tandon and looked exactly like Microsoft’s DOS and OS/2 manuals from the era. Only the book cover provided a clue that the manual had anything to do with Tandon.

The first OS/2 OEM release (not counting IBM’s) was from Zenith, in December 1987. Zenith collaborated with Microsoft on the OS/2 BAK (Binary Adaptation Kit). As a reward for helping Microsoft, Zenith was given a chance to release MS OS/2 before other OEMs.

It is unlikely that any OEM releases of MS OS/2 1.3 existed. OS/2 1.3 was released in 1991, at a time when IBM was officially an enemy and OS/2 was rapidly ceasing to exist in the world of Microsoft. MS OS/2 1.3 was most likely only available bundled with Microsoft LAN Manager 2.x, and that only because OS/2 was the only base OS the server portion of LAN Manager could run on at the time.

This entry was posted in Microsoft, OS/2. Bookmark the permalink.