From the Annals of Branding 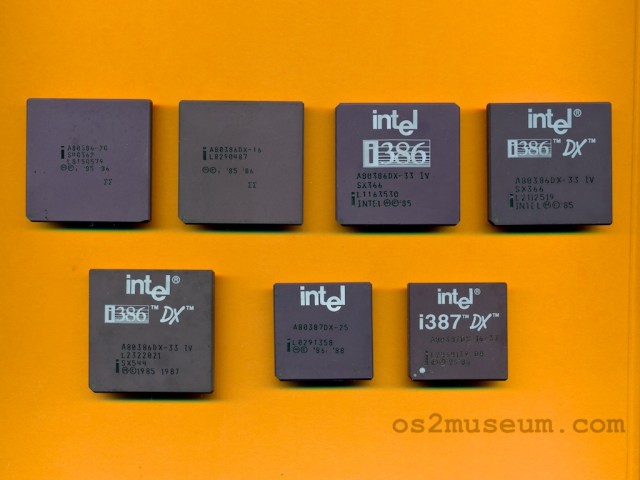 The real difference is that some of them are fabricated on an older process and thus sport a larger die size than others. (They’re also not all rated to operate at the same frequency, but that is not a design difference).

The more obvious difference is the labeling. From plain chips to i386 to i386 DX. The chips neatly illustrate an important chapter in Intel’s history. The leftmost chip was manufactured sometime in early 1988 and doesn’t look very different from the original 386s, or any other Intel chip of the era. It’s simply a slab of gray-brown ceramic with etched markings. The only noteworthy feature is the double-sigma (ΣΣ) marking indicating a 386 which reliably performs 32-bit operations.

The CPU looked boring, because it was simply a microchip locked inside a computer and a normal user never got to see it, not unless something went wrong. There was just no reason to make it look like anything special.

The next chip looks extremely similar (and it is!) but the chip designation changed from A80386 to A80386DX. This chip was manufactured around mid-1988 and is just slightly newer. At that time, Intel was in an complex position. The 386 was an undisputed speed king in the world of PCs, and only Intel could manufacture 386s. But 386s were quite expensive and had to compete against much cheaper 286s… which a number of companies manufactured.

To improve its position, Intel decided to release a cheap 386, the 386SX. SX stood for Single-word eXternal, as opposed to Double-word eXternal (DX) of the “real” 386s. Because the 386SX used a 16-bit external bus, existing AT system designs could be relatively easily adapted to work with it. The 386SX was a intended to reduce the 286 market share and thus increase the market share held by Intel, and improve Intel’s position as the only 32-bit x86 chip supplier.

The original 386 was retroactively renamed to 386DX. This is reflected in Intel documentation—pre-1989 manuals talk of 80386, later releases instead mention 386 DX or even Intel386 DX instead.

The next chip can run faster (at 33MHz) but is otherwise 100% compatible. Yet the visual difference is striking. There’s a large Intel logo and an even larger i386 logo. This chip was manufactured in early 1991. In the late 1980s, Intel undertook a major effort to build its own brand. Instead of being just a chip supplier for PCs from IBM, Compaq, AST, or Zenith, there was a concerted effort to brand Intel CPUs as the heart of a PC (and not just a PC, see e.g. the Sun 386i). 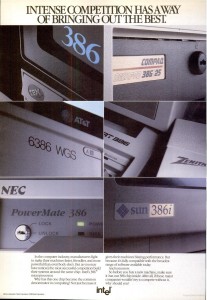 This was again directly tied to the fact that 386 was the first Intel processor which was not licensed to second-source manufacturers (AMD, Harris, Siemens, etc.). Intel proactively built up its own brand in order to make it harder for any alternative CPU vendors to compete. The same chip markings can be seen in the following 1988 ad: 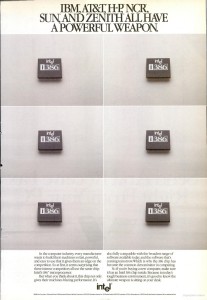 The rightmost chip is a variation on the previous one. The Intel logo is the same, but the i386 logo is smaller to make room for the enlarged DX designation. There’s also an extra ® and two more ™ stamps, a sure sign that the legal department had been busy. This design is visually similar to Intel’s 486 processors sold at the time.

Similar treatment was also applied to Intel’s 387 FPUs, two of which are shown in the image at the beginning of the article. The one on the left was manufactured in mid-1990 and sports only a large white Intel logo. The one on the right is from late 1992 and adds large white “i387 DX” as well as the obligatory ® and ™ decorations (it’s also rated at 16-33 MHz, which is unusual for CPU/FPU chips).

With the 486, the DX/SX designations of course took on a completely different meaning, but the basic idea remained—DX was the “real deal” while SX was the cheaper, performance-limited variant. But that’s another chapter in Intel’s history.

This entry was posted in 386, Intel. Bookmark the permalink.

14 Responses to From the Annals of Branding