Have You Seen These Cards?

While cataloging my junk pile, I came across two graphics cards that I could not identify. Both are high-end ISA graphics accelerators from the early 1990s and both utilize Texas Instruments GPUs (long before the term “GPU” was first used, but very appropriate).

The first card was clearly made by SPEA (that is, SPEA Software AG), a German company known for its high-end graphics card. Based on the chip markings, the card must have been manufactured in the second half of 1991. 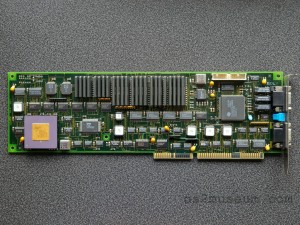 The DAC is a Texas Instruments TLC34075, presumably a 135MHz part (very fast for 1991!) and marked “prototype”. The accelerator chip is a 32MHz TMS34020, the newer TIGA GPU. The card uses VRAM, and does not appear to have any VGA compatibility or a BIOS. It has one 15-pin connector, presumably analog VGA, and one 9-pin connector, possibly a digital monitor connector. 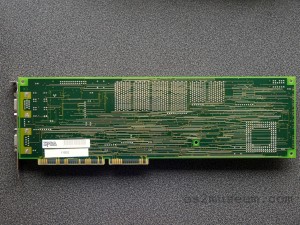 I have not been able to determine what this card is, or what its specifications are beyond what’s obvious by looking at the chips.

The other board is even more of a mystery. It’s slightly older, probably manufactured in early 1991. There are no markings identifying the manufacturer. The GPU is the original TMS34010, the DAC is a 125MHz Brooktree Bt458, and there’s a Bt432 clock chip. Nothing too unusual there.

What’s definitely unusual is the use of a Xilinx XC3020 FPGA. The Vermont Microsystems, Inc. VMI VCAD chip suggests that the board may have been made by Vermont Microsostems, a high-end CAD hardware and software specialist.

The card might be a prototype, for several reasons: The VRAM is very sparsely populated (5 chips out of 25), there’s extensive manual patching, and there are several unusual connectors on the board which could be used for debugging and testing. The FPGA utilization is unusual, but doesn’t necessarily mean it’s not a production board.

If anyone can identify either of these vintage graphics accelerators, please leave a note!

Update: The top card has been identified as one of SPEA HiLite accelerators, most likely an early SPEA Graphiti HiLite given the age of the card. The bottom card is certainly a Vermont Microsystems product, but the exact model is unknown. Likely a X/Series, but possibly a Cobra or some other model.

38 Responses to Have You Seen These Cards?