Another Vermont Microsystems Board

My junk pile turned out to contain another board by Vermont Microsystems, Inc. (VMI), probably no less exotic than the mystery board. 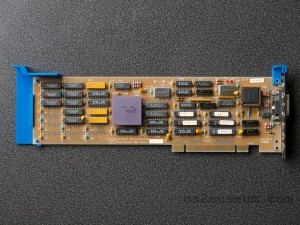 This one is a Microchannel board built around an Intel 82786. An in this case, VMI was kind enough to etch their name on the PCB, complete with the model name—Page Manager 100.

Unlike the mystery board which is equipped with a TMS34010 and a VMI VCAD chip and was clearly intended as a high-end CAD board, the Page Manager apparently targeted the desktop publishing market.

It’s built around the infamous Intel 82786, one of Intel’s many failed attempts to get into the graphics market (followed for example by the no less unsuccessful i740). 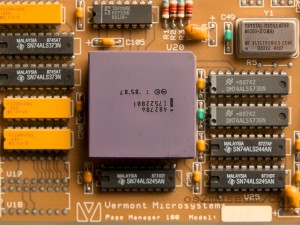 The DAC is a Brooktree Bt454, right next to a 102.5MHz oscillator. This particular board was manufactured sometime in early 1988, probably February or March.

If I’m reading the memory chip markings correctly, there are eight TMS4464-12L chips, which should add to 256KB video memory (and there’s room on the board for 8 more chips).

A very high-speed DAC (for a 1987 design, anyway) coupled with relatively small amount of video memory suggests that the board was intended for use with high-resolution monochrome monitors, typical for workstations of the era.

Unfortunately, I have nothing to hook up to this board because the display connector looks like this: 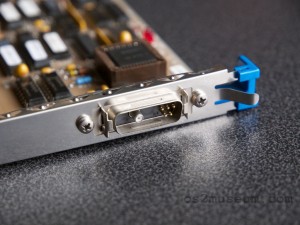 That’s a workstation style connector, most likely a monochrome version of a 13W3 plug. That confirms the suspicion that the board is intended for monochrome operation.

It’s worth mentioning that the board does not include any kind of VGA compatibility. It doesn’t need to, since it’s designed for PS/2 machines with on-board VGA.

Back issues of InfoWorld confirm that the board characteristics gleaned from simply looking at the hardware were right: The Page Manager 100 supported 1024×1024 monochrome resolution and was shipped with drivers for Ventura Publisher and Aldus PageMaker, and was available bundled with a B&W monitor for somewhere around $2,600. It appears to have been first demonstrated in August 1987, although it’s unclear whether it began selling in 1987 or 1988.

The Page Manager 100 was probably one of the early Microchannel add-on graphics cards, although it was also available in an ISA version. A relic of the bygone days when application-specific graphics adapters cost $1,000 or more.

19 Responses to Another Vermont Microsystems Board