Have You Ever Used One of These?

Still on the theme of unusual hardware… in my junk pile there’s one of these rather special little parts: 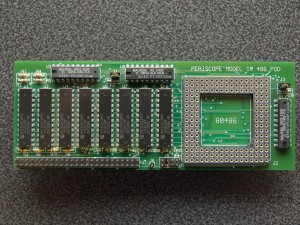 As the label on the PCB says, this is a 486 pod for a Periscope IV debugger. The Periscope Company of Atlanta, GA was a respected supplier of hardware-assisted debuggers in the late 1980s and early 1990s.

A look at the bottom side should make it more apparent where and how such a pod is installed: 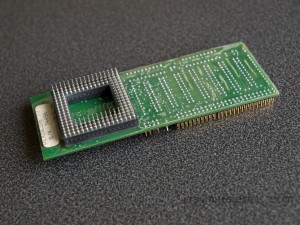 The pod sits between the motherboard and the CPU. It contains several SRAMs, and a connector for a rather large 50-wire flat ribbon cable. This cable is then connected to an ISA board plugged into another system. I have the board and cable as well, but they are still waiting to be photographed.

The pod is essentially a processor bus probe. It snoops on all external processor traffic and sees all memory and I/O accesses initiated by the CPU. This was the greatest strength of the Periscope hardware, but also its downfall.

The problem was that once CPUs started using internal cache, a Periscope debugger was no longer able to see the whole picture. Yes, it was possible to disable the internal cache, but that killed processor performance. The aggressive burst reads used by 486s also didn’t help, as the CPU liked to access memory it didn’t “need”.

The Periscope boards were not cheap (something on the order of $5,000), but they were significantly more capable than a pure software debugger and still significantly cheaper than a full-fledged ICE.

On 286 and earlier CPUs, Periscope implemented the functionality provided by the debug registers on 386 and later processors. A huge advantage of the Periscope debugger was that it did not require any software to be installed on the target system. That made it suitable for debugging adapter card ROMs, boot loaders, and similar software where a traditional software debugger was not of much help.

In the 1990s, the market for products of The Periscope Company shrank to the point where the business was no longer viable. Software debuggers got better, the CPUs had better debugging capabilities, it was much harder to apply the technology to processors with built-in cache, and last but not least, there were far fewer potential customers as the industry consolidated.

Now a question to the readers: Have you ever used a Periscope hardware debugger? Or a similar product like Atron? Do you still have one, and if so, does it work? And does anyone have a spare 386 pod for Periscope IV?

This entry was posted in Debugging, PC hardware. Bookmark the permalink.

35 Responses to Have You Ever Used One of These?