Posted on February 8, 2014 by Michal Necasek

The OS/2 Museum recently acquired one of the famous IBM 701 ThinkPads, commonly nicknamed “Butterfly” thanks to the fold-out keyboard. Unfortunately, the unit suffered a fate common to many old ThinkPads—battery leakage. 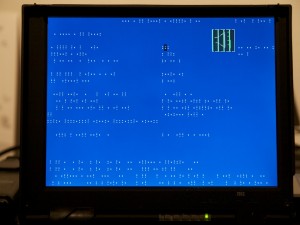 The unit would power on, but it had serious problems. The CMOS battery was dead, causing errors on each startup, and the graphics chip was flaky, fairly often resulting in completely corrupted characters in text modes and very strange looking graphics modes. Worst of all, the unit was very unstable, sometimes not even making it past POST and never staying up for more than a few minutes.

The first order of business was cleaning up the damage caused by leaked batteries. It’s actually not clear if the main battery or the standby battery leaked, since they are located right next to each other. Most likely both leaked. 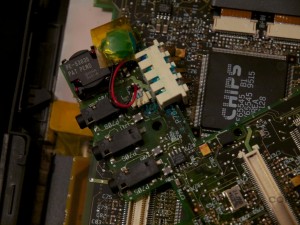 As usual, the standby battery connector had oxidized so much that the connector broke on an attempt to unplug it. This time, the wires surprisingly did not snap, they just fell out while leaving the plastic plug in place. Fortunately it was possible to remove the plastic with needle-nose pliers and moderate force. 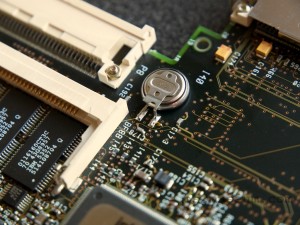 The original battery had a custom holder spot-welded and replacements do not appear to be easily available. Luckily there is some space under the board and it’s possible to squeeze in a CMOS battery designed for a ThinkPad 600 (CR2025). 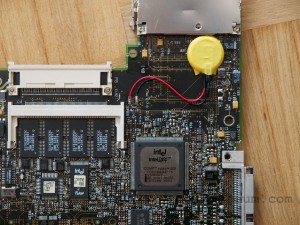 Once the unit was reassembled, there was a moment of suspense… was the system going to work better than before, and in fact was it going to work at all? Luckily, it did work!

The replacement battery did the trick; the unit no longer complained on every boot and was able to remember BIOS settings. Even better, both the graphics glitches and the lock-ups were gone. It’s unlikely that the replaced battery fixed those; more likely getting the metal oxides created by battery leakage off of the system board cured the problems.

The standby battery is dead, but that’s not a big deal since I only have a single main battery anyway. What’s worse is that the main battery, even though it is an unused replacement, doesn’t work either—the unit recognizes it, charges for a while, and eventually claims the battery is at 100% charge. However, the battery shows pitiful 4.5V (instead of the nominal 10.6V) and naturally can’t power the laptop for even a fraction of a second. There is no apparent damage to this separately obtained battery, but it looks like it just spent too many years in storage. Even so, the main battery was good enough to fool the ThinkPad BIOS update utility.

Other than that, the Butterfly is going strong, with no corruption or lock-ups seen since the clean-up, and that included some serious testing running DOOM benchmarks (“timedemo”); in its previous state, the laptop didn’t survive even a single timedemo iteration.

Once the laptop was working, I thought I could replace the aftermarket 2GB IDE disk with a CF card “SSD”. Sadly, this didn’t work, for two reasons.

First, despite repeated trials, the Butterfly had bizarre problems accessing data on several different CF cards. I was able to partition and format the card, but after either SYS or FORMAT /S, the newly written system files were not accessible and CHKDSK reported errors. The same problem occurred with several different cards. It looked like a geometry mismatch but I was unable to resolve the problem.

Second, the system had a nasty tendency to lock up while accessing the CF card. That could possibly be caused by incorrectly written BIOS which can not handle fast devices; IBM’s original PC/AT BIOS did have such trouble.

I also tried a 1GB IBM Microdrive with the same IDE-CF adapter, and the Microdrive did work well in the 701C where a CF card did not. Unfortunately a Microdrive doesn’t have significant advantages compared to a regular laptop IDE drive, aside from being quieter and perhaps more energy efficient.

What’s interesting is that other 700 series ThinkPads from that era have no trouble with CF cards. However, the Butterfly has a somewhat different BIOS, which may explain why it has trouble where other ThinkPads don’t.

It’s also worth mentioning that all the CF cards I tried (as well as the otherwise well functioning Microdrive!) failed the built-in diagnostic test, that is to say, hung during the test. Unfortunately the test does not indicate why. Oh well.

This entry was posted in PC hardware, ThinkPad. Bookmark the permalink.