In 1994, sound cards with wavetable synthesizers were all the rage. Typically these supported 24-voice or at most 32-voice polyphony. So 44-voice synthesis sounded fancy. The following text can be found in a README file in the driver package for the MediaTriX Audiotrix Pro sound card:

The Audiotrix Pro was based on Yamaha’s OPL4 synthesizer (YMF278B plus DAC). The OPL4 wavetable synthesizer supported 24-voice polyphony. That’s a lot less then 44. But the OPL4 also included the OPL3 core, which provided up to 20 voices using classic FM synthesis. 24 + 20 = 44.

The Audiotrix Pro was not the only sound card based on the OPL4 chip. And it was certainly far from the most widespread one.

Then there was the Yamaha Sound Edge SW20-PC. This card also included a Yamaha effects processor and it in practical terms just as unobtainable as the Audiotrix Pro. There was Logitech SoundMan Wave, again more or less impossible to find.

The German company miro Computer Products AG produced several OPL4-based boards in the 1994-1996 timeframe. The first was the miroSOUND PCM1 PRO, followed by the PCM10, PCM12, and PCM20. These were higher end cards, not quite as advanced as the Audiotrix Pro but similar. They used OPTi 929 and later OPTi 924 controllers. The miro boards are far easier to obtain than an Audiotrix Pro. 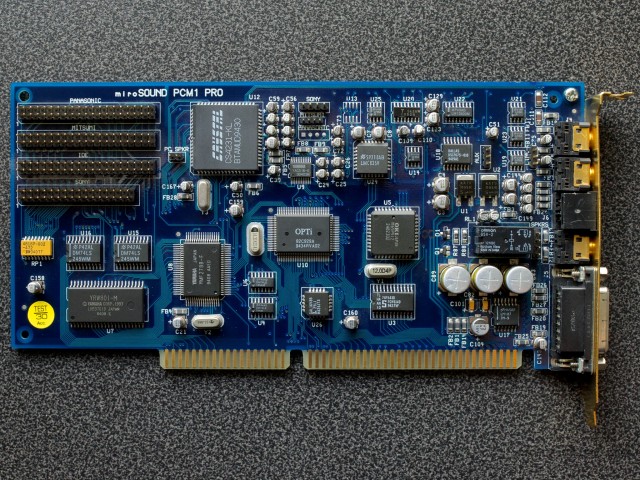 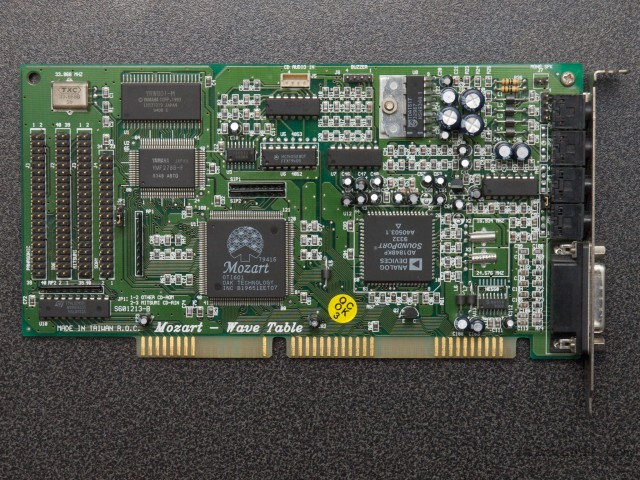 The Mozart boards were, in a word, terrible. Poor drivers, poor compatibility with Sound Blaster software. But the OPL4 chip was the same as the one on an Audiotrix Pro and the other boards. And because these cards were cheap junk, they are easy to find nowadays.

The Yamaha OPL4 chip paired with an OPTi 82C929A on the miro PCM1 board is in a way a very good match. Both the OPL4 synthesizers and the OPTi controllers were cheap but decent quality hardware, and could be found on both very cheap and fairly expensive boards. Yamaha continued the tradition with OPL3-SAx chips and later with the PCI YMF724/744/754 controllers.

For MIDI playback it’s important whether a card has a “real” MPU-401 interface. There were substantial differences among the OPL4-based boards in this regard.

The OPL4 chip itself did not directly respond to MIDI data and had to be driven by software (or firmware). Some cards, such as the Audiotrix Pro, Logitech SoundMan Wave, or miroSOUND PCM12 and PCM20, included a microcontroller which enabled direct MIDI playback over the MPU-401 interface.

And miro’s older boards (PCM1 PRO and PCM10), as well as the Mozart, provided nothing—although there’s a rumor that a software driver for the miro boards may (or may not) have existed.

So that means only the cards with hardware MPU-401 playback would be able to play the 44-voice MIDI files? Well, not quite—it’s more complicated than that.

Remember the line claiming that “only the Jukebox for Windows is able to play these 44 voice compositions”? This is a big hint that playing the 44-voice MIDI files isn’t so straightforward.

As mentioned at the beginning, 44 voices meant using both the OPL4 wavetable synth and the OPL3 simultaneously. These are effectively two separate devices in one chip, and the MPU-401 interface (on the cards which support MPU-401 OPL4 playback in hardware) only drives the wavetable synthesizer, not the OPL3 FM synth.

That’s why special software is needed; software which can drive both the ‘FM’ (OPL3) and ‘PCM’ (wavetable) portions of the OPL4 chip at the same time. MediaTriX provided such software.

Now that raises the question: Does said software require just an OPL4 chip, or does it need something only found on the Audiotrix Pro? Well, let’s see…

MediaTriX provided a DOS MIDI player called PLAYMIDI.EXE (how predictable) in the Audiotrix Pro driver package. What happens when PLAYMIDI is run on a miroSOUND PCM1 PRO with a random MIDI file? We get lovely OPL4 music!

That’s a proof as good as any that PLAYMIDI does not use the MPU-401 interface at all (if it did, it wouldn’t produce any output on the PCM1). It also means that although it’s still no good for wavetable music in games, the PCM1 can be used to play MIDI files in plain DOS.

But there’s a catch. The output produced by PLAYMIDI in DOS with existing recordings from the Audiotrix Pro doesn’t match. Everything is played through the wavetable synthesizer.

Note: PLAYMIDI has difficulties on any “fast” system, which includes 100 MHz Pentium compatibles. It works correctly on a 100 MHz 486 DX4. The problems are presumably caused by violating the OPL4 timing requirements on faster systems.

Remember the note about the special 44-voice MIDI files only being playable though the Jukebox Windows application? Maybe there is something to it… perhaps Jukebox does something special to enable simultaneous PCM + FM playback.

Then again—on closer look, probably not. The Windows Jukebox program shipped with the Audiotrix Pro seems to be a front end using the Windows MCI (Media Control Interface) for actual playback. Which means it works the same as the Media Player shipped with Windows 3.1. Listening to sample tracks confirms that.

So what’s the trick? How does one enable 44-voice playback?

The magic is in the Windows 3.1 OPL4 driver itself. It can use either PCM synthesis (pure OPL4), FM synthesis (OPL3 equivalent), or both. In case of “both”, driver settings select which MIDI channel uses PCM and which uses FM. And setting up the OPL4 driver to combine PCM and FM synthesis, we finally get the elusive “44-voice” playback! 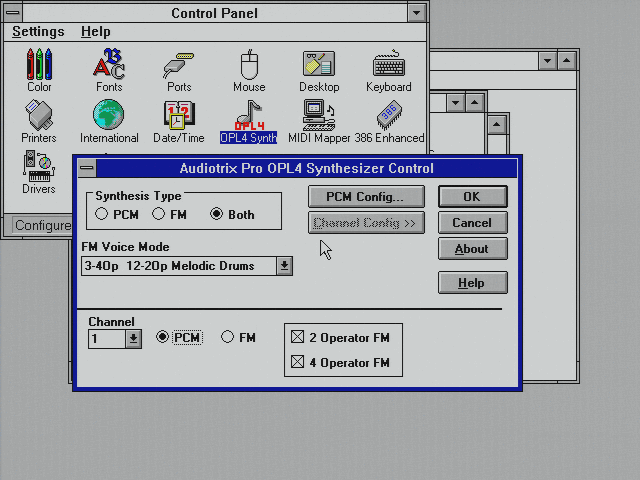 Note that the OPL4 driver shipped with the Audiotrix Pro is a lightly modified reference driver from Yamaha. It works without problems on other OPL4 cards. It was tested on a miroSOUND PCM1, PCM20, and a Mozart Wave Table board. The above screenshot was produced with a Mozart Wave Table card.

But there is a caveat. Remember that there doesn’t seem to be any information in the MIDI files about which channel uses FM and which uses PCM? There are two slightly conflicting data points.

One is the Audiotrix Pro driver which by default sets channels 1-12 to PCM and 13-16 to FM during installation. The second data point is that EUROMAN.MID has rather suggestive track names like “FM Basses” or “FM SOLO A”. Tracks associated with channels 12-16 have names prefixed with ‘FM’.

The following recordings were made with a miroSOUND PCM1 PRO using the Windows 3.1 Media Player and Audiotrix Pro OPL4 MIDI driver. The OPL4 driver was set up to combine wavetable and FM synthesis, with channels 1-11 using PCM and 12-16 using FM. The FM synth mode was “3-4 Op + 12-2 Op Melodic Drums”. There is no guarantee that this is the intended setup, but it is a reasonable guess.

The use of FM synths in the following tracks may not be obvious, and wavetable synthesis is used most of the time, but experts will quickly notice the characteristic “FM sound”.

The demo tracks use stereo effects heavily. This may require headphones or a good stereo speaker setup to appreciate fully.

These tracks are an excellent example of what a competent composer can do with a relatively cheap synth. Note that although the original files are more or less straight General MIDI, they do not sound very well on many other synths. They were clearly tailored to the OPL4.

And as a bonus, a pure PCM OPL4 track—Chants Magnetiques (Magnetic Fields) 1 by Jean-Michel Jarre (arranger unknown). Just because it sounds nice.

For reference, the Audiotrix Pro MIDI files and DOS MIDI player are available here (painstakingly liberated from a DriverGuide download).

So what have we learned from this lengthy excursion? The Yamaha OPL4 is a nifty little synth, and various OPL4 boards are much closer to each other than one might think. Also, there’s a lot that can be done even with modest means when one puts one’s mind to it.

Thanks to the music expert known as Cloudschatze for providing information about his excellent Audiotrix Pro recordings as well as exchanging a few ideas about how 44-voice MIDI might or might not work.

This entry was posted in MIDI, Sound. Bookmark the permalink.