While trying to work on my DOS 5.0 article, I looked at DOS 5.0 build 224 from June 1990, which is the oldest surviving beta of DOS 5.0. And the README contains the following intriguing text, which reminded me of previous WordStar ruminations:

This is of course maddening because it does not mention which version of WordStar might have trouble. Version 3.x? Version 4.x, which is in fact newer than WordStar 2000? Some other version? There were more than a few. Well, let’s try WordStar 3.24 (early 1983) since that’s what I happen to have on hand: 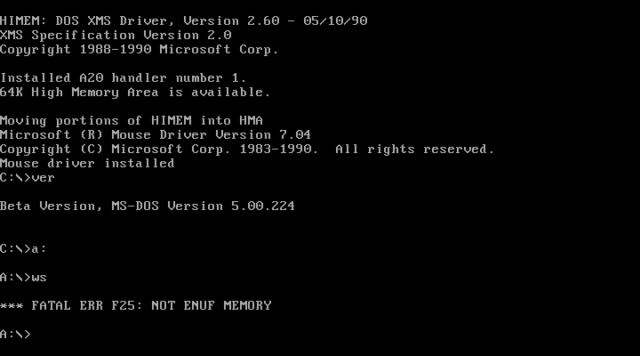 Yep, there certainly is some kind of problem. But lack of memory? Unlikely. So what is it then?

Maybe my CALL5 utility might shed some light on the problem? Let’s see… 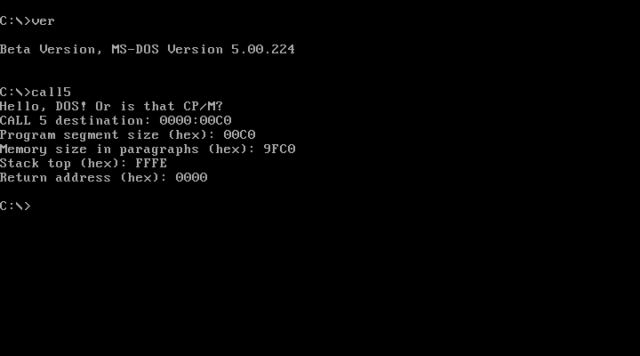 This PSP is not right

Lucky guess, indeed it did. Notice that in this beta of DOS 5.0, the CALL 5 interface still works (otherwise CALL5.COM wouldn’t produce any output), but the CALL 5 destination is 0000:00C0 (i.e. the INT 30h vector) instead of the usual F01D:FEF0 or so. The upshot is that the reported program segment size is 0C0h (192 bytes) and not the usual 0FEF0h (65,264 bytes). That might conceivably cause problems, and it certainly upsets old WordStar 3.24 because it thinks there isn’t enough memory.

So what does that tell us? I’m not sure. WordStar 3.24 clearly uses the CP/M-compatible information in the word at offset 6 in the PSP, but I see no evidence that it uses CALL 5 (I put a breakpoint on the entry point, and it never triggered while running WS). So if the goal was just to keep WordStar 3.2x going, it would be enough to put the right information into the PSP at offset 6 and forget about the CALL 5 interface. So who needs the CALL 5 interface which requires the address wraparound shenanigans? The mystery remains.

To recap the current knowledge: WordStar 3.24 (released around February 1983) is the oldest surviving version for the IBM PC that could be thoroughly examined. It was found to rely on the word at offset 6 in the PSP, but not use the CALL 5 interface. So this version of WordStar alone cannot explain the need for address wraparound and A20 line control.

There were earlier versions of WordStar. Version 3.20 is known to have existed, and 3.21 also existed. Currently there is no reason to believe that those were substantially different from version 3.24.

It is known that WordStar 3.02 was the earliest version for the IBM PC, and it was potentially significantly different from version 3.20. The reason to suspect such difference is that version 3.2x also supported CP/M-86 (the overlays are identical between DOS and CP/M-86, only the main executable is different), but 3.02 predates the appearance of CP/M-86.

Version 3.20 of PC DOS WordStar has turned up in the meantime, and indeed it’s not substantially different from 3.24. There is good reason to believe that there never was a version of WordStar for DOS that used the CALL 5 interface, since it was derived from the CP/M-86 version using INT E0h, not from the 8080 CP/M version. It’s not clear when WordStar 3.20 for PC DOS was released, but it was probably in July 1982.

Finally, in the meantime, other programs that rely on A20 wraparound for reasons entirely unrelated to CP/M compatibility and the PSP have come to light.

This entry was posted in DOS, PC history, WordStar. Bookmark the permalink.