On some systems, Windows 3.1 and 3.11 in Standard mode crashes when it is configured to use APM, i.e. POWER.DRV is loaded. The crash only happens in Standard mode, not the typical default 386 Enhanced mode. 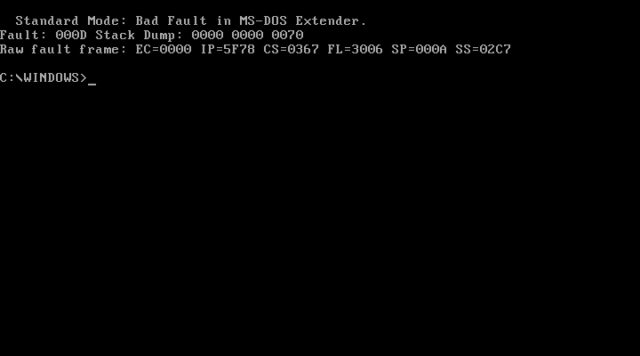 Since POWER.DRV is involved (“MS-DOS System with APM” vs. “MS-DOS System” in Windows setup), it’s obvious that power management/APM is somehow significant, but how, and why is only Standard mode affected? The explanation is a bit complicated.

Let’s start by looking at what may cause the crash. Windows 3.1 (specifically POWER.DRV) enters the idle state and calls APM service equivalent to INT 15h/5305h, CPU Idle. The call is executed using the 16-bit protected-mode interface. There are other possible failure modes which involve different APM services.

The idle-state crash is caused by the APM BIOS attempting to execute the HLT instruction with CPL (Current Privilege Level) other than zero, i.e. other than the highest privilege. The CPU state indicates that IOPL is 3 and CPL is 3 as well. The strange Intel x86 design is highlighted here: User code running with IOPL 3 can disable interrupts (CLI) and enter an endless loop, but it is not allowed to execute the HLT instruction.

Some APM implementations use port I/O to do their work; such systems have no trouble. But implementations trying to execute HLT or other instructions requiring CPL of 0 will crash Windows 3.1 in Standard mode.

This problem is unquestionably a bug in Windows 3.1. The APM 1.0 specification clearly states that “The code segment descriptor must specify protection level 0, and the BIOS routines must be invoked with CPL = 0 so they can execute privileged instructions.”

Microsoft violated the APM requirements, but the problem is only visible on systems which provide APM (not all do), provide a 16-bit protected-mode APM interface (not all do), and execute instructions which require CPL = 0 and not just IOPL = 3 (again not all do).

The crash is reproducible on IBM ThinkPad T42 as well as in some virtualized environments. It is not clear if systems affected by this bug existed in 1992/1993 when Windows 3.1/3.11 was released. The workaround is to either use 386 Enhanced mode, disable POWER.DRV (e.g. comment it out in SYSTEM.INI) in Standard mode, or possibly prevent APM from offering the 16-bit protected-mode interface by hooking and modifying INT 15h.

This entry was posted in Bugs, Windows. Bookmark the permalink.