What’s in a Name?

The following four processors are much more similar than one might think: 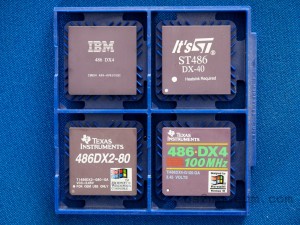 486 aficionados will recognize the processors made by IBM, ST Microelectronics, and Texas Instruments to be essentially one and the same model—Cyrix 486DX.

These processors are not to be confused with the infamous Cyrix 486DLC, an upgrade processor designed for 386 boards. The Cyrix 486DX was a true 486 with built-in FPU, power management, and 8KB on-chip write-back cache, designed for 486 boards.

Since Cyrix was a fabless chip design company, the Cyrix processors were built by several established microelectronics manufacturers. The processors were sold under both the Cyrix brand as well as the IBM, ST, and TI brands.

It’s worth noting that while AMD produced 486-core processors well into the late 1990s (the 133MHz AMD 5×86-P75, billed as a cheap 75 MHz Pentium equivalent), Cyrix fully focused on systems with the Pentium socket and it doesn’t appear that Cyrix ever made 486s faster than 100MHz (the short-lived Cyrix 5×86 is a different story).

As a side note, the Texas Instruments DX4 is sure to be a top contender for the world’s most colorful x86 processor ever.

This entry was posted in 486, Cyrix. Bookmark the permalink.